NASA's Parker Solar Probe, the first human-made object to fly into the Sun's corona, completed its first solar flyby on November 11, collecting a wealth of unprecedented data about the workings of our magnificent home star. And now, weeks later, that data is arriving home.

It may be a little bit of a wait for scientists to analyse it and start coming through with some papers, but in the meantime, we have a feast for our eyes: Parker has sent back its first photo from its new home orbiting the Sun.

Taken by the spacecraft's WISPR (Wide-field Imager for Solar Probe) instrument, the image shows a coronal streamer, also known as a helmet streamer - a loop of electrically charged coronal gases and plasma connecting two regions of opposite polarity on the Sun, extended by the Solar wind.

Usually pictures we obtain of these streamers look more like this, so, from a distance of just 27.2 million kilometres (16.9 million miles), Parker is already providing a much more detailed perspective of the streamer's structure, with at least two visible rays. 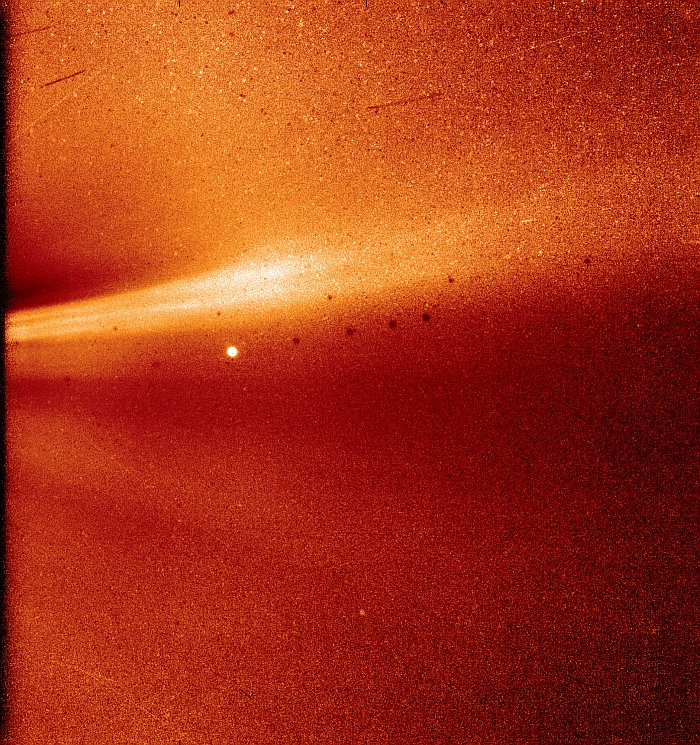 That bright dot you see is actually Mercury, waving from the background. Hi, Mercury! And the black dots are an artefact from background correction.

NASA hasn't told us what temperatures were like at the time Parker snapped this shot, but the probe is equipped with state-of-the-art heat shielding that will protect it up to the temperatures of 1,644 Kelvin (1,370 degrees Celsius or 2,500 degrees Fahrenheit) it's expected to reach.

The next flyby is slated to begin on April 4 next year, but scientists have plenty to sink their teeth into for the time being.

"We don't know what to expect so close to the Sun until we get the data, and we'll probably see some new phenomena," said Parker project scientist Nour Raouafi.

"Parker is an exploration mission - the potential for new discoveries is huge."