Human bodies cannot function properly above a certain altitude. We work best at sea level, where oxygen levels are adequate for our brains and lungs.

But if climbers want to summit Mount Everest, the tallest peak in the world at 29,029 feet (8,848 meters or 5.5 miles) above sea level, they have to brave what's known as "The Death Zone" – the altitude above 8,000 meters where there is so little oxygen that the body starts to die, minute by minute and cell by cell.

Recent overcrowding on Everest has resulted in the deaths of at least 11 people this past week. In the Death Zone, climbers' brains and lungs are starved for oxygen, their risk of heart attack and stroke is increased, and their judgment quickly becomes impaired.

There is a dangerous lack of oxygen at the top of Mount Everest. One mountaineer says it feels like 'running on a treadmill and breathing through a straw'

At sea level, the air contains about 21 percent oxygen. But when humans reach altitudes above 12,000 feet – where oxygen levels are 40 percent lower – it takes a huge toll on our bodies.

Jeremy Windsor, a doctor who climbed Everest in 2007 as part of the Caudwell Xtreme Everest Expedition, told Everest blogger Mark Horrell that blood samples taken from four mountaineers in the Death Zone revealed that the climbers were surviving on just one-quarter of the oxygen they needed at sea level.

"These were comparable to figures found in patients on the verge of death," Windsor said.

Five miles above sea level the air has so little oxygen in it that even with supplementary air tanks, it can feel like "running on a treadmill and breathing through a straw," according to US mountaineer and filmmaker David Breashears.

Climbers need to acclimate themselves to the lack of oxygen, but doing so can put people at risk for a stroke or heart attack

This lack of oxygen tends to result in myriad health risks. When the amount of oxygen in your blood falls below a certain level, your heart rate soars to up to 140 beats per minute, increasing your risk of a heart attack.

Climbers have to give their bodies time to acclimate to the lung-crushing conditions in the Himalayas before attempting to summit Everest. 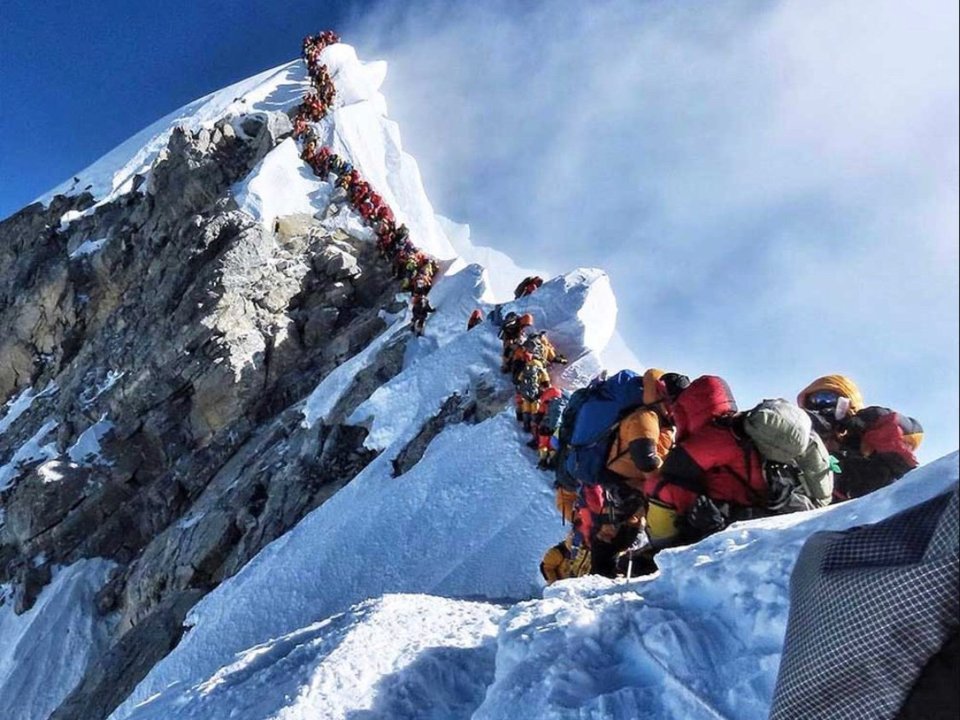 Expeditions generally make at least three trips up the mountain from Everest Base Camp (which is higher than nearly every mountain in Europe at 17,600 feet), going a few thousand feet higher with each successive trip, before making a push for the top.

Over the course of weeks, the body starts to make more hemoglobin (the protein in red blood cells that helps carry oxygen from the lungs to the rest of the body) in order to compensate for the change in altitude.

But too much hemoglobin can thicken your blood, making it harder for the heart to pump blood around the body. That can lead to a stroke or the accumulation of fluid in your lungs.

A quick stethoscope check can reveal a clicking sound as fluid that's leaked into the lungs rattles around – a condition called high altitude pulmonary edema (HAPE).

Symptoms include fatigue, a feeling of impending suffocation at night, weakness, and a persistent cough bringing up white, watery, or frothy fluid. Sometimes the coughing is so severe that it cracks or separates ribs.

Climbers with HAPE are always short of breath, even when resting.

In the Death Zone, your brain can start to swell due to lack of oxygen, which can lead to nausea and a form of high-altitude psychosis

One of the biggest risk factors at 26,000 feet is hypoxia, a lack of adequate oxygen circulation to organs like your brain. That's because acclimatization to Death Zone altitudes isn't possible, high altitude expert and doctor Peter Hackett told PBS.

If your brain doesn't get enough oxygen, it can start to swell, causing high altitude cerebral edema (HACE), which is HAPE for the brain. This swelling can trigger nausea, vomiting, and difficulty thinking and reasoning.

An oxygen-starved brain means climbers sometimes forget where they are, entering a delirium that some experts consider a form of high-altitude psychosis.

Hypoxic climbers' judgment becomes impaired, and they have been known to do strange things like start shedding their clothes or talking to imaginary friends.

Other possible dangers include appetite loss, snow blindness, and vomiting

Impaired judgment and shortness of breath aren't the only things high-altitude climbers have to worry about. "Humans will start to deteriorate," Hackett added.

Nausea and vomiting from altitude sickness, including HAPE and HACE, will cause a decrease in appetite. The glare from the endless snow and ice can cause snow blindness – temporary vision loss, or burst blood vessels in your eyes.

Some climbers are injured or perish from the indirect results of these high-altitude health problems. Physical weakening and impaired vision can lead to accidental falls.

Incorrect decision-making – from exhaustion or lack of oxygen – can mean forgetting to clip back into a safety rope, or straying from the route, or failing to properly prepare life-saving equipment like supplementary oxygen tanks. 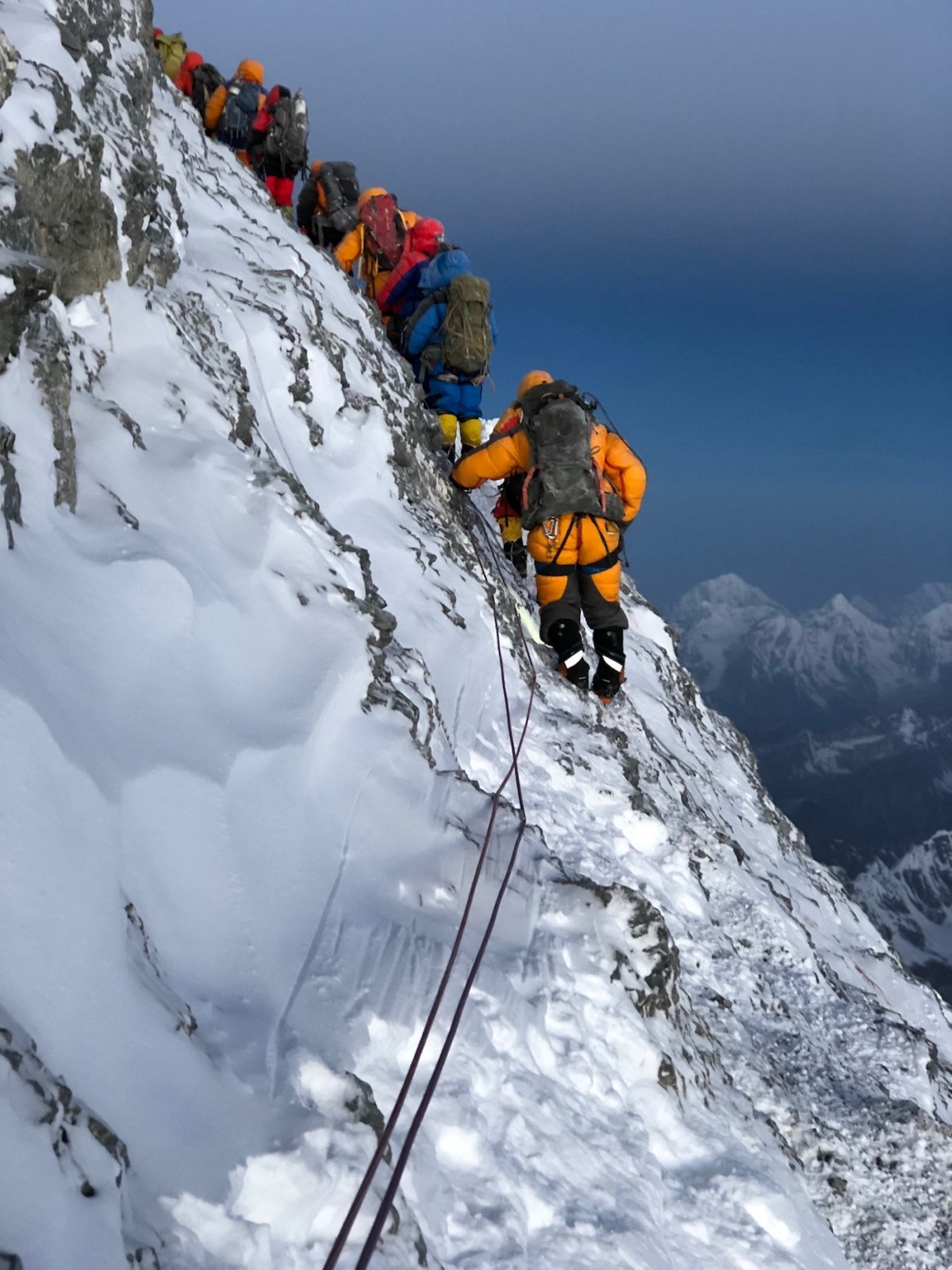 Mountaineers survive the Death Zone by trying to climb it in a day, but people are currently stuck waiting for hours, which can be deadly

All told, climbing in the Death Zone is "a living hell," as Everest climber and 1998 NOVA expedition member David Carter told PBS.

Typically, climbers attempting to bag the summit try and make it up and down in a single day of flurried activity, spending as little time as possible in the Death Zone before returning to safer altitudes. But this frenzied push to the finish line comes at the end of weeks of climbing, during one of the hardest parts of the route up.

Lhakpa Sherpa, who's reached Everest's summit nine times (more than any other woman on Earth) previously told Business Insider that the day a group attempts to summit Everest is by far the most difficult section of the trek.

In order to summit successfully, everything must go right. Around 10 pm, climbers leave their haven in Camp Four at 26,000 feet, just on the edge of the Death Zone. The first chunk of their climb is done wholly in the dark, lit by starlight and headlamps.

Seven hours later, typically, climbers reach the summit. After a brief rest filled with celebrations and photographs, the expeditions turn around, making the 12-hour trek back to safety and arriving (ideally) before nightfall.

But recently, expedition companies noted that the peak became so choked with climbers scrambling to the summit during a rare period of good weather that people were stuck waiting in the Death Zone for hours, leading some to collapse from exhaustion and die.

On May 22, when 250 climbers attempted to reach the mountain's summit, The Kathmandu Post reported, many climbers had to wait in line to go up and down the mountain. These extra, unplanned hours in the Death Zone made the difference between life and death for 11 people.