We Finally Know How Sunflowers Track The Sun Across The Sky

Scientists have known for centuries that sunflowers track the Sun across the sky, turning their flowers from east to west as the day progresses. But a team of scientists has finally been able to figure out exactly how this happens.

It turns out that sunflower swings are caused by an internal circadian rhythm, or body clock, and this daily shift in position not only improves the flowers' leaf size, but also makes them more attractive to bees.

"It's the first example of a plant's clock modulating growth in a natural environment, and having real repercussions for the plant," said lead researcher Stacey Harmer from the University of California, Davis.

Since 1898, scientists have observed sunflowers start the day facing the east, swinging during the day to face the west, and then return to the east overnight. But no one has been able to work out what regulates this process.

To see if the plants had their own biological clocks that were reset daily by the Sun, similar to our own, or were simply moving according to a pre-determined schedule, the team performed a series of experiments.

First they staked the plants so they couldn't move, or faced their pots west at the start of the day to interfere with the signals they would usually receive from the Sun, and showed they were able to disrupt their movement.

They then brought the flowers into an indoor lab with a fixed artificial light, and observed that for a few days the flowers continued to sway back and forth. "That is the kind of behaviour you would expect from a mechanism driven by an internal clock," Harmer explained.

Next, the researchers created an artificial 'daylight' cycle with the artificial light by turning a light on in the east in the mornings, and then in the west in the evenings.

But what's actually causing the plants to move? The team showed that this is a result of one side of the stem growing faster than the other, depending on the time of day, causing the plant to swing its head.

So, in the mornings, the researchers found that certain genes were being expressed at higher levels on the east side of the plant's stem, and in the afternoon, this pattern switched.

Harmer explained that this type of growth is different to the plant's regular growth, and occurs on a daily, 24-hour cycle.

Importantly, all this movement had some pretty big benefits for the plants. Throughout their experiments, the team showed that flowers tethered away from the Sun had leaves that were 10 percent smaller on average.

And plants that had been turned to face the west at the start of the day received five times more bees and other insects than those pointing eastwards, suggesting there's an evolutionary benefit to the plants chasing the Sun.

Below you can see how the temperature of sunflowers changes throughout the day, with the red indicating warmer temperatures: 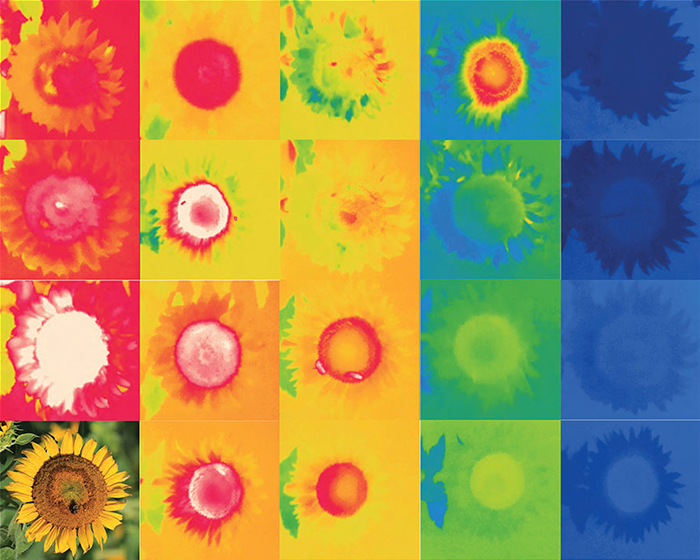 All of this might sound pretty obvious for gardeners who've been watching their sunflowers shift throughout the day for years, but it's the first time scientists have been able to link gene expression with the behaviour of a plant in the field.

Demonstrating that circadian rhythms can help plants grow has been one of the "holy grails" of this field of research, Dartmouth College's C. Robertson McClung, who wasn't involved in the new study, told Emily Benson at New Scientist. "And this is one of the best proofs that’s out there at this point."

The research has been published in the journal Science.