Some archaeological finds have to be seen to be believed, and the discovery of the 2,200-year-old grave of a male Celtic warrior has experts very excited indeed – as you'll understand once you take a peek at the haul.

Among the findings in the grave is an ornate shield described as "the most important British Celtic art object of the millennium" by archaeologist Melanie Giles from the University of Manchester in the UK, as reported by the Independent.

Made in an early Celtic art style known as La Tène, the shield features an unusual scalloped edge and a triple spiral design called a triskele. The shield also shows organic forms such as mollusc shells, along with signs of having been repaired. 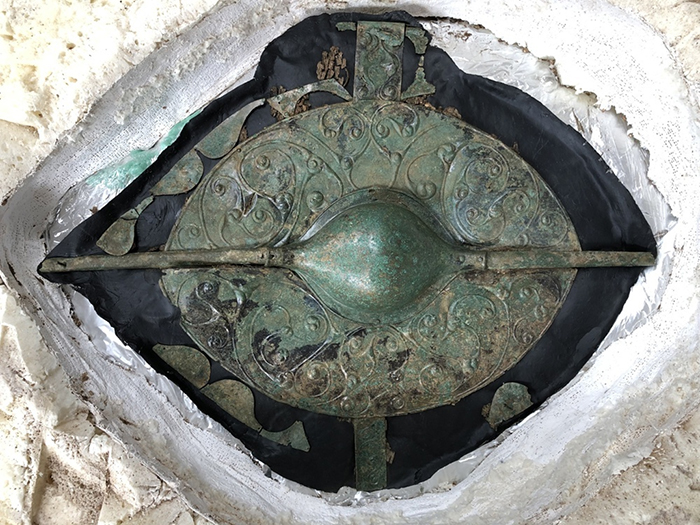 "The popular belief is that elaborate metal-faced shields were purely ceremonial, reflecting status, but not used in battle," says archaeologist Paula Ware from the MAP Archaeological Practice in the UK, according to the Yorkshire Post.

"Our investigation challenges this with the evidence of a puncture wound in the shield typical of a sword. Signs of repairs can also be seen, suggesting the shield was not only old but likely to have been well used."

Measuring 75 centimetres or nearly 30 inches across, the shield would have been crafted by hammering a bronze sheet of metal from underneath. Any leather and wood trappings that once existed on the defensive weapon have since rotted away.

Besides the shield, in a rather grim turn the grave also features what looks to be a chariot, complete with horses – though it's not clear if the horses were sacrificed for the purposes of the burial or had already died beforehand.

"These horses were placed with their hooves on the ground and their rear legs looking as though they would leap out of the grave," Ware explained. 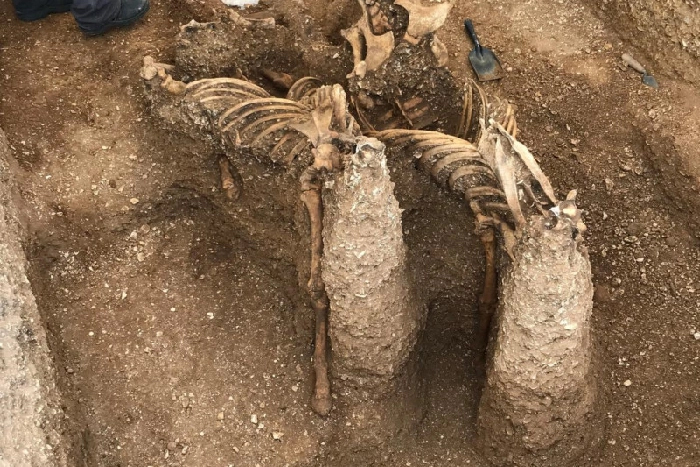 Seeing all this weaponry, a method of transportation, and provisions packed into the grave indicates how seriously Celtic tribes of the time considered the move to the afterlife. The society that this warrior would have lived in would have wanted to give him as much help as possible in whatever came next.

The man himself is thought to have been in his late 40s or older when he died, sometime around 320-174 BCE. Nothing like this type of burial has ever been seen in the UK before, although another chariot-and-horse grave was uncovered in Bulgaria in 2013.

These latest findings haven't yet appeared in a peer-reviewed paper, but come from a burial site originally uncovered in 2018, near the town of Pocklington, Yorkshire. A red glass brooch and pig remains (another potential animal sacrifice) have also been discovered in the same grave.

As work continues on the artefacts uncovered from the site, expect to hear more about this ancient warrior and his unusual burial in the months and years to come – there are still plenty of unanswered questions.

"We don't know how the man died," Ware said, according to the Yorkshire Post. "There are some blunt force traumas but they wouldn't have killed him. I don't think he died in battle; it is highly likely he died in old age."

"What his role was I can't tell you. He has collected some nice goodies along the way – he is definitely not run of the mill."