This Map Shows All The Claims on The Arctic Seafloor

The bottom of the Arctic Ocean has been in the news this week, with the US finally giving Shell permission to drill oil from its depths, and Russia submitting an updated territorial claim that states it owns an additional 1.2 square kilometres of seabed near the North Pole - some of which Denmark and Canada already assert ownership of.

This has led to a lot of technical debate about who owns what, geographically speaking. And as a result, Durham University's Centre for Borders Research (IBRU) in the UK has released an updated version of its Arctic seabed map, showing all "claims to Arctic seabed resources that have been made, or could potentially be made, by Canada, Denmark, Russia, Norway, and the USA", as director of IBRU Philip Steinberg writes for The Conversation.

You can see the full version of this new map below (and a high res version here), and IBRU has also released a simplified version that just shows the old and new land claimed by Russia. 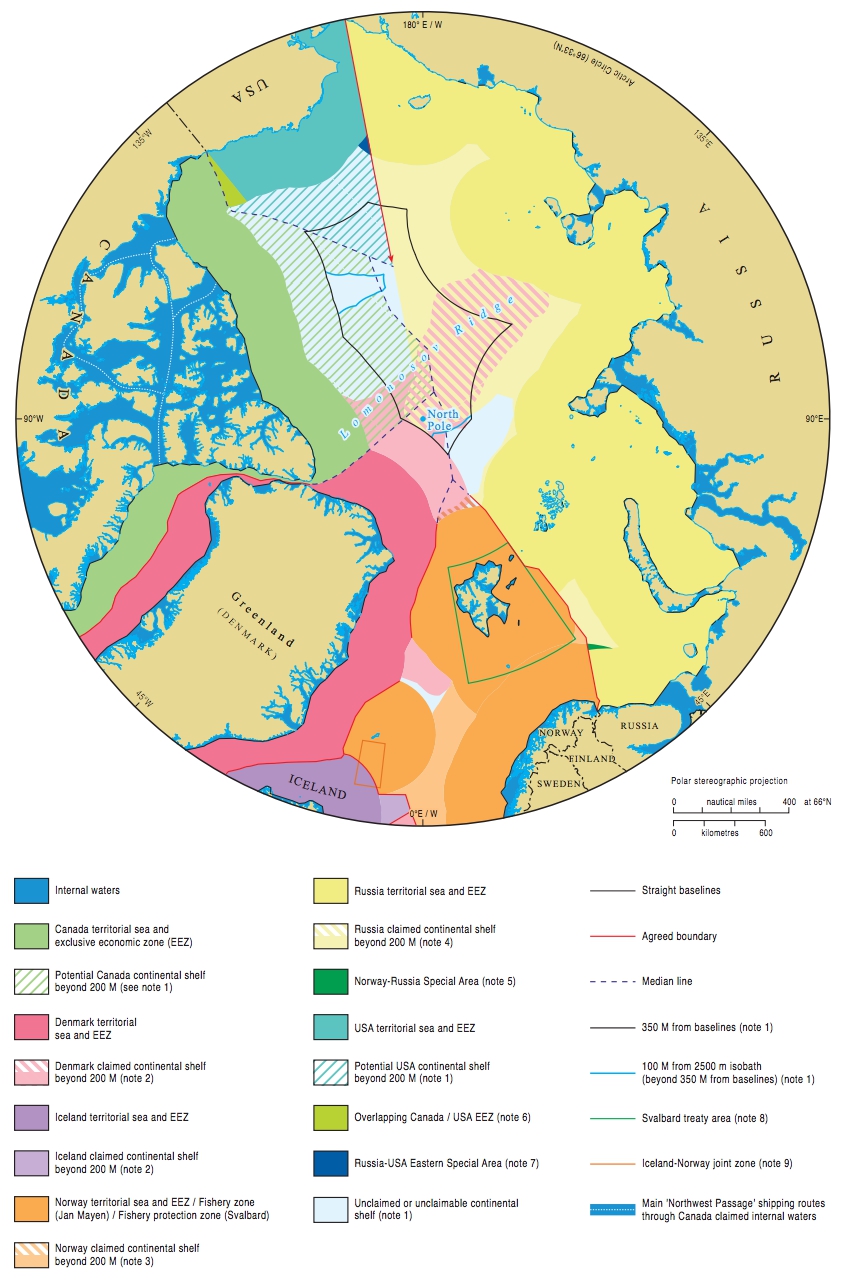 As you can see, there's a whole lot of overlap and different borders outlined by different treaties on the map. But that doesn't mean there's any political tension or 'land grabbing' going on, so what's causing all the confusion?

According to the United Nations Convention on the Law of the Sea, which decides which parts of the seabed are owned by which countries, a nation's territorial claims are linked to their undersea geology.

That sounds simple enough, but in practice, mapping that geology is pretty tricky, and so when the law was passed in 1994, each coastal nation was automatically given control over an exclusive economic zone (EEZ) that extends 370 kilometres off its shoreline until they could provide geological proof that they deserved more or less.

Since then, several countries have done just that, and it's enabled nations including Australia and New Zealand to expand their seabed territories by 50 percent, as Lucas Laursen explains for Science. So why all the media excitement over Russia increasing its claim? According to Steinberg, it might have something to do with people assuming political tension is involved in the decision.

"In the context of Russia’s expansion into non-Arctic territories (notably in Crimea), the revised Russian claim has struck the media as another tale of Russian expansion," Steinberg writes. "Provocative headlines noted that, with the filing, 'Russia claims North Pole for itself' in a 'Move to seize oil and gas rights'."

But in reality, Russia first made the claim for new land back in 2001, and this update only asks for an additional 103,000 square kilometres on top of that. Yes, this is the first time their demands extend into land that Denmark and Canada have also submitted claims for, but that doesn't mean they're starting the next Cold War. In fact, the countries claiming ownership over the Arctic have all worked closely together scientifically to create these geographical maps in the first place, says Steinberg.

"In short, little is actually happening on the international seabed - in the Arctic or elsewhere - other than states using science to claim the limited economic rights that are reserved for them by international law," he explains over at The Conversation. "These filings should therefore be celebrated as reaffirmations of the will toward peace and stability, rather than feared as unilateral acts of aggression."

So check out the beautifully drawn map above and marvel at all the scientific research that's gone into creating it. But don't freak out too much about Russia trying to take over the North Pole just yet.