Let's face it, the weather's been pretty batsh*t crazy in 2017 so far - Oklahoma hit temperatures of 100°F (38°C) in the depths of winter, and California is on the verge of a mega-flood.

But according to the US Geological Survey, it's only going to get stranger, with spring coming unseasonably early to the majority of the country this year.

Spring officially starts on the 20 March 2017 for the US, but over the past decade, weather and phenomena usually associated with the season, such as tree and flower blooming, has been happening earlier and earlier.

Now the USGS has released a new set of research-backed maps showing that, from a flowering point of view, spring will come at least two to three weeks early across almost the entire southeast, from San Antonio to Atlanta to Washington DC - and from there will continue to roll north. 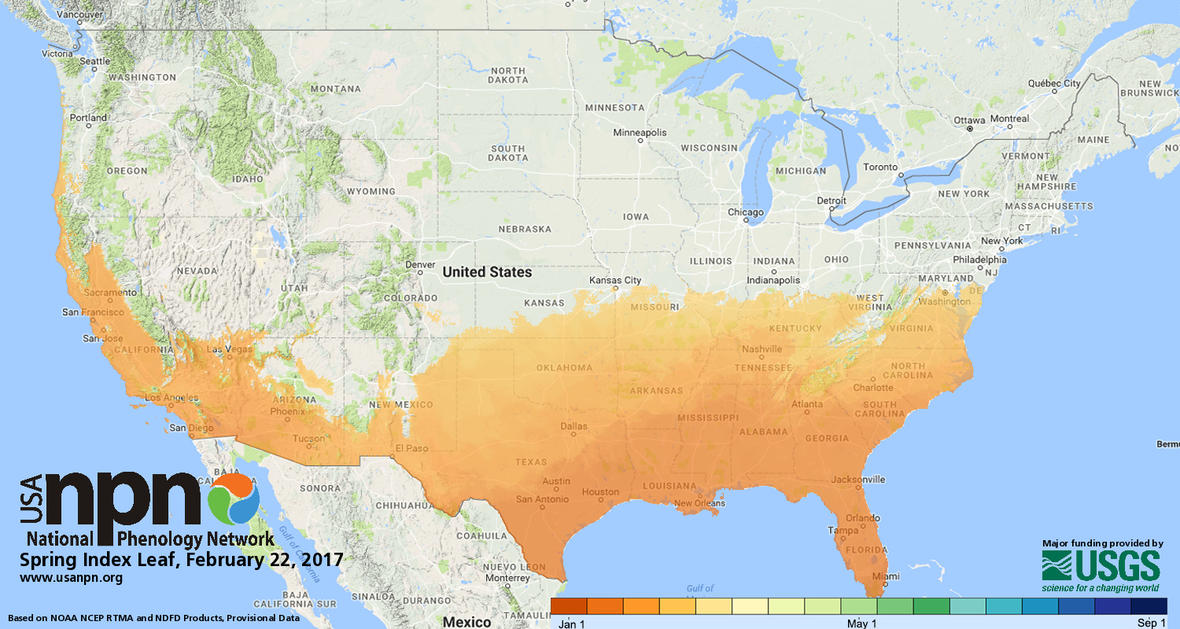 The colour scale down the bottom is broken down into two week blocks. That means that all the coloured parts of the map are already in spring as of 22 February.

You can see that data interpreted by date instead in the animation below:

"While we've known for over a decade now that climate change is variably advancing the onset of spring across the United States, a new set of maps … now demonstrates just how ahead of schedule spring is in your precise neck of the woods," the USGS wrote in a press release.

So how do scientists measure when spring has arrived? These dates are based on something called the Spring Leaf Index, which looks at the amount of plant blooming activity in a region - as well as recent temperature conditions - to assess whether spring has arrived.

To figure this out, researchers looked at two common flowers - lilacs and honeysuckles - which are both temperature-sensitive flowering plants.

A team collected data from across the country on when enough heat had accumulated for these two species to begin to bloom - which is part of a field of study known as phenology.

This work is led by the USGS-funded US National Phenology Network (USA-NPN), and they also gathered recent heat and temperature data from the US National Oceanic and Atmospheric Administration (NOAA) - including daily data used for the National Weather Service, and historical daily data from a database maintained by Oregon State University.

When the team applied the plant blooming models to the recent weather data, they were able to create national-scale daily maps of leaf emergence for these species, showing where spring had sprung across the country.

The team then compared the daily maps from this year to the long-term average - maps created between 1981 and 2010 - to assess how much earlier spring was coming than normal.

It's the same technique used by another recent study that looked at trends over the past 112 years, and showed spring is arriving earlier than it ever has in half of all national parks in the US.

And when you consider the fact that 16 of the 17 hottest years on record have all occurred since 2000, it's not too surprising that plants are blooming earlier than they usually would.

It's not just the US either, with spring coming at least a week earlier in the UK these days, something that light pollution could also be playing a role in.

Although most of us are happy to see the back of winter, the USGS scientists stress that this early spring has far-reaching effects that we don't yet fully understand.

"While these earlier springs might not seem like a big deal - and who among us doesn't appreciate a balmy day or a break in dreary winter weather - it poses significant challenges for planning and managing important issues that affect our economy and our society," said USGS ecologist Jake Weltzin.

The effect on plants is obvious, but the early blooming of plants across the country also has an impact on the arrival of birds, bees, and butterflies that feed on and pollinate these species. Sometimes an early spring can actually benefit pests and invasive species, the researchers add.

And we're likely to be impacted too. Not only does an early spring bring a longer hay fever season, it also gives disease-carrying pests such as ticks and mosquitoes more time to bite us.

It's too early to say for sure how an early spring is affecting our ecosystems, but it's something researchers are going to need to get a handle on soon. Because if this latest data is anything to go by, spring is just going to keep coming earlier and earlier, whether we're ready for it or not.

The maps are available in full on the USA-NPN website.

Trending News
A New FRB Signal Has Buzzed Nearly 2,000 Times in Just Two Months, Raising a Mystery Space3 days ago
There's Trouble Bubbling Up in Newly Formed Alaskan Lakes, And Scientists Are Worried Environment3 days ago
Does IQ Decline as We Age? One Type of Intelligence Peaks in Your Twenties Humans4 days ago