This Math Explains Why Cauliflowers Look Too Oddly Perfect

Have you ever stared at a cauliflower before preparing it and got lost in its stunningly beautiful pattern? Probably not, if you are in your right mind, but I reassure you it's worth a try.

What you'll find is that what at first sight looks like an amorphous blob has a striking regularity.

If you take a good look, you will see that the many florets look alike and are composed of miniature versions of themselves. In math, we call this property self-similarity, which is a defining feature of abstract geometrical objects called fractals. But why do cauliflowers have this property?

Our new study, published in Science, has come up with an answer.

There are many examples of fractals in natures, such as ice crystals or branches on trees. In math, the number of copies of an initial pattern goes on infinitely. Cauliflowers present a high level of such self-similarity, involving seven or more copies of the "same" bud.

This is most conspicuous on the romanesco cauliflower (sometimes called romanesco broccoli, because of its color), one of the first images that will appear if you search "plant fractals" online.

What is striking about the romanesco is the very well-defined, pyramidal buds which accumulate along endless spirals. Though less immediately obvious, a similar arrangement is present in other cauliflowers too.

Spirals are found in many plants, it is the main pattern of plant organization – a topic which has been studied for well over 2,000 years. But although cauliflowers share spirals with most other plants, their self-similarity is unique.

Where does this special feature come from? And are the cauliflower spirals originating from the same mechanisms as those in other plants?

About 12 years ago, two of my colleagues in France, François Parcy and Christophe Godin, were starting to ask exactly these questions and invited me to join the effort. We spent many hours frantically dismantling florets, counting them, measuring angles between them, studying the literature on the molecular mechanisms underlying the growth of cauliflowers, and trying to create realistic computational models of these mysterious cabbages.

Most available data was on Arabidopsis thaliana, also known as the "thale cress" flowering plant. Though this is a weed, it is of paramount importance in modern plant biology because its genetics have been extensively studied for many years, including many variants. And it turns out to be related to all cabbages, belonging to the family known as brassicaceae. 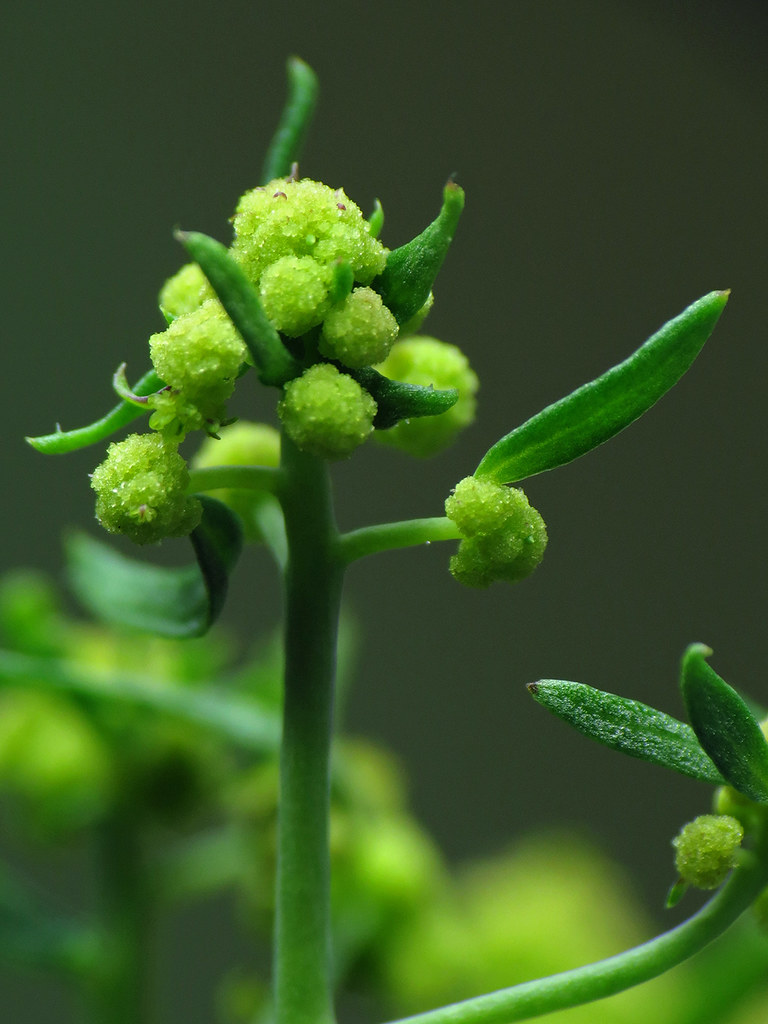 If you spend some time observing the branches along the stem of, say, some weeds in your garden (which likely include close relatives of Arabidopsis), you will see how they are quite closely following each other, with the same angle between each successive pair. And if there are enough organs along this spiral, you will start seeing other spirals, going both clockwise and anticlockwise (see image on the right).

If you manage to count the spirals, they will typically be numbers somewhere along the Fibonacci sequence, where the next number in the sequence is found by adding up the two numbers before it. This gives 0, 1, 1, 2, 3, 5, 8, 13, etc.

On a typical cauliflower, expect to see five spirals going clockwise and eight anticlockwise, or vice-versa (see images below). But why? To understand how the geometry of plants develop over their lifetime, we need mathematics – but also microscopes. 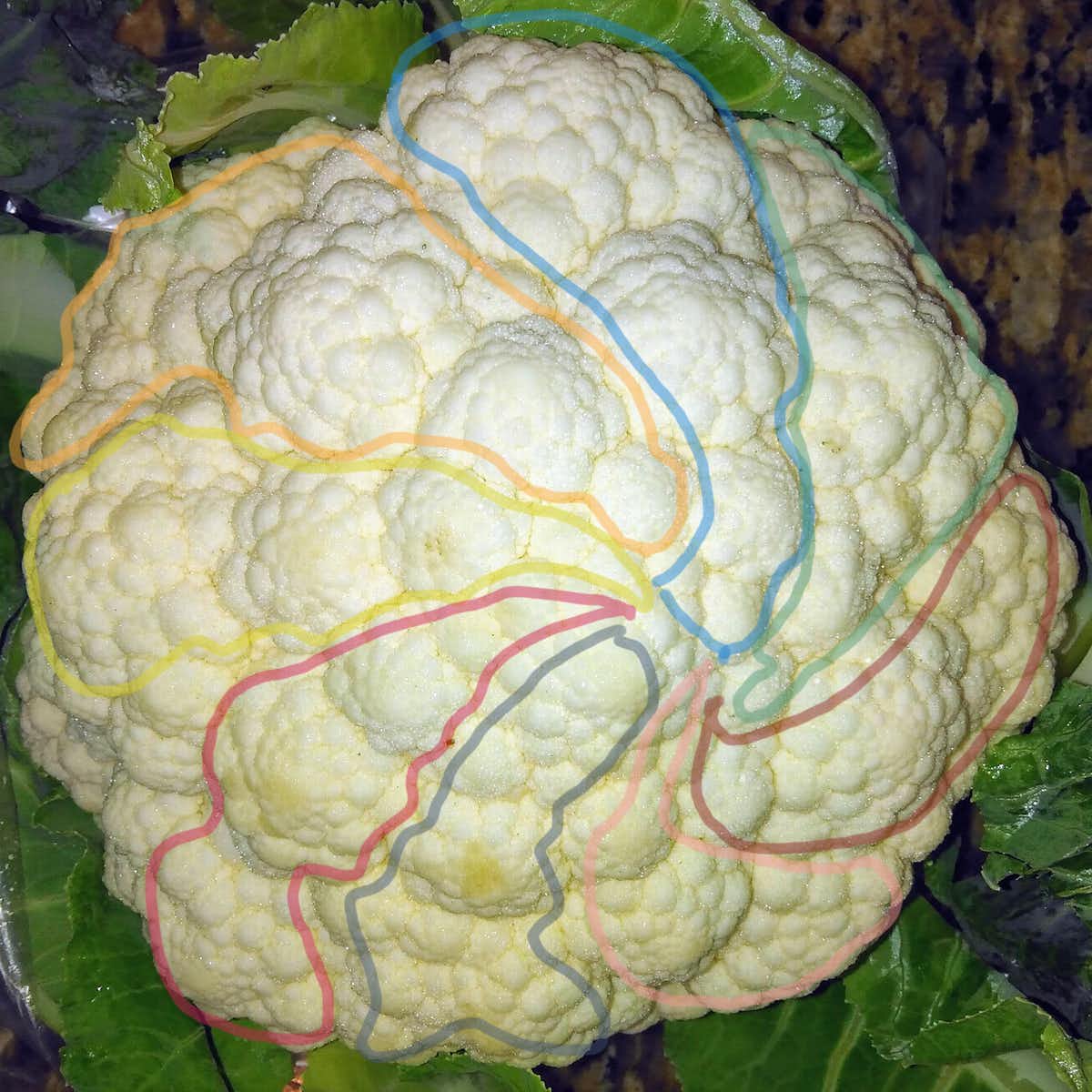 Eight anticlockwise spirals on the same cauliflower as above. (Etienne Farcot)

We know now that for every plant, the main spiral is already formed at microscopic scales. This happens very early in its development. At this stage, it comprises spots, in which very specific genes are expressed (turned on). The genes expressed in a spot determine whether this spot will grow into a branch, a leaf, or a flower.

But the genes are actually interacting with each other, in complex "gene networks" – leading to specific genes being expressed in specific domains and at specific times. This is beyond simple intuition, and mathematical biologists therefore rely on differential equations to write models of these gene networks to predict their behavior.

To work out how cauliflowers grow into their peculiar shape after the first few leaves have formed, we built a model which included two main components. These were a description of the spiral formation that we see in large cauliflowers, and a model of the underlying gene network that we see in Arabidopsis. We then tried to match the two so we could work out which genetics led to cauliflower structure.

We found that four main genes are the crucial players: their initials are S, A, L, and T, which we obviously joked about.

The "A" is missing in Arabidopsis flowering plants that have mutated to become cauliflower-like, and is also a gene that drives spots to become flowers.

What makes cauliflower so special is that these spots at the growing tip try to turn into flowers for some time (up to several hours), but keep failing at it for lack of "A". Instead, they develop into stems, which turn into stems, etc – multiplying almost infinitely without growing leaves, which gives rise to near-identical cauliflower buds.

The time they spend trying is fundamental – getting this right in our model allowed us to reproduce cauliflowers and romanescos exactly on the computer. We confirmed this was right by altering the growth in a real-life Arabidopsis cauliflower mutant plant, effectively turning it into a shape much alike a miniature romanesco.

It is amazing how complex nature is. The next time you have cauliflower for dinner, take a moment to admire it before you eat it.