For decades, scientists have been toying with the idea that our Universe is - or once was - a giant hologram, where the laws of physics require just two dimensions, but everything appears three-dimensional to us.

As you can imagine, it's not an easy hypothesis to prove, but physicists say they now have observational evidence from the early Universe that fits just as neatly into the so-called hologram principle as it does with the standard Big Bang model.

"We are proposing using this holographic Universe, which is a very different model of the Big Bang than the popularly accepted one that relies on gravity and inflation," says one of the team, Niayesh Afshordi from the University of Waterloo in Ontario, Canada.

"Each of these models makes distinct predictions that we can test as we refine our data and improve our theoretical understanding - all within the next five years."

To be clear, the researchers aren't saying we're living in a hologram right now. They're suggesting that in the very early stages of the Universe - a few hundred thousand years after the Big Bang - everything was being projected into three dimensions from a two-dimensional boundary.

If you're not familiar with the whole 'Our Universe is a hologram' saga, back in the 1990s, physicist Leonard Susskind popularised the idea that the laws of physics as we understand them don't technically require three dimensions.

So how could the Universe appear three-dimensional, but in reality, is only two-dimensional?

The basic idea is that the volume of space is 'encoded' on a boundary - or an observer-dependent gravitational horizon - which means it requires one less dimension than it appears.

Since 1997, more than 10,000 papers have been published supporting the idea, so it's a lot less crazy than it sounds.

Now Afshordi and his team report that after investigating irregularities in the cosmic microwave background - the 'afterglow' of the Big Bang - they've found strong evidence to support a holographic explanation of the early Universe.

"Imagine that everything you see, feel, and hear in three dimensions (and your perception of time) in fact emanates from a flat two-dimensional field," says one of the team, Kostas Skenderis from the University of Southampton in the UK.

"The idea is similar to that of ordinary holograms, where a three-dimensional image is encoded in a two-dimensional surface, such as in the hologram on a credit card. However, this time, the entire Universe is encoded." 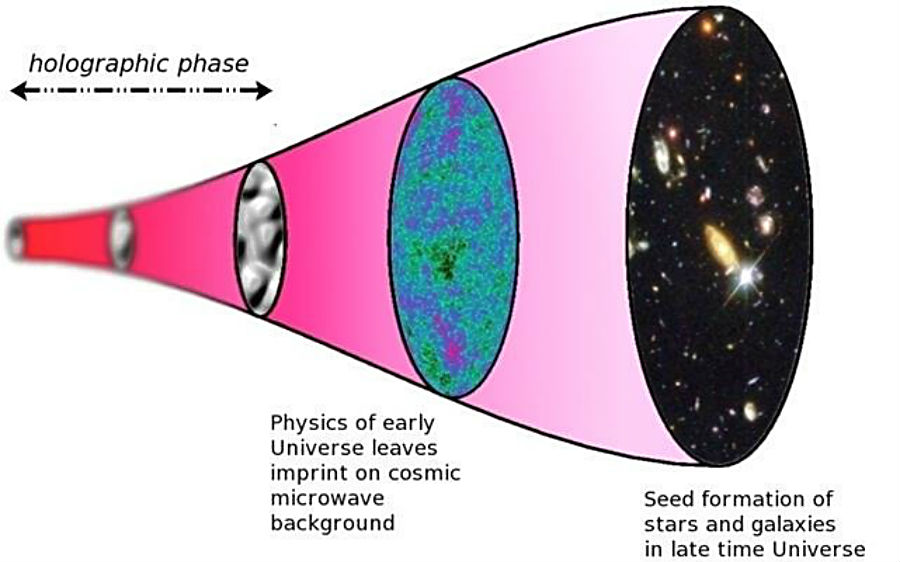 The reason physicists even entertained the hologram principle in the first place is because, while the standard model of the Big Bang sounds a whole lot more sensible, there are some gaps in it that are so fundamental, they hold our entire understanding of the laws of physics at bay.

According to the Big Bang scenario, chemical reactions caused a massive expansion that seeded the formation of our Universe, and at the very early stages, it inflated at break-neck speed.

While most physicists accept the reality of cosmic inflation, no one's been able to figure out the exact mechanism responsible for making the Universe expand faster than the speed of light, going from subatomic-sized to golf-ball-sized almost instantaneously.

In fact, just as our current theories of general relativity and quantum mechanics don't add up when we try to explain the behaviour of enormous things down to their very atoms, these fundamental laws of physics can't explain how all the ingredients of the Universe could be balled up into a mind-bogglingly small package.

"One [hypothesis] trying to reconcile the two, quantum gravity, says that if you ditch a spatial dimension, you can also ditch gravity in your calculations to make things easier," Ryan F. Mandelbaum explains for Gizmodo.

"It's holographic in the sense that there's a description of the Universe based on a lower dimensional system consistent with everything we see from the Big Bang," Afshordi told Mandelbaum.

To test how well the hologram principle could explain the happenings of the Big Bang and its aftermath, the team built a model with one time and two space dimensions.

When they inputted actual data from the Universe, including observations from the cosmic microwave background - thermal radiation emitted a few hundred thousand years after the Big Bang - they found that the two fit perfectly.

But there's a catch - it only fits perfectly when the model Universe is no more than 10 degrees wide.

The researchers say they're far from proving that our early Universe was actually a holographic projection, but the fact that observational evidence from the real world could explain missing parts of the laws of physics in two dimensions means we can't reasonably rule it out.

So does that mean there's a chance we're all living in a hologram right now? Not quite, says Afshordi - their model only applies to the Universe at its very early stages.

The question of how things transitioned from two dimensions to three is now anyone's guess.

"I would say you don't live in a hologram, but you could have come out of a hologram," Afshordi told Gizmodo. "[In 2017], there are definitely three dimensions."