This Mind-Boggling Map Explains How Everything in Mathematics Is Connected

Unless you were a total pro at mathematics in high school, you probably only have a vague recollection of things like geometry, algebra, and some guy called Isosceles (what a great name).

And that sucks, because mathematics is one of the most fascinating languages humanity has ever devised, but without university-level expertise, you're going to have a very bad time trying to figure out how things like chaos theory and fractal geometry tie in with machine learning and all those crazy prime numbers we keep finding.

Enter YouTuber Dominic Walliman, who last December delivered this incredible Map of Physics, and is now back to help us find - or reclaim - a passion for all things numbers.

"The mathematics we learn in school doesn't quite do the field of mathematics justice - we only get a glimpse of one corner of it, but mathematics as a whole is a huge, and wonderfully diverse subject," Walliman says in the video below.

To navigate this complex and busting Map of Mathematics, the best place to start is in the middle, where the orangey brown circle depicts the origins of human interest into how numbers explain our Universe: 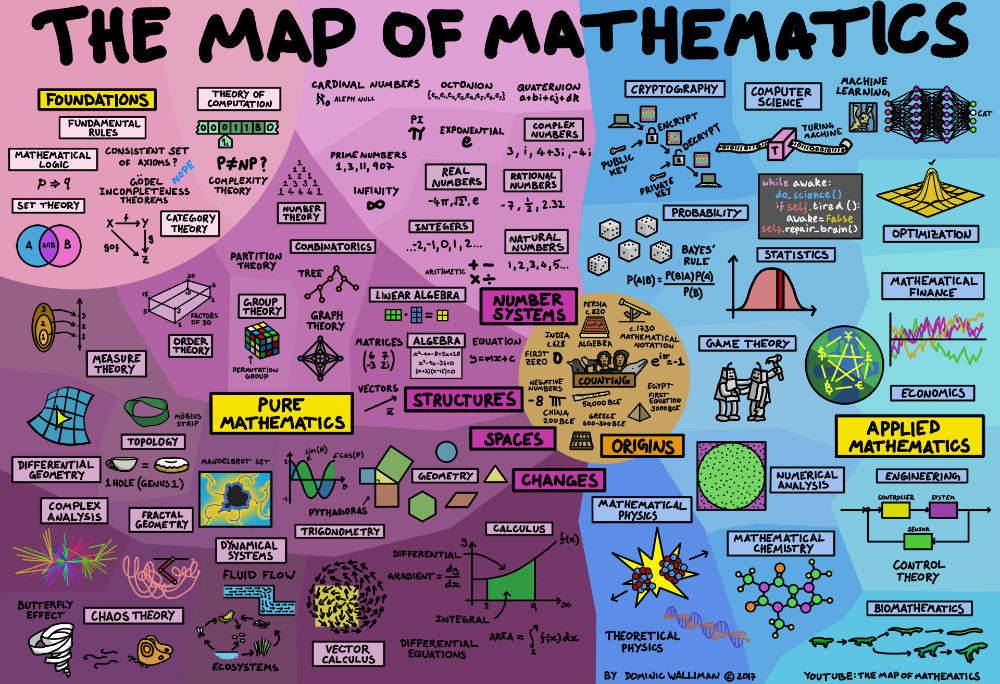 We've then got two main sections that represent the two major fields in mathematics today - Pure Mathematics (an appreciation of the language of numbers itself) and Applied Mathematics (how that language can be used to solve real-world problems).

You can mess around with and download a high-res, zoomable version here, and print it on a throw pillow here, because we all need something to look at on the couch when Taboo is getting a little too weird.

To fully appreciate Walliman's Map of Mathematics, you should definitely watch the video below to get the proper walkthrough.

All those names of things - topology, complex analysis, and differential geometry - might not sound like much to you now, but you'll soon learn that they're really just describing the shapes of things in our Universe, and the way those shapes change in time and space are explained by things like calculus and chaos theory.

Now that you've made it through the trickiest theoretical stuff, it's on to applied Mathematics, which applies to the disciplines of physics, chemistry, and biology, where number systems are integral to understanding how the Universe and everything in it behaves.

You've also got engineering, economics, and game theory, and probability, cryptography, and computer science - all of which simply wouldn't exist had our very cluey ancestors not laid the foundations of number-sleuthing for us centuries ago.

What's that? Mathematics literally applies to everything in life and the Universe? [Internal cheering by maths teachers intensifies]

If all of this sounds all too basic for you, don't worry, there's more to this map than just pure and applied mathematics.

It even covers what could be the biggest mystery of the entire discipline - how researchers examining the foundations of maths have failed to find a complete set of fundamental rules, called axioms, that are provably consistent across every little nook and cranny of the mathematical universe.

Check out the video below, and head here if you missed Walliman's Map of Physics.