This Mushroom Suit Digests Your Body After You Die

With all the focus on how we can reduce our carbon footprint in our lifetime, most of us forget that we continue to have a significant impact on the environment long after we die, thanks to our toxin-riddled funeral industry. But a team of designers has come up with a more eco-friendly option - a jumpsuit woven from mushroom-spore-infused thread called the Infinity Burial Suit.

Also known as the 'mushroom death suit', the idea is that the mushrooms will begin to grow from your body once you've been buried, slowly digesting you, while neutralising any environmental contaminants you harbour - such as pesticides, heavy metals, or preservatives - in the process. First announced to a whole lot of controversy five years ago, the suit will now officially go on sale as early as April this year, with the first test subject already locked in.

The suit relies on the power of mycoremediation, which is the ability for mushrooms to clean up toxic contaminants in the environment. "I was inspired by the idea that mushrooms are the master decomposers of Earth and thereby the interface organisms between life and death," artist and co-creator of the suit, Jae Rhim Lee, told Co.Exist.

Lee and her company, Coeio, have now confirmed their first test subject - 63-year-old Dennis White, who's suffering from a terminal neurodegenerative disease called Primary Progressive Aphasia. And they already have a waiting list of customers "in the hundreds" lining up to try the suit, which is estimated to retail at around US$999.

Due to popular demand, the team is also developing an Infinity Pod to help your pets' bodies return to nature, which they expect will be ready to be released as early as next month. 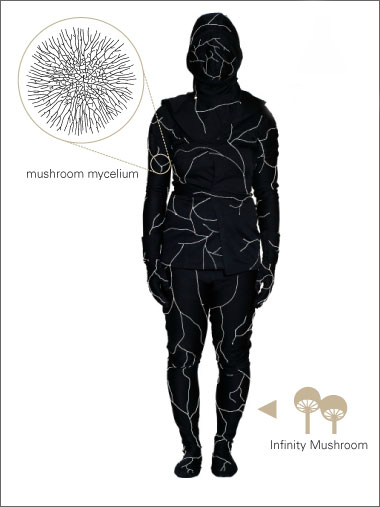 Coeio has kept quiet on the details of their 'Infinity Mushroom' strain, but what they have revealed is that Lee chose the strain by feeding a group of mushrooms her skin, hair, and nails, to narrow down the most efficient decomposers for the job.

That all sounds a little creepy - and the idea of being eaten by anything after death doesn't sit well with a lot of people. But there's a real need for better burial options.

Right now, we have to cut down trees to make our caskets, which are then coated in chemicals so they'll last for centuries, taking up a whole lot of valuable land in the process. And before we even make it into that casket, our bodies are pumped full of toxic formaldehyde.

Cremation may sound more natural, but it isn't much better, with our bodies needing to be burnt at temperatures between 760 and 1,150 degrees Celsius for 75 minutes - that's an incredibly energy-intensive process, and it also releases a significant amount of greenhouse gases and toxins into the environment. In the UK, for example, cremation is responsible for 16 percent of the country's mercury pollution thanks to all our old dental fillings.

Coeio aren't the only company trying to make death more eco-friendly - earlier this year, two Italian designers created a burial pod that turns your body into a tree, and the Urban Burial Project is working on creating open-plan funeral buildings where we can all decompose naturally.

"For every person who uses the Infinity Burial Suit, there will be many more who witness the choice to return to the earth and to use one’s body in a beneficial way," she said. "Cumulatively, this will help create a cultural shift toward a cultural acceptance of death and our personal responsibility for environmental sustainability."