If you're of the mindset that knowledge should be freely accessible to as many humans as possible, paywalls for academic journals can be downright frustrating. Now a free browser extension is promising to bust through those paywalls wherever possible.

Unpaywall was launched earlier this month by the open source not-for-profit Impactstory – funded by the National Science Foundation and the Alfred P. Sloan Foundation – and it's already making a splash in the traditional publishing industry.

Install the plug-in on your Chrome or Firefox desktop browser, and it will start displaying a little lock symbol whenever you're on the landing page of an article in an academic journal.

If the plug-in can find a freely accessible full-text copy of the paper you're looking at, the lock symbol turns from grey to green, and you can simply click on it to get the PDF. If the lock is gold, the article you're reading already has an open access licence. 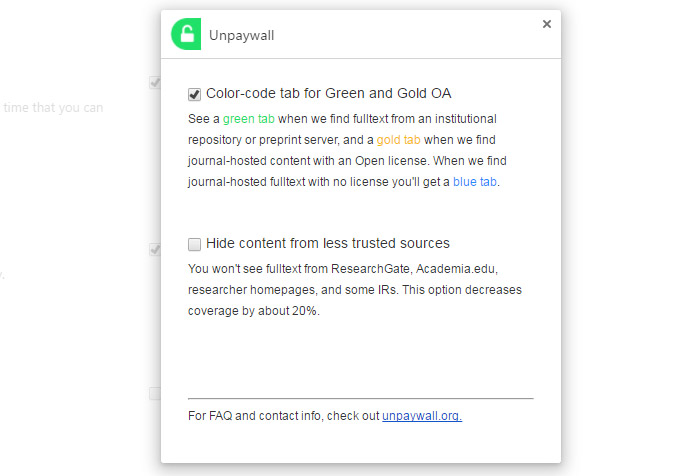 Best of all, the full-text copies it serves up are totally legal.

The plug-in works by scouring a database of over 90 million digital object identifiers (DOIs), looking for publicly accessible copies of papers on pre-press servers and university websites. This is what sets it apart from the 'pirated' route of the infamous Sci-Hub, which sources the same published content by decidedly greyer methods.

"Unpaywall finds PDFs legally uploaded by the authors themselves, while Sci-Hub uses PDFs that are obtained by other means, including automated web scraping of publisher sites," states the plug-in's website.

The plug-in's makers claim the extension can find full-text versions for "65-85 percent of articles, depending on their topic and year of publication".

When I tried it out on 30 random papers, the lock changed colour for 19 of them, giving me a 63 percent access rating (for a tiny, highly unscientific sample).

But most of those 19 papers turned out to be open access already, and I only got seven papers which would otherwise have been behind a paywall. That being said, it's still a hell of a lot better than nothing.

This approach is not dissimilar to scanning Google Scholar in the hopes it retrieves a PDF somewhere, but it's certainly much more convenient. And the fact that Unpaywall plugs into the growing force of open access licensing means it might actually change how university libraries choose which subscriptions to shell out for.

"For years, libraries have had little expectation that the [open access] deposit of subscription articles would displace subscription access, mainly because locating those articles and providing access to them would be labour-intensive," scholarly communications expert Rick Anderson from the University of Utah told Dalmeet Singh Chawla at Nature.

"By making that process so much easier, Unpaywall could really change the game for us."

Most of us don't have the cash to shell out 30-40 bucks at a time for one paper, so it's no surprise that people have been turning to all these other methods for accessing scientific research - some more legal than others.

And there is increasing support for even the shadier ones, like Sci-Hub. As Fiona Macdonald reported for us last year, it's really not the same as pirating a movie:

"[S]cientists don't actually make any money for publishing their research. While journals can charge anything upwards of US$10,000 per year for a single subscription, researchers have little choice but to submit their work to them if they want to continue to get hired.

For the most part, scientists get paid by grant money, which, you guessed it, is usually funded by our tax-payer dollars. So the real argument is this: if we're already paying scientists to do work for the public good, why can't we have access to the results of that work for free?"

With Unpaywall, it's now become easier to do just that.