This Orange Turned Purple Overnight, And Scientists Can't Figure Out Why

Either way, a bizarre phenomenon witnessed in Australia could mean we need to do a big rethink on oranges and associated vernacular, after a specimen of the fruit inexplicably turned purple last week.

On Tuesday, Queensland resident Neti Moffitt was cutting up the orange you see here as a snack for her two-year-old son.

At first, everything seemed fine. The fruit looked normal, and there wasn't anything unusual about its smell or taste. Moffitt's son sucked on three of the slices she'd cut up, and the remaining pieces were left on the kitchen counter.

It was the next day the family realised something strange was going on. When Moffitt saw the leftover orange slices on the kitchen bench the following morning, they weren't orange any more. They were purple.

"For the rest of the day and overnight they continued to develop this really amazing indigo colour," Moffitt told The Sydney Morning Herald.

"Everyone is so utterly intrigued and desperate to find the answer."

As you can see in the pictures she took, the exposed flesh of the cut pieces of orange had turned a striking shade of dark purple.

Moffitt says the purple appearance looks like the fruit pieces have been dipped into an ink pad, and the weird transformation wasn't limited to the pieces sitting on the kitchen counter overnight. 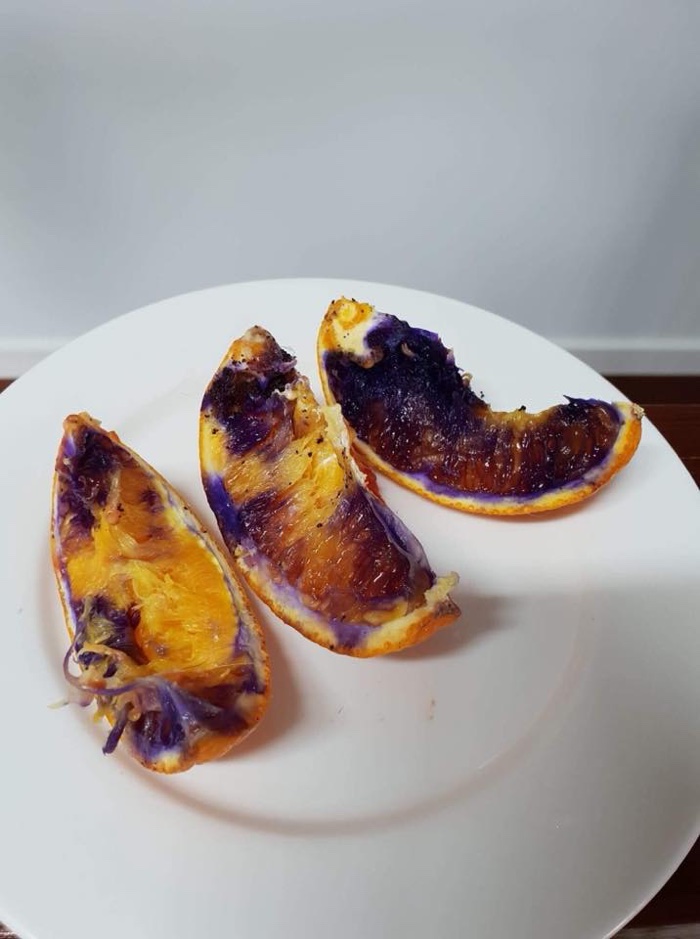 "I went rifling through the rubbish bin for the three bits eaten by my son, and sure enough they were more-so purple than the ones left out on the bench," she told ABC News.

"My first thought was I hope it has had no ill effect on my child. But he's fine, absolutely not a drama."

Three years ago, the same mysterious phenomenon was observed by another mother cutting up oranges for her children.

As fate would have it, this previous episode – which was never actually scientifically explained – also took place in a town in Queensland, Australia.

When Moffitt called local health authorities to come and examine her purple oranges this time around, it represented a rare chance to study this truly weird phenomenon. 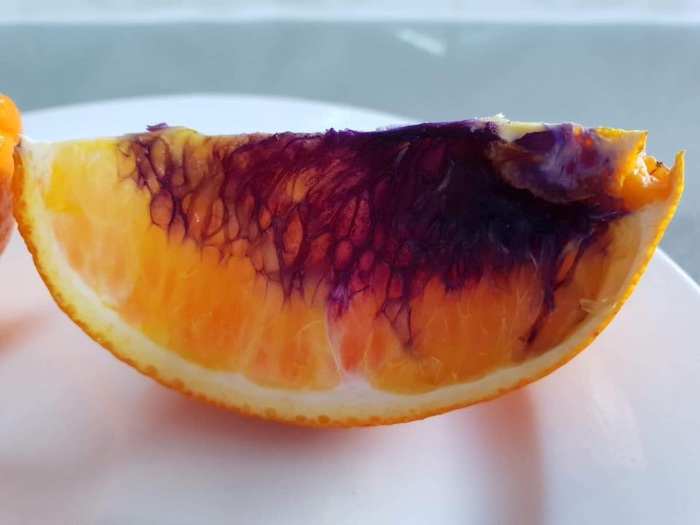 "The gentleman who came to collect it was very, very excited," Moffitt told ABC News.

Queensland Health Forensic and Scientific Services ended up taking the discoloured orange slice samples for scientific examination, along with the knife used to cut the fruit, and the sharpener used to sharpen the knife.

The researchers hope that by investigating everything that came into contact with the now-purple fruit, they might be able to explain the chemical basis for this remarkable transition.

Three years ago, however, the same kind of investigation was not fruitful.

"Testing was carried out to determine the presence of commonly used synthetic food colourings … [but] showed no indication of the presence of any artificial colours," a spokesman for Queensland Environmental Health told Nine News.

While some think the colour transformation could be due to some as-yet-undetected chemical in the homes involved – which might be contaminating the fruit on contact – the truth is, nobody really knows what we're dealing with here.

"I've never seen anything like that, and I've been in the game a long time. An orange would never do that naturally."