It looks like something out of a horror movie, with two dead eyes peering out of a pale patchwork of flesh, but that's a perfectly happy 'ghost shark' - otherwise known as a spookfish - cruising about in the deep sea off the coast of California.

The species, which features retractable sex organs on its forehead, has never been seen on film before.

The individual has been identified by researchers at the Monterey Bay Aquarium Research Institute (MBARI) as Hydrolagus cf. trolli - known commonly as the pointy-nosed blue chimaera.

The "cf." in its species name indicates that its physical characteristics closely match the official species description for Hydrolagus trolli, but without DNA evidence, they can't be sure.

In fact, there's also the possibility that this isn't just the first ever footage of a live Hydrolagus trolli - it could be showing us an entirely new species of ghost shark.

But because these fish are usually too large, fast, and agile to be caught by deep-sea roving vehicles, it's going to be incredibly difficult to find out for sure.

"If and when the researchers can get their hands on one of these fish, they will be able to make detailed measurements of its fins and other body parts and perform DNA analysis on its tissue," Kim Fulton-Bennett from MBARI explains.

"This would allow them to either remove the cf. from their species description, or assign the fish to a new species altogether."

The footage was captured by an autonomous rover in the Gulf of California back in 2009, and researchers have only just released it to the public.

The creature is a chimera - an order of deep-sea fish that split off from sharks in the evolutionary tree nearly 400 million years ago, and has remained isolated ever since.

Chimaeras live on the ocean floor at depths of up to 2,600 metres (8,500 ft), and they have a permanent set of 'tooth plates' to grind their prey into pieces, unlike the conveyer belt of replaceable teeth found in sharks.

But perhaps their most creepy characteristic are the deep grooves cut into their flesh that make them look like something a serial killer stitched together: 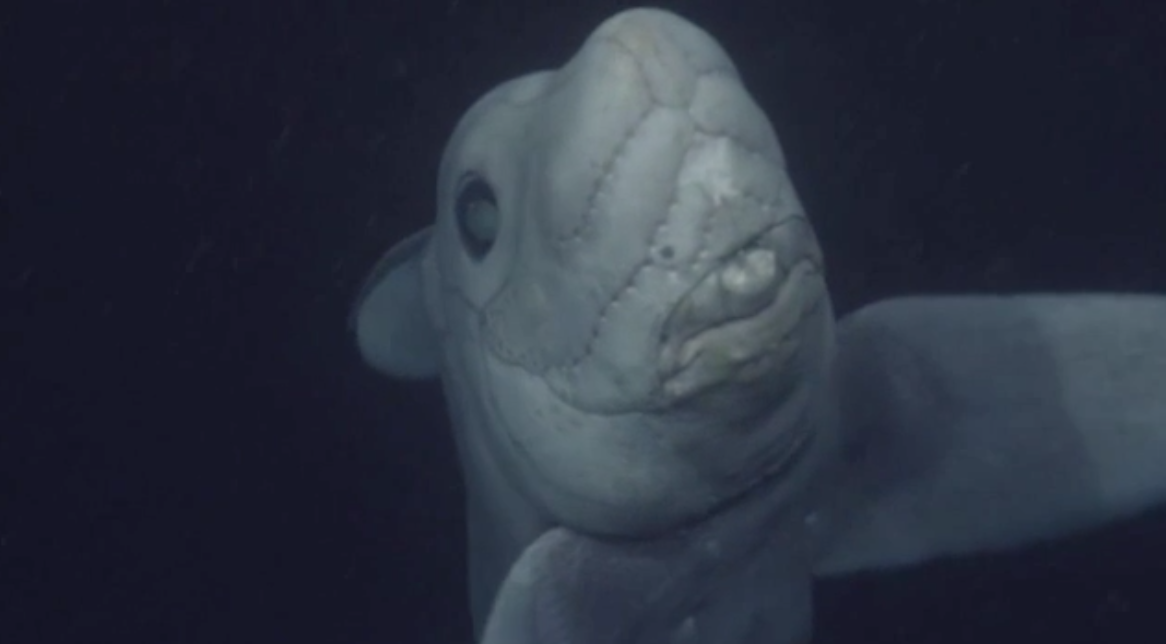 In reality, those grooves are called lateral line canals, and they form a system of open channels on the heads and faces of ghost sharks.

They're thought to contain sensory cells that help these creatures detect movement in the pitch-black water.

You can see another view of them here, including the rows of dots that are also thought to be tiny sensory organs: Until now, the pointy-nosed blue chimaera has only ever been identified in the southwestern Pacific Ocean, particularly around Australia, New Zealand, and New Caledonia, from specimens dredged up in fishing nets.

This new footage now suggests that the species has a much wider range than anyone had expected, and hints that it could range even further away from its known haunts have made researchers hopeful that it's not rare - just good at hiding.

"Similar looking, but as yet unidentified, ghost sharks have also been seen off the coasts of South America and Southern Africa, as well as in the Indian Ocean," Fulton-Bennett reports.

"If these animals turn out to be the same species as the ghost sharks recently identified off California, it will be further evidence that, like many deep-sea animals, the pointy-nosed blue chimaera can really get around."

The sighting has been described in Marine Biodiversity Letters.

You can see more footage of a ghost shark below - this species has a distinctive purple hue, and a serious parasite problem: