World's Whitest Paint Reflects 98.1% of Light. It Could Help in The Climate Fight

A new formula for white paint has given us the whitest white yet. It reflects a jaw-dropping 98.1 percent of all light that hits it, remaining significantly cooler than the ambient temperature, even when sitting in full sunlight.

If used to coat buildings, its inventors say, the paint could help in the fight against global warming by reducing our reliance on electrically powered air conditioning, a habit that's worsening the climate crisis.

"If you were to use this paint to cover a roof area of about 1,000 square feet [92.9 square meters], we estimate that you could get a cooling power of 10 kilowatts," said mechanical engineer Xiulin Ruan of Purdue University.

"That's more powerful than the central air conditioners used by most houses."

The team's work builds on paint they developed last year, which reached a then-record-breaking reflection rate of 95.5 percent. The new formula, the team said, brings it much closer to being a true counterpart to Vantablack, the black pigment that absorbs up to 99.965 percent of visible light.

The image below, in optical light on the left and infrared on the right, shows how much cooler the painted surface is than the surface around it. 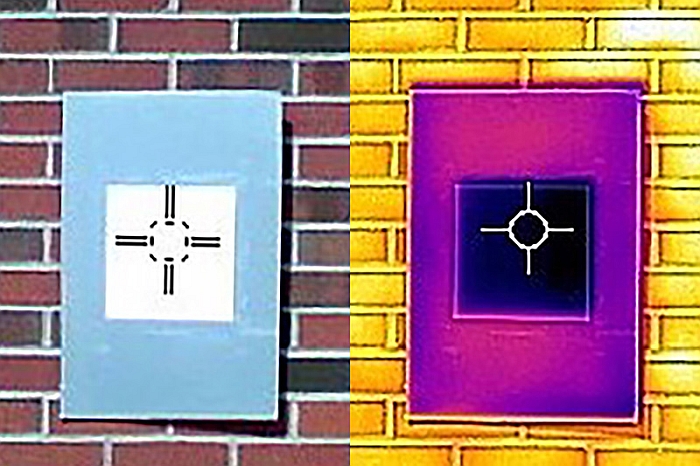 Vantablack has its own applications, but engineers and materials scientists have been chasing an ultra-reflective white paint for a while, for its potential cooling abilities. Reflective cooling paints are already commercially available, like titanium dioxide paint, but they are unable to achieve temperatures cooler than their surroundings.

To develop their new paint, the researchers looked for highly reflective white materials. Their previous paint was made of calcium carbonate particles - the chemical compound found in chalk, limestone and marble - suspended in an acrylic paint medium.

For their new formula, they turned to barium sulfate, occurring naturally as the mineral barite, and commonly used as a pigment in white paint.

The trick is in the size and concentration of the particles. A range of different barium sulfate particle sizes allows the paint to scatter the maximum amount of light, and of course the more barium sulfate there is, the more light it can reflect. There is, however, a point at which too much barium sulfate can compromise the integrity of the paint, making it brittle and flaky when it dries.

The sweet spot, the researchers found, is a concentration of about 60 percent barium sulfate in the acrylic medium. 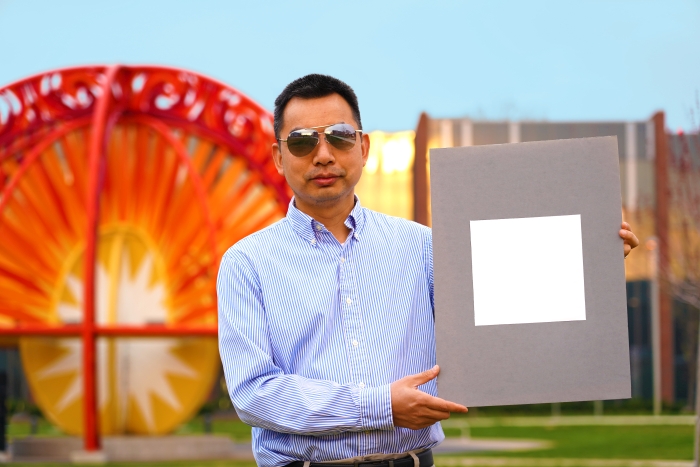 Xiulin Ruan holding up a sample of the paint. (Purdue University/Jared Pike)

During field tests, the team found that their painted surface consistently managed to stay cooler than the ambient temperature by at least 4.5 degrees Celsius, achieving an average cooling power of 117 watts per square meter. It even maintained this in the dead of winter.

For comparison, the team's calcium carbonate paint had a surface temperature of greater than 1.7 degrees Celsius below ambient at midday, and a cooling power of 37 watts per square meter - so the few extra percent reflectivity in the barium sulfate paint made a significant difference.

Because of the limitations of the materials, the barium sulfate paint probably can't get much more reflective, but what the team has achieved could actually change the world for the better.

Air conditioning injects heat into Earth's atmosphere in multiple ways, including pushing hot air out of buildings, the heat of running the machines, and the usually fossil fuel-generated electricity that runs them that contributes to carbon dioxide emissions.

Scientist's have been seeking a method of passive radiative cooling since the 1970s. This barium sulfate paint works, it's reliable, and it can be produced commercially quite easily. The team has filed a patent, and hopes that the paint could soon make its way into common use.

And then? Maybe we should license it for use to all artists except one.

The research has been published in ACS Applied Materials & Interfaces.