An enhanced version of Curiosity's view on Mars. (NASA/JPL-Caltech)

Most humans alive today are never going to go to Mars. It's probably for the best, really.

Without some serious fixes in place, Mars is extremely inhospitable to human survival. But we still dream lofty dreams of planting our feet on alien ground and staring at incredible alien horizons.

Luckily for us, we have the next best thing: robotic rovers, toiling away in the red dust, taking in its vistas with their robotic eyes. This new image, captured by NASA's Curiosity rover and enhanced by the Curiosity mission team here on Earth, really conveys the sense of wonder and wildness one might feel standing on Mars.

"NASA's Curiosity rover captured a remarkable image from its most recent perch on the side of Mars' Mount Sharp," a blog post on NASA's Jet Propulsion Laboratory (JPL) website reads.

"The mission team was so inspired by the beauty of the landscape, they combined two versions of the black-and-white images from different times of the day and added colors to create a rare postcard from the red planet." 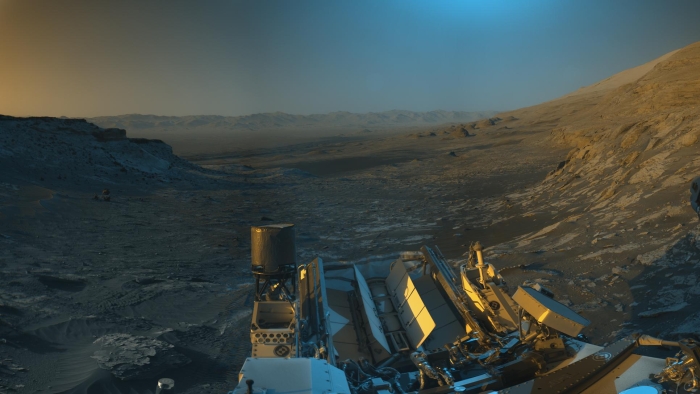 The image was taken on November 16, when the rover completed its most recent drive. At these stopping points, Curiosity always captures a low-resolution 360-degree panorama of its surroundings, on the slopes of Mount Sharp in the Gale Crater.

When the most recent panorama was sent back to Earth, the Curiosity team decided it needed to be captured in the highest resolution possible.

At 8.30pm and 4.10pm Mars-time, Curiosity captured two separate images of the scene as it looked back down the slopes of Mount Sharp. The two mosaics were sent back to Earth, where the Curiosity team combined them, adding color to highlight how the different light conditions at the different times of day highlight landscape features.

The blue color represents the morning light, the orange represents the afternoon, and where both scenes were combined, the team tinted the image green. 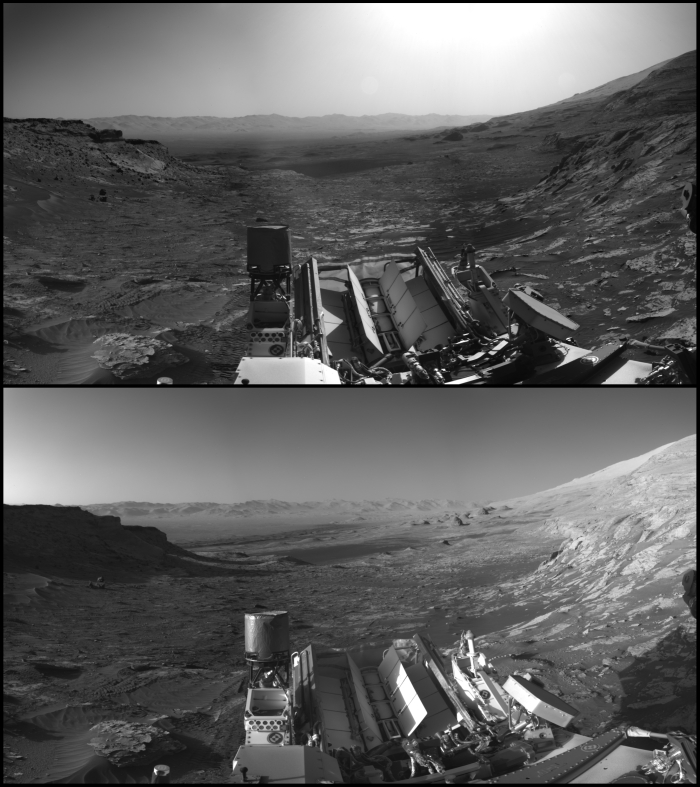 Mars in the morning (top) and again in the afternoon (bottom). (NASA/JPL-Caltech)

A field of rippled sands called the Sands of Forvie, explored by Curiosity in December of last year, can be seen in the middle distance, and intriguing rounded hills to the right of the center were the subject of Curiosity's exploration in August of this year.

To the far right is a formation named Rafael Navarro Mountain, named in honor of one of the Curiosity mission scientists who helped identify organic compounds on Mars. Rafael Navarro sadly passed away earlier this year.

Curiosity is one of two NASA rovers currently operating on Mars, where it has been beavering away for nearly a decade after landing in August 2012.

The rover was tasked with exploring the Gale Crater so that we can gain better knowledge of the climate and geology of Mars, both past and present. It also is looking for any signs that Mars may once have been habitable.

Perseverance, Curiosity's successor, arrived on Mars earlier this year, and is looking even more closely at Mars' habitability. The new arrival has been looking directly for signs of life, including microscopic fossils that may be hiding in the rocks of Mars.

But Curiosity, whose original mission was only planned for two years (since extended indefinitely) is still going strong. The two rovers are exploring different terrains on the red planet, and their complementary observations have and will continue to vastly improve our understanding of a planet so similar to, yet so different from Earth.

You can download the full-size version of Curiosity's postcard from Mars here.