On 1 September, a mammoth 4.4 kilometre (2.7 mile) chunk of rock will pass within an astronomical whisker of our planet – the largest near-Earth object to come this close since NASA set up its Near Earth Observations program in 1998.

Don't bother unlocking the old bomb shelter, though. At 18 times the distance between Earth and the Moon this asteroid poses no threat our own delicate space rock, but it will still be a great opportunity for astronomers to study this orbiting space mountain up close.

We have Schelte "Bobby" Bus at Siding Spring Observatory in Australia to thank for noticing this space boulder back in 1981, and for naming it after the famous 19th century nurse, Florence Nightingale.

In spite of her size, we have nothing to fear from the lovely Florence.

The asteroid isn't expected to come any closer than 7 million kilometres (4.4 million miles). She hasn't been this close since 1890, and we shouldn't expect another brush until 2500. To get a sense of scale, check out the image below. 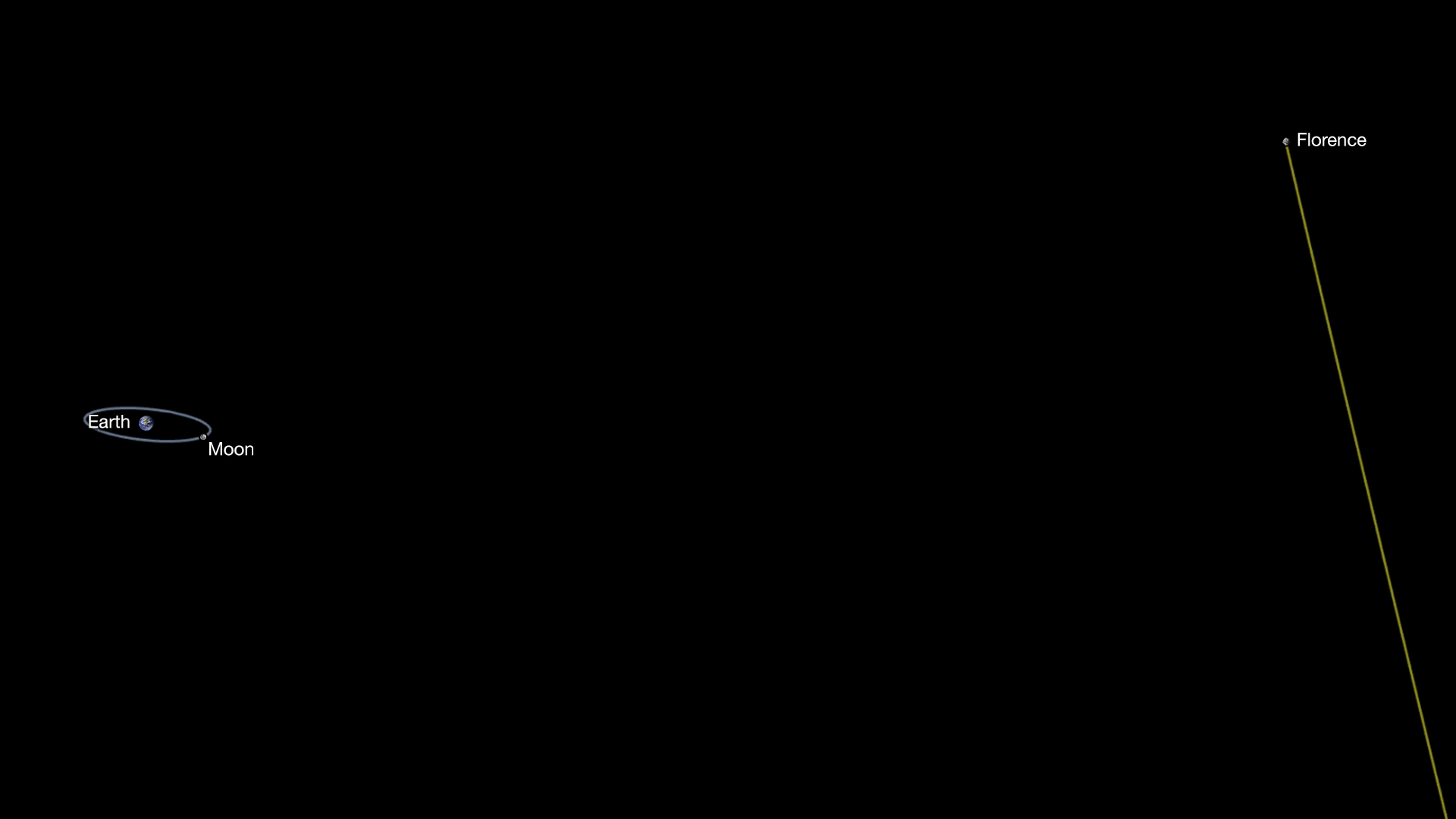 Earlier this year a rock with the less glamorous name 2017 AG13 really did give us a close shave, coming within just half of the distance between Earth and the Moon.

It was a measly 15 to 34 metres (50 and 111 feet) in size, though, putting it into the same ballpark as the 20-odd metre asteroid that caused a stir in 2013 by exploding over Chelyabinsk in Russia.

A similar sized one named 2012 TC4 will come even closer in October, at nearly 50,000 kilometres (about 31,000 miles) overhead of about 13 percent of the distance between here and the Moon.

Much larger than those two and the energy released starts to rival nuclear bombs.

Of all the asteroids to come so far into our neighbourhood, however, Florence is the largest.

"While many known asteroids have passed by closer to Earth than Florence will on September 1, all of those were estimated to be smaller," says Paul Chodas, manager of NASA's Center for Near-Earth Object Studies.

"Florence is the largest asteroid to pass by our planet this close since the NASA program to detect and track near-Earth asteroids began."

If by some stroke of abysmally poor luck the asteroid did slam into our planet, it would almost certainly be a climate changing event capable of wiping out an area the size of a small state.

While it's not viewed as a threat, it will be seen as an opportunity to use radar imaging technology such as the one at Arecibo Observatory in Puerto Rico to study the asteroid's surface, which could reveal details as small as just 10 metres (30 feet) in size.

Knowing more about Florence's shape, size, and composition could reveal more information about her orbital path, or provide important information on its structure that can help us fine-tune future strategies in avoiding catastrophic strikes.

There are currently 1,825 potentially hazardous near-Earth objects being tracked by NASA.

These are chunks of space rock that have a minimum orbit intersection distance of 0.05 astronomical units, or about 7.5 million kilometres (4.6 million miles) and are bigger than 140 metres (about 500 feet) in size, making Florence one of a select crowd.

While we can thank NASA for looking out for new additions to this list and keeping track of their movements, we still don't have the faintest idea what we'd do if an asteroid like this one was on a collision course.

The White House does have a plan of sorts on how to prepare for such events, there is no technology right now that could feasibly prevent an object the size of Florence from making contact with our planet.

Until somebody comes up with a genius idea, we'd best keep our eyes on the sky and learn as much as we can about the rocks that occupy our corner of the Solar System.