Ever Heard of 'Hair Ice'? It's Totally a Thing

Walking through a wintry broadleaf forest in the cold morning light, you might be lucky enough to spot a fleeting enigma called "hair ice".

At first, it might look as though the rotten branch of a tree has grown a shiny white toupee, or perhaps a delicious bunch of cotton candy.

But when you rub the wispy strands between your fingers, you'll find they are cold, ephemeral, and nothing like hair at all.

Found tons of "hair ice" out in Olympic National Forest near Sequim this morning!

"This is some Annihilation shit" pic.twitter.com/4K9VvLnIVM

This is the ice wool of the forest, the frost beard of the trees, and it's such a strange sight, it continues to fascinate humans whenever we're lucky to come across it.

Described for the first time almost one hundred years ago, this unusual icy structure was thought to come from fungus, although it was only in 2015 that scientists finally confirmed the species responsible for it.

Growing under the cover of darkness in the humid winter, usually between the latitudes of 45 and 55 degrees north, the phenomenon can quickly disappear under the equally white snow and the watchful eye of the sun.

While it's commonly called a 'frost', that's not technically correct. Ice crystals are formed at below-freezing temperatures, but they are later 'sculpted' into fine strands of hair by a resident fungus known as Exidiopsis effusa.

Exactly how it manages this is still a mystery, but scientists think it might have to do with a 'recrystallisation inhibitor' provided by the fungus. 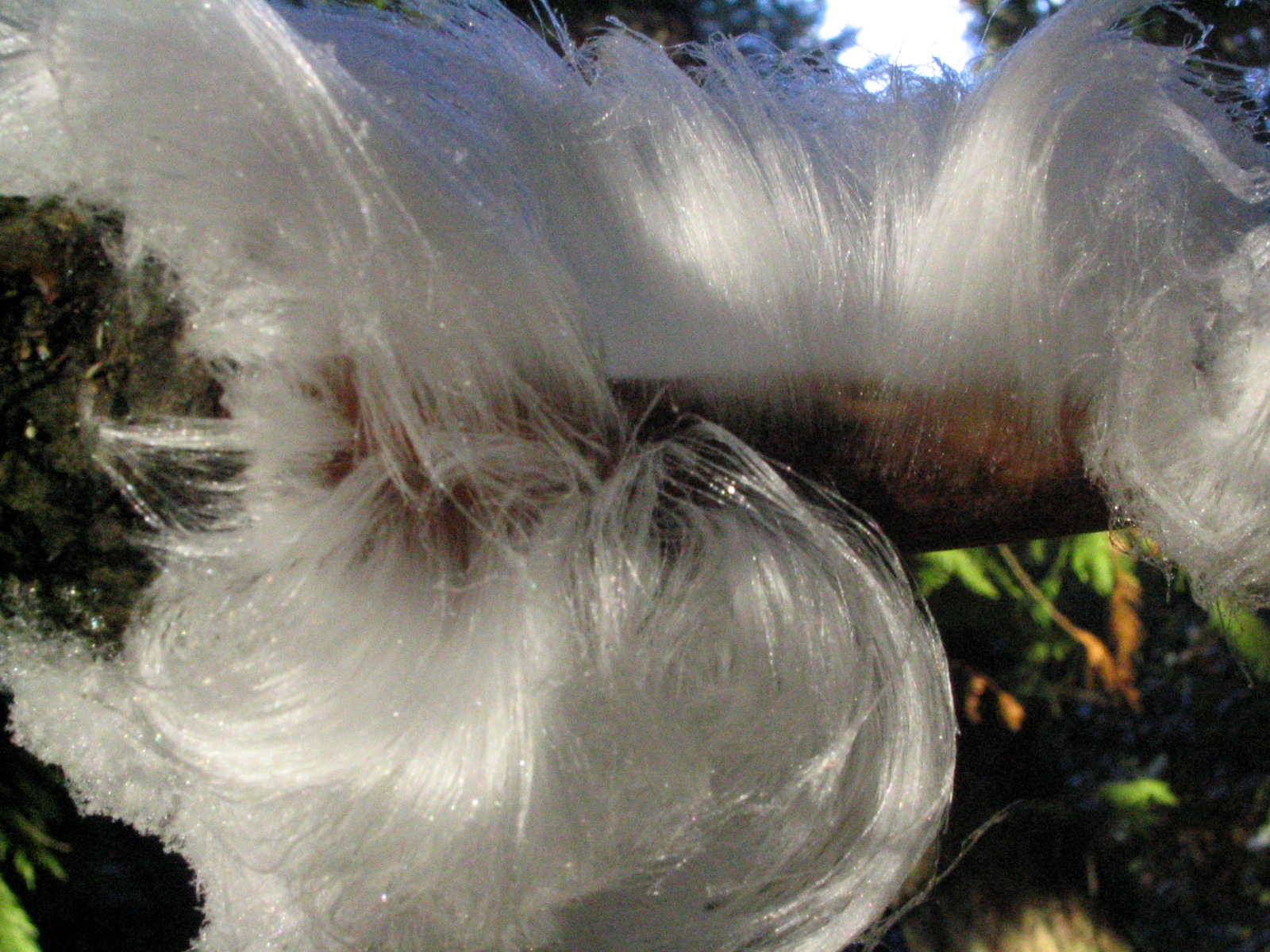 "The same amount of ice is produced on wood with or without fungal activity, but without this activity the ice forms a crust-like structure," explained physicist Christian Mätzler, who co-wrote the paper on the origins of hair ice in 2015.

"The action of the fungus is to enable the ice to form thin hairs - with a diameter of about 0.01 millimetres - and to keep this shape over many hours at temperatures close to 0°C."

Wood can get covered in such ice through a process called 'ice segregation', when water sitting near the surface of the branch collides with cold air, thereby smooshing the liquid into a thin film of ice, which then squeezes through the pores of wood and freezes on top of each other.

As the ice builds up, stacking one crystal on another, it does something strange. Instead of forming into large ice crystals on the surface of the wood, the strands remain separated and ultra thin, as the video below shows.

Growing up to 20 centimetres (nearly 8 inches) in length, these fine silvery fibres are about the same thickness as human hair.

Chemical analyses from 2015 suggest that as E. effusa breaks down the wood, it produces complex molecules like lignin and tannin, which can mix with liquid water and stop the ice strands from bunching up into more stable shapes.

"These components may be the ones preventing the formation of large ice crystals at the wood surface," said chemist Diana Hofmann, who also worked on the 2015 paper.

More research will be needed before this hunch can be confirmed, and there are plenty of other questions left unanswered. For instance, whereabouts in the world does hair ice form? Why does it only grow on certain trees and plant species? And are there any other strange ice forms that haven't yet been discovered?

"People have seen hair ice and similar forms of ice in nature for centuries," ice specialist James Carter, who was not involved in the study, told Earth Magazine back in 2015.

"Now that we have the Internet and digital cameras, people are able to share their findings, and we are able to see many examples of these forms of ice."