An amazing hydrogen-powered round-the-world ocean voyage has just gotten underway, with the US$5.25-million Energy Observer setting sail from Paris on the weekend.

The French vessel, which is set to make 101 stopovers in 50 countries across the globe during its epic 6-year undertaking, runs on wind and solar power, plus hydrogen generated from seawater through electrolysis.

The trip, which will self-sufficiently circumnavigate the globe with zero greenhouse gas emissions, has been described as the 'Solar Impulse of the Seas', in reference to the pioneering solar-powered aircraft that flew around the world in 2016.

The Energy Observer runs on solar power harnessed from extensive panelling covering 130 square metres (1,400 square feet) on the top of the vessel, in addition to two large wind turbines at the rear of the 30.5-metre (100-foot) long catamaran.

When it's night time or when there's no wind to spin the turbines, the vessel relies on its chief innovation: an electrolysis system that extracts hydrogen from sea water and stores it in an onboard tank. 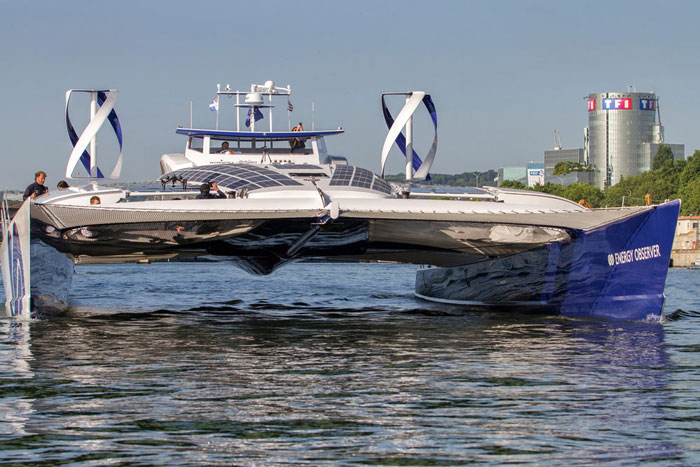 "When we are over-producing energy, when we have a lot of wind and sun, the idea was not to waste this energy and to just keep it on board," expedition leader Jérôme Delafosse explained to Wired earlier in the year.

"Hydrogen is the best way to do this because it's very light and the efficiency of hydrogen is three times more than just fuel."

In addition, the catamaran is also equipped with a kite sail that can tug the vessel along and serve as another means of generating power.

"When the kite sail is operational, the forward motion of the boat will make the propeller rotate," Didier Bouix, who helped design the boat's power systems, told Discover. 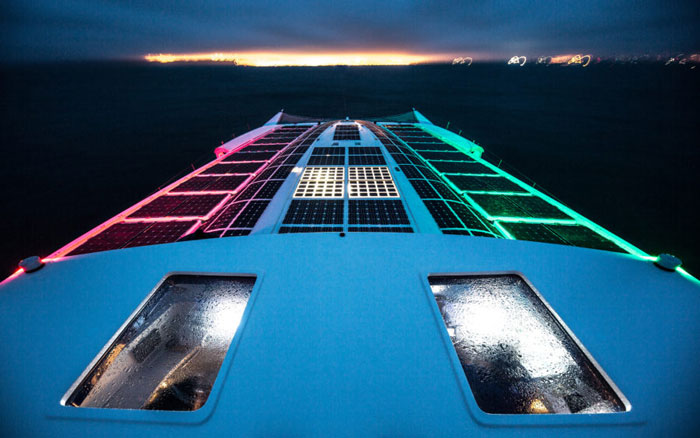 While it all sounds very high tech, the Energy Observer's energy equipment mask the fact this is actually a 34-year-old former racing vessel built in 1983, which has undergone extensive modifications to now serve as a model for emissions-free transport.

That new mission is also why the vessel is expected to take some six years to complete its worldwide tour.

Unlike previous renewable-powered sea voyages around the world, the Energy Observer's crew is taking their time on this journey, hoping that each stopover in ports throughout 50 countries along the way will help demonstrate that there's a viable alternative to using environment-destroying fossil fuels to take people places.

It may have been built as a racing vessel, but those days are done – as some things are best done slowly.

"Energy Observer, just like Solar Impulse, makes exploration work for a better quality of life," President of the Solar Impulse Foundation, Bertrand Piccard, said at the ship's inauguration earlier in the month.

"We need to lead people towards the future by showing them solutions instead of depressing them."

But while the boat looks amazing and the cause is just, the biggest question looming over the trip is money – it's estimated the Energy Observer will require around US$4.6 million annually to complete its journey.

Let's hope the crew is able to secure enough sponsors to keep the six-year voyage afloat, because this is one message that still really needs to be heard.