It's one of those times when nature simply takes your breath away: a lonely landscape perfectly framed under a semi-circular aura, only unlike most rainbows, this time there's almost no colour.

The phenomenon is known as a fog bow, and just like a regular rainbow, it occurs when sunlight shines through water droplets. But because fog droplets are smaller than rain droplets, a lot of the colour is lost.

The fog bow pictured above was snapped in the Red Rock Lakes National Wildlife Refuge by James Perdue of the US Fish & Wildlife Service. To see one for yourself, you need to be standing with the Sun behind you, looking into a bank of fog.

"The Sun's light is still refracted by the water particles, but to a much lesser extent due to the water droplets being so small," explains STV weather presenter Sean Batty.

"There will be some colours within a fog bow, although they will be so weak that our eyes don't pick it up." 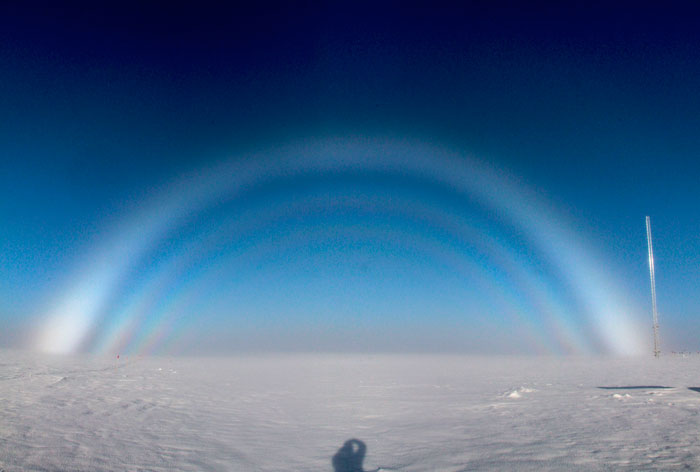 As NASA explains, the shape of a fog bow is formed by the droplets that are at the right angle to divert sunlight back into your eyes.

Whereas water droplets act like small prisms, producing all the colours of the rainbow, the fog droplets – which can be hundreds of times smaller – process light in a different way.

The main difference is the diffraction the fog causes, where the light is scattered more than it's reflected, leaving only the brightest parts of the pattern: the white fog bow.

The same process also makes fog bows much wider in shape than rainbows, though they're usually not quite as big overall.

For the perfect fog bow, you need a fog bank that's relatively diffused and thin, as this allows the light to pass through the droplets in the first place.

One of the most dramatic fog bows we've seen was shot on Rannoch Moor in Scotland by photographer Melvin Nicholson this week.

Like fog bows, there are some other lesser-known water-and-light phenomena to look out for as well.

A glory is created by sunlight and droplets in mist or clouds, where the saturation of the colours is somewhere between a rainbow and a fog bow.

If you're up in the skies, also look out for a cloudbow, created in just the same way as a fog bow, but viewed from above.

Then there's the moonbow, a rainbow illuminated by the Moon rather than the Sun. The water droplets are the same size as in a rainbow, but the light source isn't as bright, which is why moonbows are much fainter and often appear white, just like the fog bow.

And just this week a rare circular rainbow was also caught on camera in the UK, with the right conditions making for a stunning bow fully extending through 360 degrees.

All of these bows can take the breath away, and if you're lucky enough to see them, at the time you'll probably be more struck by the surreal nature of the moment than the actual science behind it:

"It's an amazing thing to witness," Nicholson told the BBC about the fog bow he captured. "It was just beyond magical and one of those days that you'll remember for a long time to come."