Astronomers have released a stunning new image of a gigantic beam of radiation shooting out into space from a supermassive black hole, with the particle jet measuring three times longer than the diameter of the Milky Way.

The composite image – seen above, and below with annotations – depicts a galaxy called Pictor A, located nearly 500 million light-years away from Earth. The researchers say that the black hole at the centre of Pictor A releases a huge amount of gravitational energy, as material swirls toward its event horizon. This energy produces a jet of particles that streams over a distance of 300,000 light-years.

The scientists composed the image by taking X-ray data (the blue elements in the picture) collected using NASA's Chandra X-ray Observatory and combining it with radio data (seen in red) from Australia's Telescope Compact Array.

They say new data from Chandra indicates there are actually two beams being emitted from the black hole, although one of them, called the counterjet, is harder to make out. This counterjet, which extends to the left of the picture, is comparatively difficult to see due to its motion away from the line of sight to Earth.

The red swirls, called radio lobes, indicate clouds of surrounding gas through which the jet and counterjet extend. On the far right of the image, you can see a bright blue 'hotspot', which the researchers say is caused by shock waves, much like a sonic boom from a supersonic aircraft. 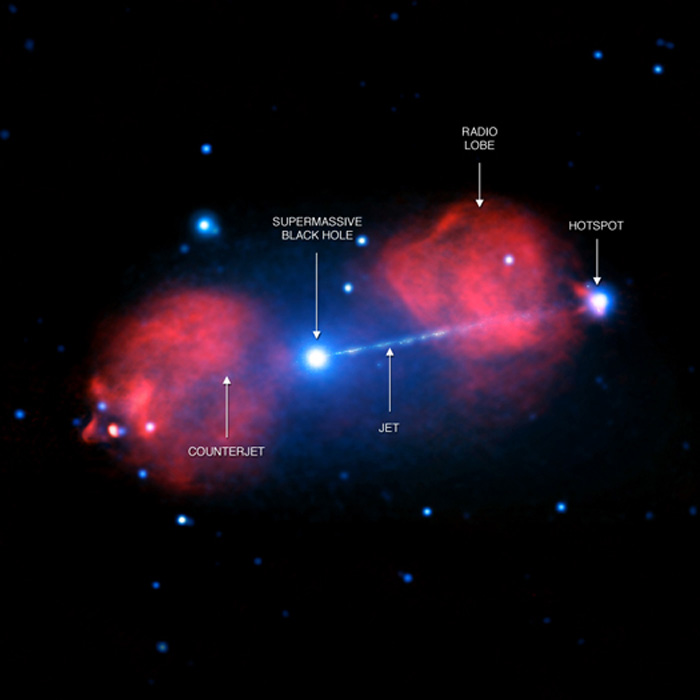 According to the scientists, the emission of X-ray particles most likely results from electrons spiralling around magnetic field lines in a process called synchrotron emission. It's not fully understood how it's occurring here, but the researchers think the electrons must be continuously re-accelerated as they move out along the jet.

In any case, the awesome spectacle has prompted some fantastic comparisons. "The Star Wars franchise has featured the fictitious 'Death Star', which can shoot powerful beams of radiation across space," per a description on the Chandra web site. "The Universe, however, produces phenomena that often surpass what science fiction can conjure."

The research is described in a paper available online and will be published in the Monthly Notices of the Royal Astronomical Society.