The behemoth is an active galactic nucleus (AGN) at the heart of the Seyfert 2 galaxy GSN 069. The AGN is about 250 million light years from Earth, and contains about 400,000 times the mass of the Sun.

The team of astronomers used the ESA's XMM-Newton and NASA's Chandra X-ray Observatory to observe the x-ray emissions of the SMBH. About every 9 hours, the black hole flares brightly with x-rays as material is drawn into it.

Astronomers have found two other stellar mass black holes that flare regularly as they feed, but this kind of regularity in a supermassive black hole has never been seen before.

The paper outlining this discovery is published in Nature and is titled "Nine-hour X-ray quasi-periodic eruptions from a low-mass black hole galactic nucleus."

Lead author is Giovanni Miniutti from the ESA's Center for Astrobiology in Spain.

"This black hole is on a meal plan like we've never seen before," said Miniutti in a press release.

"This behavior is so unprecedented that we had to coin a new expression to describe it: "X-ray Quasi-Periodic Eruptions"."

X-ray emissions from this SMBH have been known and observed since July 2010, but they were steady. The new paper is based on 54 days of observations beginning in December 2018, beginning with the ESA's XMM-Newton Observatory.

During the current regular eruptions, the X-ray flaring activity increases by two orders of magnitude over the background X-ray emissions. Each flare lasts just over one hour and occurs every nine hours. 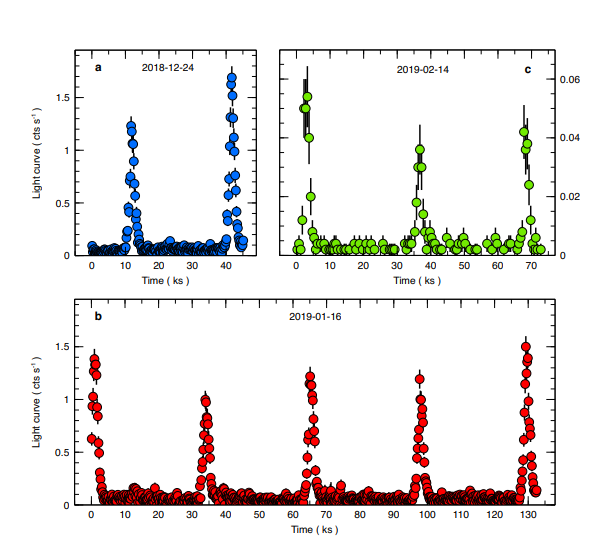 "By combining data from these two X-ray observatories, we have tracked these periodic outbursts for at least 54 days" said co-author Richard Saxton of the European Space Astronomy Centre in Madrid, Spain.

"This gives us a unique opportunity to witness the flow of matter into a supermassive black hole repeatedly speeding up and slowing down."

The cause of these regular flares is unknown. The hot 2.5 million degree F. gas surrounding GSN 069 is the same temperature as gas surrounding other SMBHs. It's a mystery because it's simply too hot to be from the in-falling disc of material that surrounds black holes. But GSN 069 is a unique opportunity to study the phenomenon because the hot gas repeatedly forms then disappears.

Normally, this hot gas is caused by a star being torn apart and consumed by a black hole, or so astronomers think. But the regularity exhibited by GSN 069 is a mystery.

"We think the origin of the X-ray emission is a star that the black hole has partially or completely torn apart and is slowly consuming bit by bit," said co-author Margherita Giustini, also of ESA's Center for Astrobiology.

"But as for the repeating bursts, this is a completely different story whose origin needs to be studied with further data and new theoretical models."

Again, seeing a supermassive black hole consume gas from a star is nothing new. It's the regularity of GSN 069's flaring that is the head-scratcher. The authors of the study suggest two possible explanations for the the SMBH's regular feeding schedule:

Thanks to the Chandra observations, the team of scientists knows that the source of the flaring X-rays is right in the heart of GSN 069. That's where a SMBH is expected to be.

The combined data from Chandra and XMM-Newton also clearly show that the flaring, though regular, is slowly changing: both the size and the duration of the black hole's 'meals' have decreased slightly, and the space between each meal is growing. It's up to future observations to see if these trends continue.

GSN 069 is on the small side for an SMBH. Usually, an SMBH contains as much mass as several million or even several billion Suns, while GSN 069 contains only about 400,000 Suns worth of mass. That could help explain why this type of regular feeding hasn't been seen before.

For larger SMBHs, much larger than this one, their brightness fluctuations are a lot slower. Rather than erupting every nine hours, it should take them months or even years to flare like this. That would explain why quasi-periodic eruptions (QPEs) like these haven't been observed. X-Ray observatories are busy, and there's no way to train one on a single target for that long.

There've been several cases where large increases or decreases in X-rays produced by black holes have been observed. Those observations relied on repeated observations over months, or even years.

Some of those changes are too fast to be explained by the standard theory of in-falling matter from a black hole's accretion disk. But this discovery could explain those observations. They may be experiencing similar behavior as GSN 069.