If smartwatches and fitness trackers are the best we can do when it comes to wearables, stop the planet, I want off. Jupiter looks better anyway. But wait, I can turn my skin into an actual LED display? Okay fine, I'll stay, because that sounds awesome.

Developed by researchers in Tokyo, Japan, these super-flexible electronic displays are the thinnest ever, at an incredible 3 micrometres thick. How thin is that, exactly? Oh about 0.003 mm - more than 13 times thinner than a human hair.

Not only are these the thinnest ever electronic displays embedded with minuscule LED lights that you can adhere to your skin, they've also overcome a bunch of really important challenges that made the rest of them less-than-viable for the actual market.

First off, these displays produce less heat than previous efforts - which is important when you're applying them directly to your bare skin - and also use up less power, which means they can be used for longer stretches of time.

This 'electronic skin' is also way more durable than other versions for another reason, as Adi Robertson reports for The Verge: "One of the major problems with these kinds of light films in the past … is the fact that they only lasted for a matter of hours when exposed to normal air."

The solution? Researchers from the University of Tokyo figured out that they could insert a special protective layer, called a passivation layer, into the display film, and not only does this hold everything together and prevent it from breaking or stretching too thin when you flex your skin, it also protects the components from the elements.

"The coating kept out oxygen and water vapour well enough to keep a light working for 'several days'," says Robertson.

As the team reports in Science Advances, when an 'e-skin' with red and green lights and a sensor that can measure oxygen levels through the skin was laminated to a figure, it stayed illuminated and delivered measurements for four whole days.

The lights used in the displays are called organic polymer light-emitting diodes (PLEDs), which are small sheets of energy-efficient lights that turn off and on when exposed to an electrical pulse. 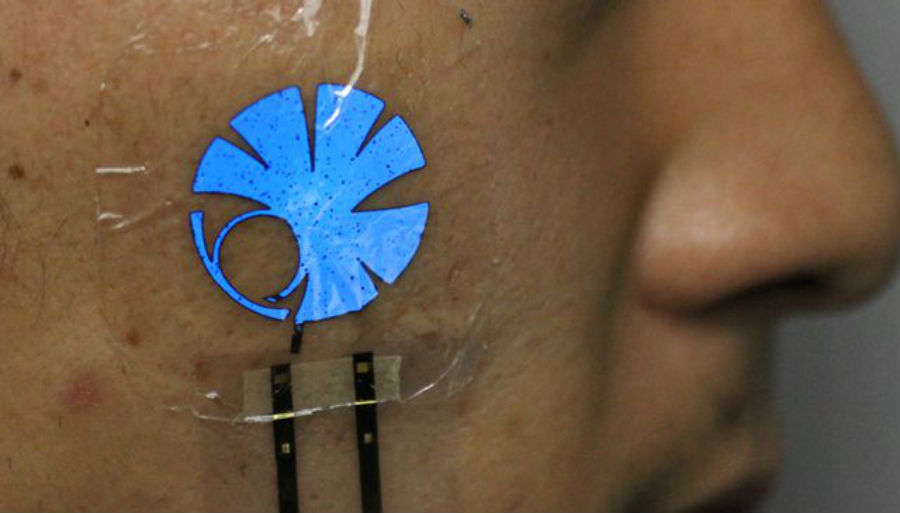 So other than the possibility of us running around in the future with obnoxious light-up tattoos - or maybe we'll all just end up writing 8008135 on the wearable calculators we've stuck to the back of our hands as a very funny joke - how could this technology actually change our lives?

The most obvious use would be to replace fitness trackers and medical sensors to measure a person's pulse, blood oxygen levels, and daily steps. Or they could literally turn our bodies into notice boards, which would be more useful than it sounds.

"A worker will be able to have building plans or an electrical diagram displayed on their skin without carrying heavy devices," one of the team, Takao Someya, told New Scientist.

Watch the video below to catch a glimpse into the future: