World's Deepest Squid Discovered at Staggering Depth Under The Sea

A team of researchers hunting for the wreck of a lost WWII destroyer ship in the Philippine Sea returned to land with another, perhaps even more exciting discovery: video evidence of the deepest-swimming squid ever recorded.

Cruising just above the floor of the Philippine Trench at a staggering 20,300 feet (6,200 meters) below the surface, the young bigfin squid (family Magnapinnidae) became an instant record holder – blowing the previous champ, another bigfin squid swimming about 15,400 feet (4,700 m) below the Pacific Ocean, out of the water. 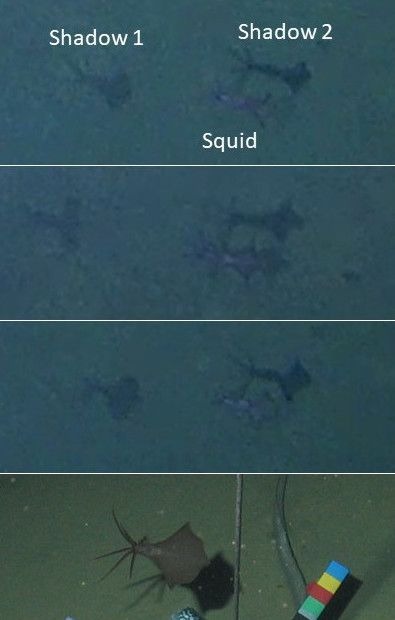 Above: Three shots of the Philippine Trench bigfin squid next to a shot of a bigfin taken in 2014.

The researchers also recorded four cirrate octopuses – better known as dumbo octopuses for their fins that resemble elephant ears – around the same depth, the team wrote in a recent study.

According to study co-author Michael Vecchione, this is just the second time that dumbos have been observed so deep, proving that previous observations of the floppy-finned cephalopods in the Java Trench were not just a fluke.

"This dive showed that multiple types of cephalopods can live in at least the upper parts of these really deep ocean trenches," Vecchione, a zoologist with the National Oceanic and Atmospheric Administration (NOAA) who is Curator of Cephalopods at the Smithsonian Institution in Washington D.C., told Live Science in an email.

The sightings also raise some questions, Vecchione added – like, "How do bigfin squids manage to live physiologically at depths ranging from 3,200 to 19,600 feet (1000 to 6000 m)," where atmospheric pressures can be up to 600 times greater than at the ocean's surface. 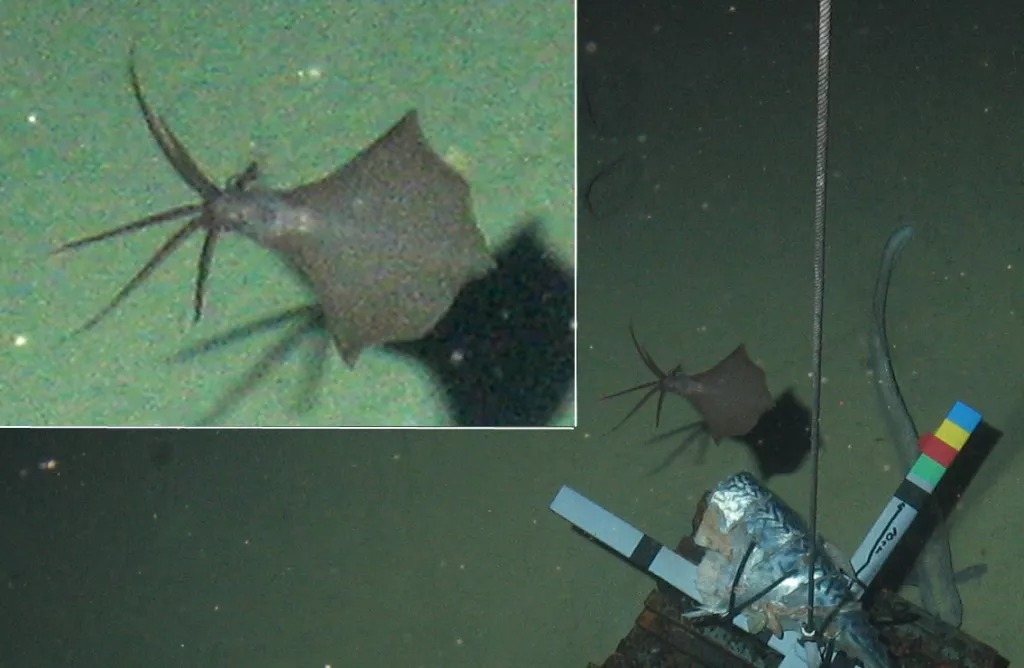 Above: A bigfin squid that study co-author Alan Jamieson observed more than 16,000 feet underwater in 2014. Jamieson and his colleagues found the same species swimming thousands of feet deeper in 2021.

Researchers detected the bigfin in March 2021, while hunting for the wreck site of the USS Johnston – a US Navy destroyer that sank in 1944 during the Battle of Leyte Gulf.

The team spotted the bigfin squid just above the ocean floor. Although the sub was hovering too high to image the squid in precise detail, the researchers were able to discern telltale features – such as the squid's extremely large back fins and its distinct swimming posture – that confirmed its identity.

Because the squid's tentacles were relatively short, the researchers hypothesized that the deep-dwelling cephalopod was a juvenile.

The team published their findings Dec. 2, 2021 in the journal Marine Biology.