Heroic Scandinavian women standing shoulder to shoulder with ranks of masculine warriors in Viking combat are the stuff of legends, but debate has raged over the years on whether it's also the stuff of reality.

A new discovery has confirmed that in at least one specific case, remains found buried in a warrior's grave were genetically female, supporting the view that the mythical 'shield-maiden' female fighters might have its roots in actual historical events.

Researchers from Uppsala University and Stockholm University conducted genetic and isotope analyses on bones taken from a 10th century grave near the Swedish Viking town of Birka, just outside of Stockholm.

The grave, coded Bj 581, consisted of no ordinary burial.

Excavated and mapped well over a century ago, it was found to contain an axe, sword, spear, armour-piercing arrows, a battle knife, a pair of shields, pieces for a table-top war game, and the bones of a mare and a stallion. 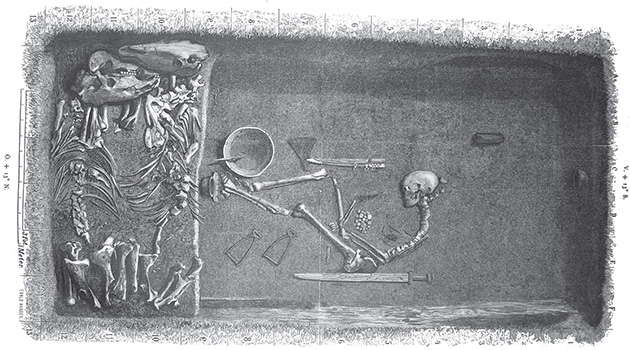 Illustration by Evald Hansen based on the original plan by excavator Hjalmar Stolpe (1889).

Based on these goods, and the fact most such high ranking warriors of the period were considered to be men, the skeleton was readily assumed to belong to a male.

But the bones didn't seem all that masculine, and a full osteological inspection of Bj 581's skeleton suggested the esteemed official was in fact a woman of at least 30 years in age.

The size and shapes of bones can provide a strong suggestion on the specific sex of a set of remains, but variation within sexes and between populations means it's not without its problems.

DNA can provide a more solid grounding for a conclusion, when it can be successfully extracted.

In this case, the researchers amplified DNA taken from one of the Birka warrior's teeth and arm bones and determined there was sufficient genetic data to conclude it was of only X chromosome origin, without any sign of DNA from a Y chromosome.

"This is the first formal and genetic confirmation of a female Viking warrior," says researcher Mattias Jakobsson from Uppsala University.

An evaluation of the isotopes in her bones showed she was well travelled, adding further evidence to her being a respected leader among her people.

"The gaming set indicates that she was an officer, someone who worked with tactics and strategy and could lead troops in battle," says lead researcher Charlotte Hedenstierna-Jonson from Stockholm University.

One of the more well known, The Saga of Hervör and Heidrek from the 13th century, features a heroic female fighter who took on her father's quest to find a mythical sword named Tyrfing.

Such powerful tales have resonated through the ages, influencing numerous writers and poets, the most renowned of which being Lord of the Rings author, JRR Tolkien.

Separating myth from historical accounts has required a lot of detective work, however. And even with this discovery, it's important not to get too worked up in the romance.

"What we have studied was not a Valkyrie from the sagas but a real life military leader, that happens to have been a woman," says Hedenstierna-Jonson, referring to mythical warrior spirits who oversee battles in ancient stories.

A study published in 2011 based on osteology (the physiological study of bones) claimed women made up as much as half of the remains among Norse migrants, a report that sparked an enthusiastic, if somewhat overhyped interpretation that envisioned this Viking diaspora as armed raiders.

Still, while one discovery can't tell us how common female combatants are, having DNA evidence confirming at least one instance of a prominent warrior-class woman is a sign that the stories weren't all fantasy.

This research was published in the American Journal of Physical Anthropology.