Badass Dinosaur With a 'Mohawk' of Spikes Uncovered in Patagonia

When dinosaurs roamed the Earth in ancient Patagonia, one particular type of dinosaur might have stuck out amongst the rest.

Living 140 million years ago in the early Lower Cretaceous, the newly discovered herbivore Bajadasaurus pronuspinax had a thing for growing spikes.

It was part of the Sauropod family, but looked a little like a small Brontosaurus crossed with a porcupine.

"The sauropods are the big dinosaurs with long necks and long tails, but specifically this is a small family within the sauropods which were about 9 or 10 metres in length," palaeontologist Pablo Gallina from the National Scientific and Technical Research Council in Argentina told Agencia EFE.

Bajadasaurus was a species of this small family, called Dicraeosauridae, all of which have similar spines on their necks.

When the researchers discovered the fossils of this previously unknown dinosaur in Patagonia, Argentina, the remains included not only most of the skull, but a whole spine bone.

This gave the researchers the chance to investigate what these spines might have been used for. "We believe that the long and sharp spines - very long and thin - on the neck and back of Bajadasaurus and Amargasaurus cazaui (another dicraeosaurid) must have been to deter possible predators," explained Gallina to AFP.

"We think that had they been just bare bone structures or covered only by skin, they could have been easily broken or fractured with a blow or when being attacked by other animals."

Instead, he adds, they probably were covered by a keratin sheath, in a similar way to horns of mammals such as antelope.

The skeleton was found in the Bajada Colorada Formation in the Neuquén Basin, Argentina back in late 2013, and after years of painstaking study and comparisons it has finally been recognised in the literature and given a name, Bajadasaurus pronuspinax. Bajada is Spanish for downhill, which the researchers explain is in reference to where it was found. 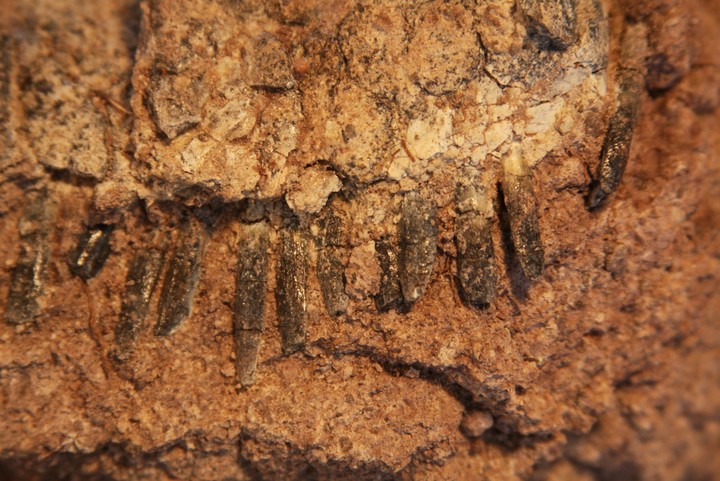 Remains of the jaw and teeth. (CONICET)

When we're investigating creatures that lived hundreds of millions of years ago, we can never fully confirm the reason for some of their stranger features, such as the long spines of B. pronuspinax.

According to Gallina, finding the function of the spines is difficult. Researchers have hypothesised this odd back feature could be a 'sail' to regulate body temperature, or a fleshy hump to store fat – similar to a camel.

For the spines to support such structures however, they would need to be sturdy enough to not break under the weight. According to the researchers, it's also possible they didn't support flesh of any sort, but were instead a defensive feature.

"It wouldn't be an active defence, but rather a passive defence - that is, a kind of warning defence. These are structures that give a warning to carnivores that may approach," Gallina said to Agencia EFE.

"A carnivore comes up, sees a gigantic spiny structure and thinks twice."