If there's any indication that the underbelly of Egypt is still teeming with priceless cultural relics, it's the fact that a number of said relics have ended up in the country's sewage system. Police have found several ancient sarcophagi floating down a sewage canal in Egypt, likely ditched by people digging illegally in the area. 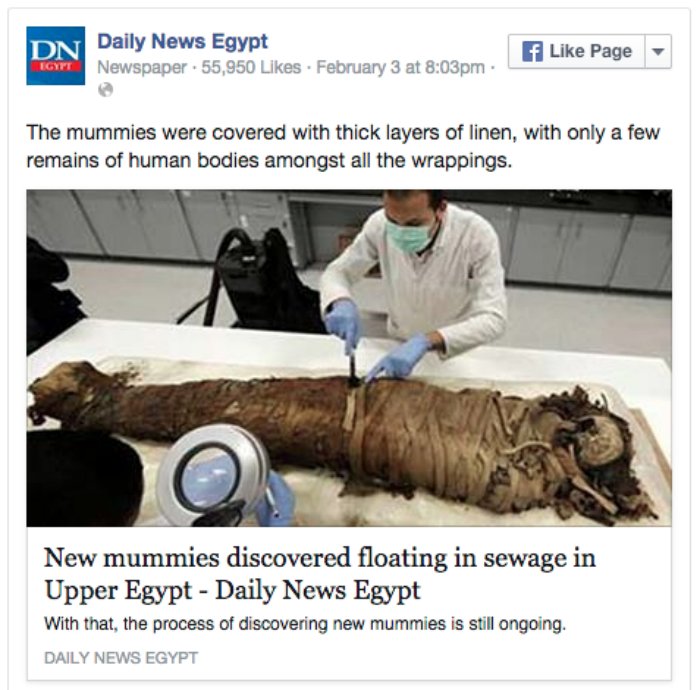 The mummies were originally housed in tombs located in a small village near the city of Minya, about 245 km south of Cairo on the western bank of the Nile River. They're now with the national Ministry of Antiquities, and based on the way the mummies were wrapped up, they've been dated to the Greco-Roman era, which ended around 1,600 years ago. While they were covered in many thick layers of linen, few bodily parts remain inside.

"The sarcophagi the police found the mummies in were … floating in sewage, and their conditions were so bad that they had disintegrated, according to the report of the ministry," Nada Deyaa' reports for Daily News Egypt. "They had drawings of women with several colours clearly outlining and showing their faces on their top covers."

Ministry officials suspect that the mummies ended up in the sewer because people digging illegally in the area accidentally uncovered the tombs. Due to the severe government restrictions on digging activity, they panicked, and ditched the evidence in the sewage canals, "despite realising their cultural value", says Deyaa'.

"The robbers may have resorted to dumping these sarcophagi in the irrigation canal when they felt that authorities were closing in on them, or perhaps when they were approaching a security checkpoint," Head of the Antiquities Sector at the ministry, Youssef Khalifa, said in a public statement.

Despite restoration efforts not faring so great, Youssef Khalifa said the mummies and their sarcophagi will be placed in Minya's Hermopolis Museum for public viewing.