Many Europeans have been assessing the damage from the recent wintery weather dramatically nicknamed the "Beast from the East". But people visiting certain parts of the English coast found a particularly unwelcome surprise.

Thousands of dead starfish and other sea creatures were washed up along the shores in Kent and East Yorkshire, creating surreal scenes reminiscent of post-apocalyptic horror movies.

So how did a blizzard cause such marine destruction? 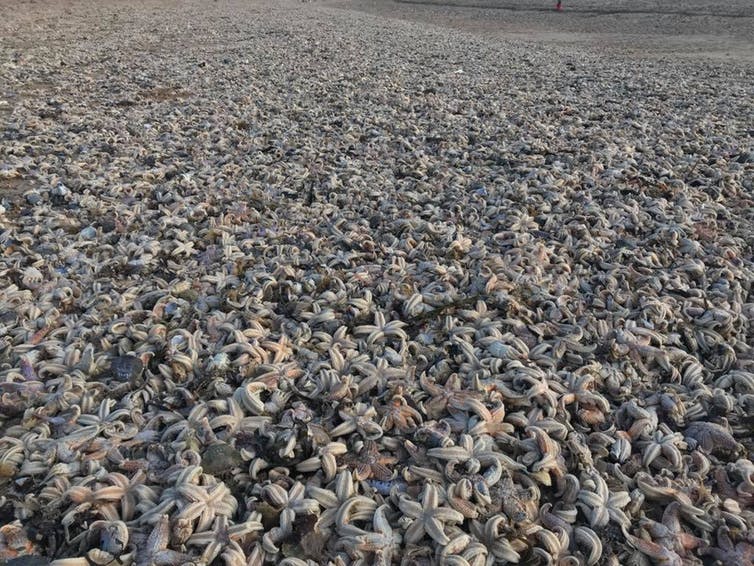 Thousands of starfish were washed up on Kent beaches. (Lara Maiklem/London Mudlark)

Mass starfish strandings aren't completely unheard of. For example, several million were found on the coast of Worcester County, Maryland, US in 1960.

These events are not exclusive to just starfish but have also included other marine animals that live on the seabed including crabs and molluscs.

There has even been a poem written about these events written by Michael Symmons Roberts.

We don't yet know the exact reasons for mass strandings but they are often blamed on very cold weather or storms.

The Beast from the East was a polar vortex that brought freezing temperatures and high onshore wind gusts onto the eastern coastline of the UK.

High winds can disturb the seas along the coast, creating large waves that churn up the seabed where many animals reside. Sediments on the seabed are disturbed and can smother these animals.

Animals picked up by these disturbances can be moved high up the shore during the high tides and are left stranded as the tide retreats.

Coincidentally, during the peak of the storm, UK shores also experienced low spring tides, which likely made the marine effects of these high winds worse. 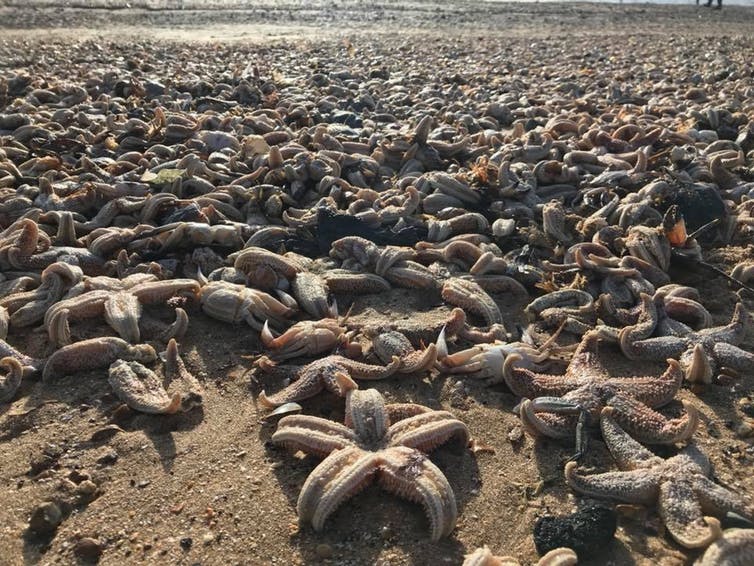 As if this wasn't enough, the Beast from the East brought very cold temperatures several degrees below freezing over several days across some parts of the country. Such low temperatures can have dramatic effects on marine life.

Previous mass strandings have been blamed on cold temperatures making marine life severely lethargic. Once stranded, any surviving animals would have been exposed to potentially lethal low temperatures.

Starfish may be at particular risk of strandings after storms because of a behaviour known as "starballing".

By curling each of their multiple arms to create a large spherical balloon shape with their body, they can essentially roll over the seabed in fast-moving water and cover much greater distances.

But during a storm they could be rolled out of control and left stranded on the beach. It seems most likely that the mass strandings that occurred after the Beast from the East were driven by high wind speeds combined with low spring tides and extreme cold temperatures (for the UK).

Luckily, the event is unlikely to have a long-term impact on UK starfish populations.

Starfish are abundant and widespread within the shallow waters of the UK and Atlantic Ocean.

They are particularly resilient creatures that live in highly dynamic habitats, can regenerate limbs and are highly effective predators.

What's more worrying is that these kind of extreme weather events may become more common thanks to climate change.