It's been more than a decade since the Cassini mission gave us our first close-up look at Saturn's largest satellite, Titan. Astronomers have spent years sifting through the pool of data to reveal a world that's both strangely alien and remarkably Earth-like.

Now, for the first time, we have a topological map of the moon's surface. And researchers have wasted no time in trying to make sense of this odd little ball of rock. 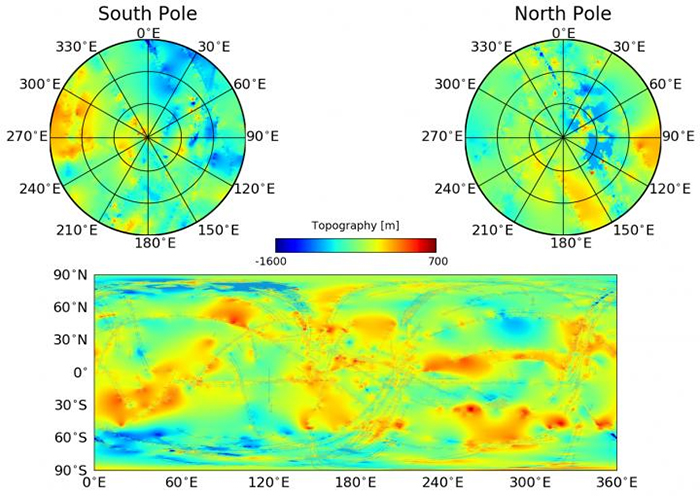 Ever since the plucky spacecraft Cassini (may it rest in peace) and its companion moon lander, Huygens, set eyes on Titan's surface, we've felt a kindred attachment to the moon.

Like Earth, it has seas of liquid pooling in depressions on its surface, putting it into a very exclusive club in our Solar System.

Sure, those seas are made of super cold hydrocarbon compounds, rather than water. And happen to be eerily flat. But an ocean is an ocean.

Now it turns out the oceans on Earth and Titan have another thing in common.

Astronomers from Cornell University in the US have used a recent topographical construction of Titan's surface to find the moon's three biggest puddles have a common equipotential surface – a sea level, just like our own oceans.

That in itself is pretty cool, but the fact we can even determine such a fact is mind-blowing.

"We're measuring the elevation of a liquid surface on another body 10 astronomical units away from the Sun to an accuracy of roughly 40 centimetres," says Cornell astronomer Alex Hayes.

"We are measuring Titan's geoid. This is the shape that the surface would take under the influence of gravity and rotation alone, which is the same shape that dominates Earth's oceans."

The discovery implies some interesting dynamics behind the collection and movement of the moon's liquid hydrocarbons, which largely consist of condensed methane and ethane molecules.

Either the lakes are connected by streams that are large enough to allow the liquid to balance out, or there's something else going on out of sight beneath the surface.

By comparing the elevations of what seem to be dry lake beds with the positions of depressions filled with liquid, the team concluded there were subsurface channels carrying hydrocarbons to lower points.

"We don't see any empty lakes that are below the local filled lakes because, if they did go below that level, they would be filled themselves," says Hayes.

"This suggests that there's flow in the subsurface and that they are communicating with each other."

It also suggests there's an even greater volume of liquid hydrocarbons on Titan flowing out of sight.

The map might be helping us get a better understanding of the way liquid flows on the moon, but it's also thrown up a brand new mystery to solve.

Some of the liquid-filled depressions look remarkably like geological structures on Earth called karsts; 'cookie cutter' holes that form as underlying rocky material dissolves and allows the surface to collapse.

As on Earth, Titan's karst-like structures have no obvious surface channels to carry pooling liquid in or out. But unlike our depressions, these ones have sharp, raised edges.

It almost seems as if the edges are consistently expanding. In fact, the largest lake in Titan's south looks remarkably like a collection of these holes melded together.

"But if these things do grow outward, does that mean you're destroying and recreating the rims all the time and that the rims are moving outward with it?" says Hayes.

Cassini might be gone. But it's clear the probe's legacy will be feeding our curiosity of Saturn and its moons for many years to come.

This research was published in Geophysical Research Letters.