Trees are ubiquitous around the globe. Everyone knows that a tree grows up from a seed in the ground. It's a normal occurrence.

But in order to do so, the tree needs to work against gravity - and now researchers have figured out the secret that allows them to do this. Spoiler: It's bark.

This is something of a surprise, because previously, scientists had thought for a long time that it was the internal forces in the wood of the tree that worked to offset gravity, and the bark's function purely to protect the plant from outside threats, much as skin does.

In order to grow against gravity, plants need two things. The first is a "skeletal" system. This is the trunk, which is both rigid and strong, but that's not enough.

It also needs a "motor" or "muscle" system, which can control and correct the posture of the tree by applying forces that work against the gravitational forces that could prevent the tree from growing straight and vertical.

Over the years, several studies have suggested that the vertical posture of trees is controlled by internal forces during the formation of fibres in the wood.

However, a few other studies have found that bark may play a role - and this is what researchers from the French National Center for Scientific Research set out to discover. 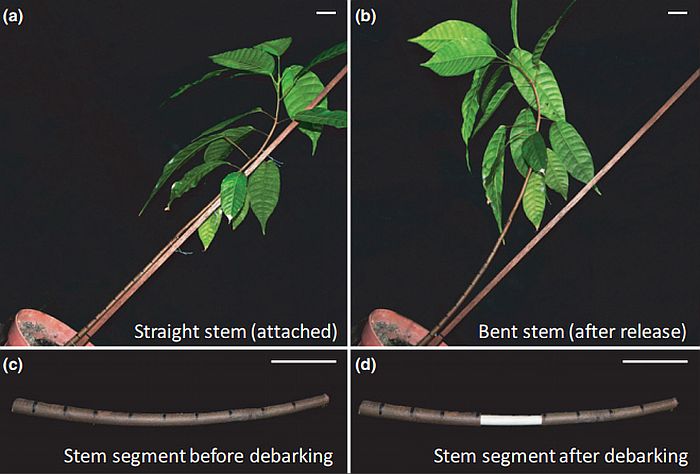 Between 8 and 12 plants of each tree were then grown in a lab, from a seed, seedling, or sapling. After being allowed to grow for a period of between 3 and 10 months, they were replanted at a 45-degree angle and staked.

When the stakes were removed, the trees, which had grown along the stakes, developed a curve as they corrected course to grow straight up perpendicular to the ground.

But when the bark was removed, 5 of these 9 tree species lost this curve - suggesting that the bark was playing an instrumental role in keeping the tree pointing towards the sky.

The next step was to study the bark itself to figure out how. When the researchers studied the interior structure of both stem and bark, they found that the fibres in the bark were organised in a sort of trellis structure.

As the tree grows, the circumference of the bark increases; this causes the trellis to generate forces along the stem to keep it growing upright.

In 4-6, the trellis can be seen. It's much more compact on the top side of the curved stem. (Clair et al./The New Phytologist)

When the stem is tilted, something interesting happens. Growth is more rapid on the upper side of the stem. This causes the trellis to generate an asymmetrical force, which then causes the curvature in the stem - like paddling harder on one side of the boat causes it to turn - to offset the effect of gravity.

Although this wasn't a universal effect, it could, the researchers said, be widespread among vascular plants.

"It is noteworthy that in species that do not rely on this mechanism, tissues produced by sister cells on the wood side and on the bark side are in conflict, evidencing that, in nature, design does not only respond to the best engineering solution to a given design problem but accounts for other vital functions," the researchers wrote.

"However, the species highlighted in this study showed that well designed structural organisation may lead sister cells to act in synergy to control forces."

The research has been published in the journal The New Phytologist.