No walls will be coming down in the tomb of ancient Egyptian pharaoh Tutankhamun. After conducting a thorough investigation, the Egyptian Ministry of Antiquities has definitively declared that it contains no secret chambers after all.

This marks the third radar survey of the tomb, the most comprehensive yet, and, the Ministry says, the conclusive word on the subject.

The notion that the 3,300-year-old tomb was harbouring a secret chamber was raised to much excitement in 2015.

British Egyptologist Nicholas Reeves of the University of Arizona announced that features on the wall of the chamber in which the pharaoh was interred showed evidence of once being a doorway.

Then-Minister of Antiquities Mamdouh Eldamaty said at the time, "We can say more than 90 percent that the chambers are there."

Eldamaty was replaced in March 2016. The locations of the chambers, according to Watanabe's scans. (Ministry of Antiquities)

Part of the clamour was because of what could be hidden in that chamber.

The most exciting hypothesis was that it could be the missing remains of one of the most famous queens of ancient Egypt - Tutankhamun's stepmother, Nefertiti.

According to Reeves, Tutankhamun's tomb may have been originally built for the queen, who died in 1330 BCE.

However, when the young pharaoh then died unexpectedly in 1323 BCE at the age of 19, it's possible, Reeves said, that the tomb was requisitioned for his interment, and  Nefertiti's body stuffed away in a chamber that was then plastered over.

However, confirming these findings would require taking out the wall in question - gorgeously decorated - which, understandably, the Ministry was reluctant to do without absolute certainty.

A second set of scans was conducted by a separate team in 2016, but that team could not replicate the results of the first scans, the raw data of which was never released for review, since Watanabe has customised his equipment to such a degree that he believes no one else would be able to interpret the data.

The second team found no evidence of hidden chambers.

Now the third set of scans, led by archaeologist Francesco Porcelli of the Polytechnic University in Turin, has performed the function of a tie-breaker. 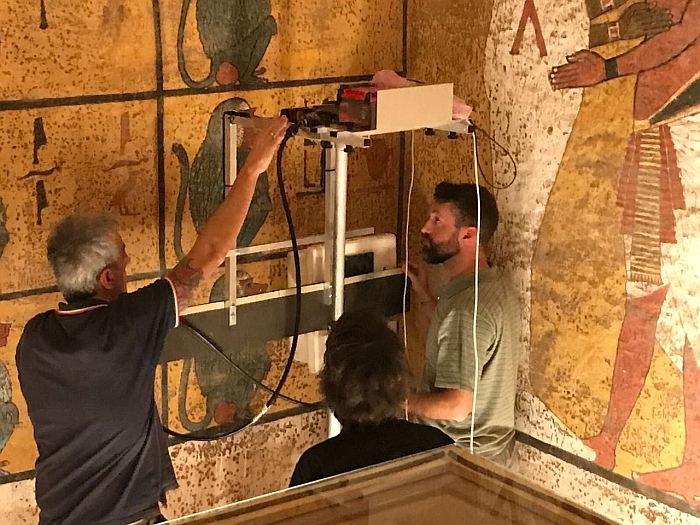 Porcelli and his team scanning the tomb. (Ministry of Antiquities)

The team used ground-penetrating radar - nondestructive technology often used to find cracks and cavities under the ground - to comprehensively scan the walls of the tomb.

They performed the scan along vertical and horizontal axes with very dense spatial sampling, using double antenna polarisations, looking for evidence of an empty space.

The Ministry wrote in a statement:

"Dr. Porcelli asserted that the main findings are as follows: No marked discontinuities due to the passage from natural rock to man-made blocking walls are evidenced by the GPR radargrams, nor there is any evidence of the jambs or the lintel of a doorway. Similarly, the radargrams do not show any indication of plane reflectors, which could be interpreted as chamber walls or void areas behind the paintings of KV62 funerary chamber.

"It is concluded, with a very high degree of confidence ... the hypothesis concerning the existence of hidden chambers or corridors adjacent to Tutankhamun's tomb is not supported by the GPR data."

The team do believe they may have found what caused the false positives in Watanabe's data.

They believe the painted plaster walls that cover the limestone may have conducted the radar in places, instead of absorbing it.

This means that the radar waves could have travelled along the walls before returning to the receiver, showing not a hidden chamber, but the very room in which the researchers were scanning.

It's unlikely further scans will be conducted in the tomb, and the matter will now be put to rest.