Tibet has been struck by two huge glacier slides in the space of two months, and scientists are scrambling to figure out what caused them.

The first avalanche in July shifted 65 million cubic metres (over 2 billion cubic feet) of snow and ice, tragically killing nine herders and hundreds of animals. The second, in September, was smaller, and caused no loss of life, but still stretched over several kilometres.

Both occurred close to each other on the Aru mountain range. With normal temperatures and rainfall over the months in question, and the glaciers sitting on fairly flat terrain, it's not easy for experts to figure out what's happened – but that will be crucial if we want to be prepared for the next one.

"Even one of these gigantic glacier avalanches is very unusual," glaciologist Andreas Kääb from the University of Oslo in Norway told NASA's Earth Observatory. "Two of them within close geographical and temporal vicinity is, to our best knowledge, unprecedented." 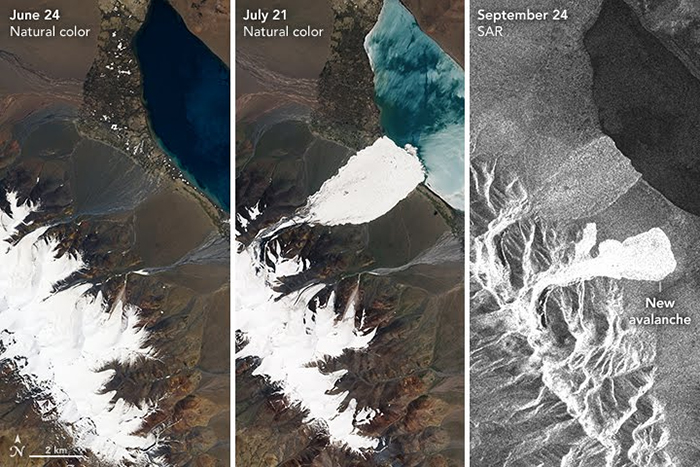 To figure out what could be behind the first collapse, an international team led by glaciologists from ETH Zurich in Switzerland began running computer simulations on the first avalanche, identifying crevasses and changes in elevation along the range.

This research – which was underway before the second avalanche occurred in September – suggested that the first collapse might have been caused by a phenomenon known as surging. This happens when ice flows rapidly from the top to the bottom of a glacier.

Not only does that cause the glacier to advance at between 10 to 100 times its normal speed, but it can also cause an accumulation of water inside it, loosening the icy foundations of the glacier and prompting a collapse.

Longer-term temperature and precipitation rises in Tibet, coupled with the glacial surge getting stuck in a narrow valley, might have accelerated this build-up of water and caused the massive slides, the researchers suggest.

Surging isn't a common phenomenon in Tibet, but in the course of their research, the team also identified a neighbouring glacier with a very similar shape and characteristics.

The researchers issued an avalanche warning for this second glacier on September 21 – which turned out to be the very day it also collapsed.

While that warning came too late to do take any pre-emptive action, it's a promising sign that scientists are starting to better understand how these avalanches form, meaning we could be better prepared next time.

The only other singular event of a similar scale that scientists have to go on is the Kolka-Karmadon ice avalanche that occurred in the Russian Caucasus in September 2002. On that occasion, the glacier slid 19 kilometres (12 miles) and more than 100 people were killed.

An accumulation of ice and debris rather than surging was thought to be the cause, however.

In the case of Tibet, the fact that these kinds of collapses are so rare – and a double collapse like this is unheard of – still has researchers confused.

Kääb said there's no firm evidence yet of a direct physical connection between the two unstable glaciers, although shared factors, including weather and climate, are likely to be part of the cause.

While the researchers continue investigating what could be behind this incredible double avalanche, let's hope the next one doesn't catch us by surprise.