If 2016 hasn't been strange enough already, it's now flooding in the Australian outback, with record-breaking rains hitting the Northern Territory on Boxing Day.

The Christmas downpour, which saw the Uluru-Kata Tjuta National Park temporarily closed to the public due to safety concerns, turned the massive red rock into a backdrop for several vast waterfalls, as rainwater spilled down into its folds and crevices.

The extreme weather made for some incredible photos, but it's been particularly dangerous for locals and tourists, with several homes flooded already, and concerns over dangerous driving conditions.

"There's a lot of water … coming off the rock, and what that does is just channels across the ring road around Uluru, some of those roads there were flooded by about 300 to 400 mm of rain," Uluru-Kata Tjuta National Park manager Mike Misso told the ABC.

Here's what Uluru - one of Australia's most recognisable natural landmarks - usually looks like:

And here's what those torrential rains did to it:

Uluru flooded - an emblematic shot at the end of a year when everything seemed to be upended. #2016 pic.twitter.com/ijek7lUb2m

Images from the site, tweeted by Lee Hewes (@waginski): 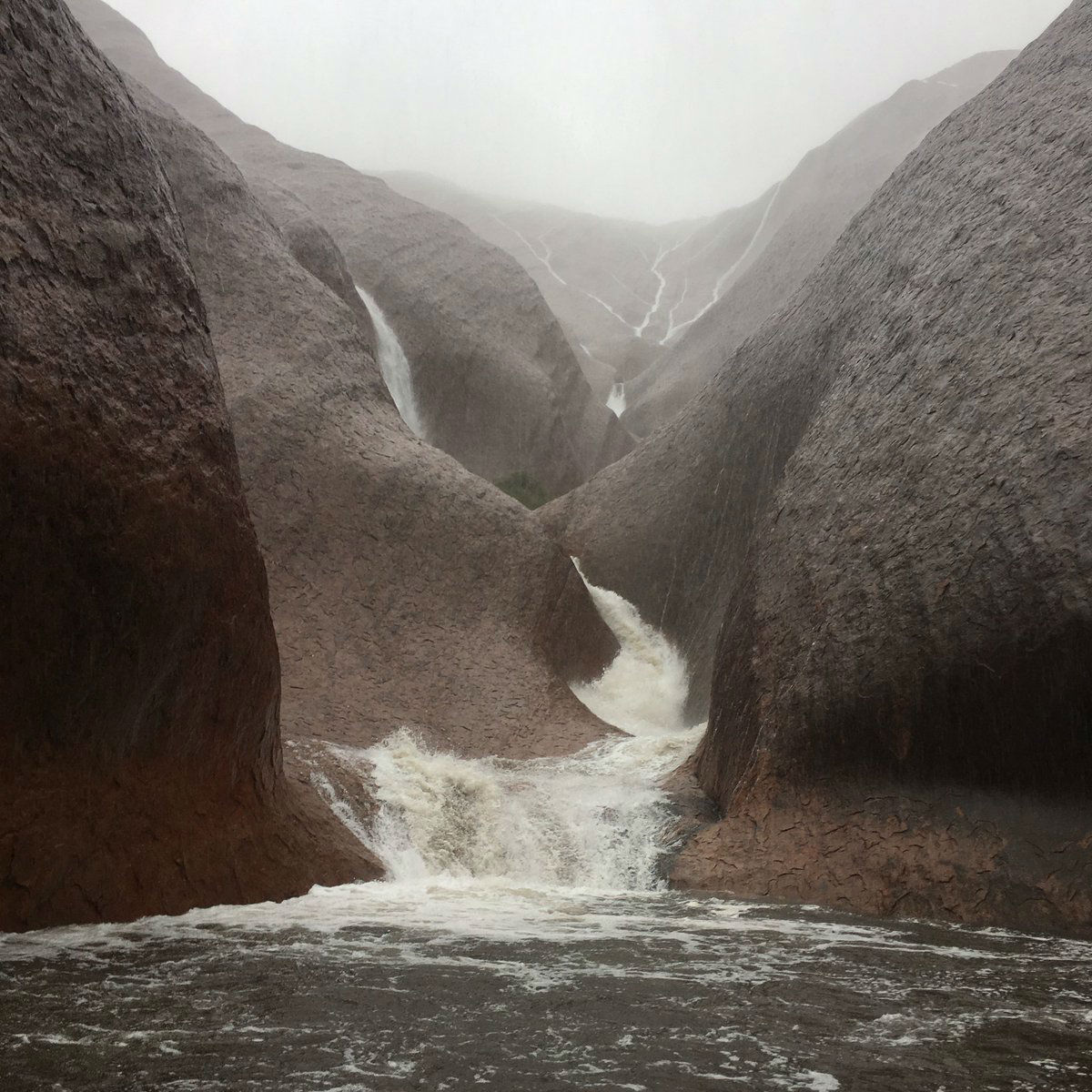 On Christmas night, 61.4 mm of rain fell from 8:00pm to 9:00pm, with Australia's Bureau of Meteorology telling the press it was a once-in-50-year rainfall event.

According to News Corp Australia, Northern Territory Police Central Desert Division acting superintendent Pauline Vicary said that between 12.30pm on Sunday 25 December and 8.30am on Monday 26 December, an estimated 398 mm of rain fell in the remote community of Kintore near Uluru.

Rain in December wasn't entirely unexpected, seeing as this is the wet season for the Northern Territory, but no one was expecting this kind of downpour or flooding.

"Speaking to some of the rangers who've been here a long time, they haven't seen rain like this for several years," Misso told the Associated Press.

The Bureau of Meteorology said the extreme event was down to a deep low-pressure system moving slowly across the Northern Territory on Christmas Day, carrying destructive winds, heavy rain, and the risk of flash flooding, with it.

The rock is wet on average of 4 times a year. Sometimes it can go 2 years without any rain. Such an interesting way to experience #Uluru

With 25 houses in the Kintore community flooded, and dozens of people evacuated, the rains have turned numerous lives upside down, and rescue teams are now working to get families back in their homes.

But the one positive thing out of the ordeal is that the environment will certainly make use of all the extra moisture.

"The desert landscape is like a sponge, it sucks up the water very rapidly," said Misso.

"What we'll see over the next few weeks and months is an explosion of rich vegetation. The desert will bloom."