Physicists around the world have been racing to build a nuclear fusion machine that can replicate the atom-fusing process that's fuelled our Sun for the past 4.5 billion years, in a bid to provide humanity with clean, safe, and practically limitless energy.

And now the US government has just backed plans for physicists to build a new kind of nuclear fusion device that could be the most viable and efficient design yet.

Nuclear fission - which is what our current nuclear facilities perform - generates energy by splitting the nucleus of an atom into smaller neutrons and nuclei.

While this process is super-efficient - the amount of energy it releases is millions of times more efficient per mass than coal-based processes - it requires extremely costly management of dangerous radioactive waste.

Nuclear fusion, on the other hand, produces no radioactive waste or other unwanted byproducts. It generates massive amounts of energy when the nuclei of two or more lighter atoms are fused into one heavier nucleus at incredibly high temperatures, and is so efficient, it's been fuelling our Sun for the past 4.5 billion years.

If we can essentially 'miniaturise' this process, and build machines that can sustain nuclear fusion on a smaller scale, humanity is pretty much set for its energy needs for as long as we’re in existence.

But physicists have been trying to build commercially viable nuclear fusion devices for more than 60 years now, and it turns out that trying to put a 'star in a jar' is about as difficult as it sounds.

As we explained earlier this year, the biggest challenge is that nuclear fusion machines require far higher temperatures than fission facilities.

While nuclear fission requires things to be heated to just a few hundred degrees Celsius, nuclear fusion machines have to recreate conditions on the Sun, so we’re talking several million degrees here.

And because nuclear fusion machines are basically starting their reactions from scratch, we first need to achieve temperatures far hotter than those estimated to exist in the centre of the Sun - at least 100 million degrees Celsius.

So far, the closest anyone’s gotten to the dream of limitless energy is a team of physicists at the Wendelstein 7-X stellarator in Greifswald, Germany, and researchers at China's Experimental Advanced Superconducting Tokamak (EAST) - both of which have been trying to hold onto the super-heated plasma that results from the fusion reaction.

"During the process of nuclear fusion, atoms' electrons are separated from their nuclei, thereby creating a super-hot cloud of electrons and ions (the nuclei minus their electrons) known as plasma," Daniel Oberhaus explains for Motherboard.

"The problem with this energy-rich plasma is figuring out how to contain it, since it exists at extremely high temperatures (up to 150 million degrees Celsius, or 10 times the temperature at the Sun’s core). Any material you can find on Earth isn’t going to make a very good jar."

To give you an idea of how difficult this is, earlier this year, the German nuclear fusion machine managed to heat hydrogen gas to 80 million degrees Celsius, and sustain a cloud of hydrogen plasma for a quarter of a second. It might seem like a blip, but it was hailed as a massive milestone.

China’s facility has since claimed to have beaten that, announcing back in February that it produced hydrogen plasma at 49.999 million degrees Celsius, and held onto it for 102 seconds.

So far, neither machine has been able to prove that it could produce a sustained amount of energy through nuclear fusion, just that it could get the materials hot enough to begin the process.

But now physicists at the US Department of Energy's Princeton Plasma Physics Laboratory (PPPL) think they have a better way.

A nuclear fusion machine is basically like trying to put a star in a jar, the PPPL team wants to redesign the jar, using better materials and a more intuitive shape. 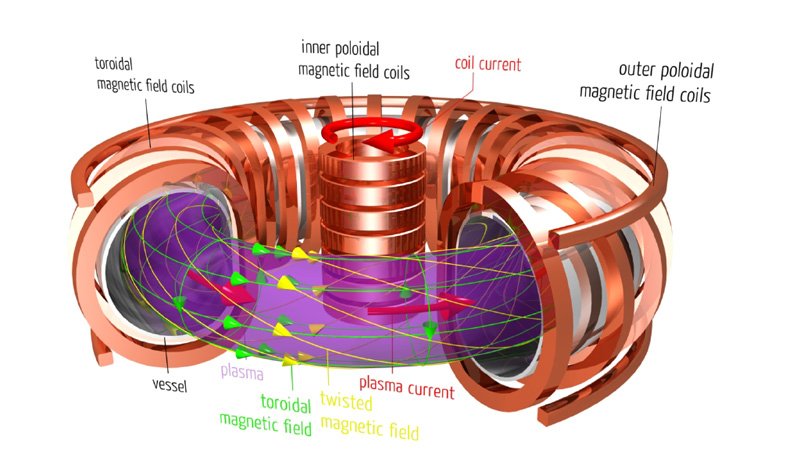 As the team explains in a recent paper, the spherical design can halve the size of the hole in the doughnut shape, enabling the plasma to be controlled with much lower energy magnetic fields.

The team also wants to replace the enormous copper magnets in traditional tokamak designs with high-temperature superconducting magnets that are far more efficient, because electricity can flow through them with zero resistance.

Fortunately, they're not going to be starting their designs from scratch. They'll be applying their designs to two existing spherical tokamaks - the UK’s Mega Ampere Spherical Tokamak (MAST), which is in the final stages of construction, and the PPPL's National Spherical Torus Experiment Upgrade (NSTX-U), which came online last year.

"We are opening up new options for future plants," one of the researchers behind the study, NSTX-U program director Jonathan Menard, said in a statement.

"[These facilities] will push the physics frontier, expand our knowledge of high temperature plasmas, and, if successful, lay the scientific foundation for fusion development paths based on more compact designs," added PPPL director Stewart Prager.

We'll have to wait and see the results, but with the world watching for what NSTX-U and MAST can do, here's hoping they can one-up existing efforts and get us closer to our 'star in a jar' dreams.

The research has been published in Nuclear Fusion.