The remains of a child unearthed in a 5th century CE Italian cemetery are indicative of the unease that must have been felt in the region as a malaria outbreak ravaged the population.

The 10-year-old child was given what is known as a "vampire burial" - with a large rock placed in the body's mouth, possibly to keep the corpse from rising. Tooth marks on the stone indicate it was placed deliberately.

"I've never seen anything like it. It's extremely eerie and weird," said archaeologist David Soren of the University of Arizona. "Locally, they're calling it the 'Vampire of Lugnano.'"

The child, whose remains have not yet been DNA tested, and whose sex remains unknown, was found in the incredibly sad burial ground known as La Necropoli dei Bambini, or the Cemetery of the Babies, over the site of an abandoned 1st century Roman villa in Lugnano, Italy.

Excavations on the site began in 1988, and so far only bones of very young children have been found there. Evidence suggests that all the burials occurred within a very short space of time, and prior DNA evidence revealed the presence of Plasmodium falciparum, the deadliest of the malaria-causing parasites.

The 10-year-old's skeleton is the oldest to have been found in the cemetery; prior to its excavation, the oldest bones belonged to a 3-year-old. The skeleton also had an abscessed tooth, another sign of malaria. 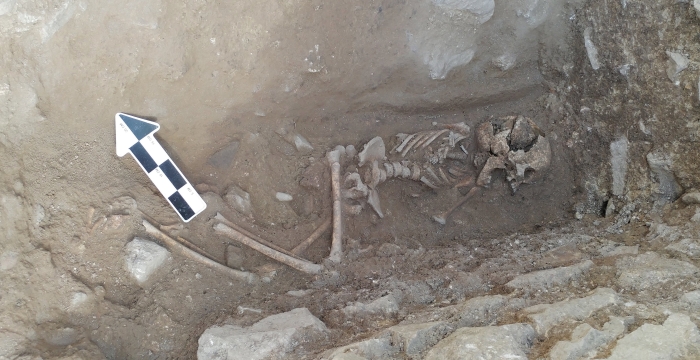 While the Vampire of Lugnano may be the first burial of its specific type from the site, with the rock placed in the mouth, other evidence from the cemetery indicates heavy use of apotropaic ritual.

"Interred near many of the infants were the remains of at least 12 puppies all less than six months old and one dog about a year old, all found with various body parts, usually heads or mandibles, missing," Soren wrote in a 1996 report about the cemetery.

"Since puppies held a prominent place in Roman folk practices, it is likely that these puppies lost their body parts as the result of ritual practices."

Other instances include a child buried raven's talon, a powerful witch's talisman, and another with the partial remains of a toad, thought to be a remedy for disease and fever.

The remains of yet another child, a girl of about 3 years of age, were found with heavy stones on the hands and feet - a practice employed by many cultures around the world to keep the dead from rising.

The presence of the older child, however, suggests that the cemetery wasn't just used to inter the youngest dead - and that the burial rituals used were broader than we knew.

"Given the age of this child and its unique deposition, with the stone placed within his or her mouth, it represents, at the moment, an anomaly within an already abnormal cemetery," said archaeologist David Pickel of Stanford University.

"This just further highlights how unique the infant - or now, rather, child - cemetery at Lugnano is."

These so-called 'vampire' burials have been found before in Italy and Poland, with a stone placed in the mouth or over the body's throat, sometimes with a stake driven into the torso. However, there's no evidence that the living feared vampirism as we know it.

As with the Vampire of Venice, found in a plague pit, it's possible that what the living feared was not Draculas, but the return of the disease that had so devastated their communities.

Excavations at Lugnano have ceased for the time being, but the archaeologists plan to return next year to see what else they can find out - and if they can find any more skeletons of older children.

"Anytime you can look at burials, they're significant because they provide a window into ancient minds," said bioarcheologist Jordan Wilson of the University of Arizona.

"We have a saying in bioarchaeology: 'The dead don't bury themselves.' We can tell a lot about people's beliefs and hopes and by the way they treat the dead."