Yemen Is Fighting Its Severe Water Shortage by Harvesting Its Fog

Finding fresh, clean water in Yemen is no easy task: supplies have become so scarce in the war-torn country that villagers are often spending days fetching enough to drink, wash, and cook with, and climate change is making rainfall levels more unpredictable than ever before. But there's new hope of a better way to source water, thanks to a UN-sponsored initiative designed to harvest it from the fog that floats across the country's landscape.

Fog is ever-present in Yemen, arriving every afternoon and often sticking around to the early hours of the morning. Coffee planters already use rocks to turn this fog into moisture and water their crops. Now locals are using special 3 x 2-metre mesh screens to condense the fog, and just one can reportedly produce enough drinking water for a family of seven.

Fog harvesting isn't a completely new idea - it's previously been used in places like Chile, Morocco, Guatemala, and Haiti, and locals in Yemen have been experimenting with it since 2003. But it's only in the past couple of years that the results have shown enough promise for the technique to be seriously considered.

The United Nations Development Programme (UNDP) and Yemen's National Foundation for Watershed Management are now looking at extending the scheme, and it couldn't have come at a better time. "Already a region beset with serious water shortages in peacetime, Yemen's yearly rainfall is only about 900 million cubic metres, or three quarters of what it needs, according to 2003 data from Sana'a University," Annalisa Merelli reports for Quartz. 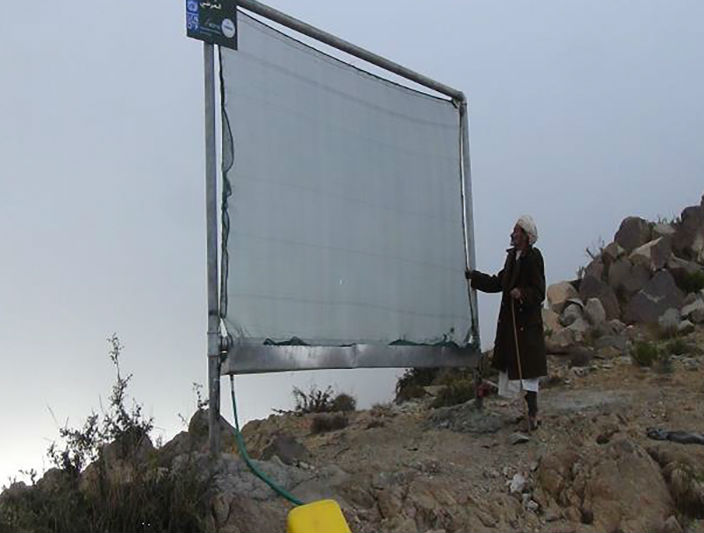 According to the UNDP, 1,563 people have benefitted from the fog harvesting scheme so far, with 215 units installed across two sites in Yemen. It's currently in the process of being scaled up to be used extensively in more areas of the country, together with a range of other initiatives designed to get the most out of the rain that does fall.

"God has given us the fog to quench our thirst," Am Ali, a mother of six from Manakha, Yemen, was quoted as saying. Another villager who has benefitted from the scheme talks about releasing her children from the tedious task of fetching water every day and having fewer concerns over their health - the stagnant, standing water previously used by these people is often of a poor quality and can carry disease.

The UNDP's project has involved installing the fog harvesters, giving locals training in how to use them, and establishing a coffee tree nursery that's now flourishing with the extra irrigation. Alongside the fog harvesters, locally sourced bamboo is being used to build roofs for cisterns in the same area, so the collected water can be safely stored.

Civil war and sanctions have devastated Yemen in recent years, and some estimates suggest the country's capital could run out of water completely by 2017. With each US$15 fog screen collecting 40 litres of water each per day, these new devices could help provide some much-needed help for local communities in the region.