This Strange Mineral Grows on Dead Bodies And Turns Them Blue

If you were to get up close and personal with Ötzi the Iceman – the 5,000-year-old mummy of a tattooed, deep-voiced man who died and was frozen in the Alps – you'd notice that his skin is flecked with tiny bits of blue.

At first, it would appear that these oddly bluish crystal formations embedded in his skin are from freezing to death or some other sort of trauma, but it's actually a mineral called vivianite (or blue ironstone) and it happens to form quite often on corpses left in iron-rich environments.

For Ötzi, the patches of vivianite are from him resting near rocks with flecks of iron in them, but other cases are way more severe.

According to Chris Drudge at Atlas Obscura, a man named John White was buried in a cast iron coffin back in 1861. During those days, coffins often had a window for grieving family members to peer inside even if the lid was closed during the funeral.

Sometime after he was buried, that window broke, allowing groundwater to come inside the iron coffin and interact with his body.

Over a century later, White was exhumed because of land developments in the area. To the shock of everyone around, they found his body completely blue with large blue vivianite crystals forming all over him and inside the coffin. Here's what vivianite looks like on a piece of bone that was buried in sand: 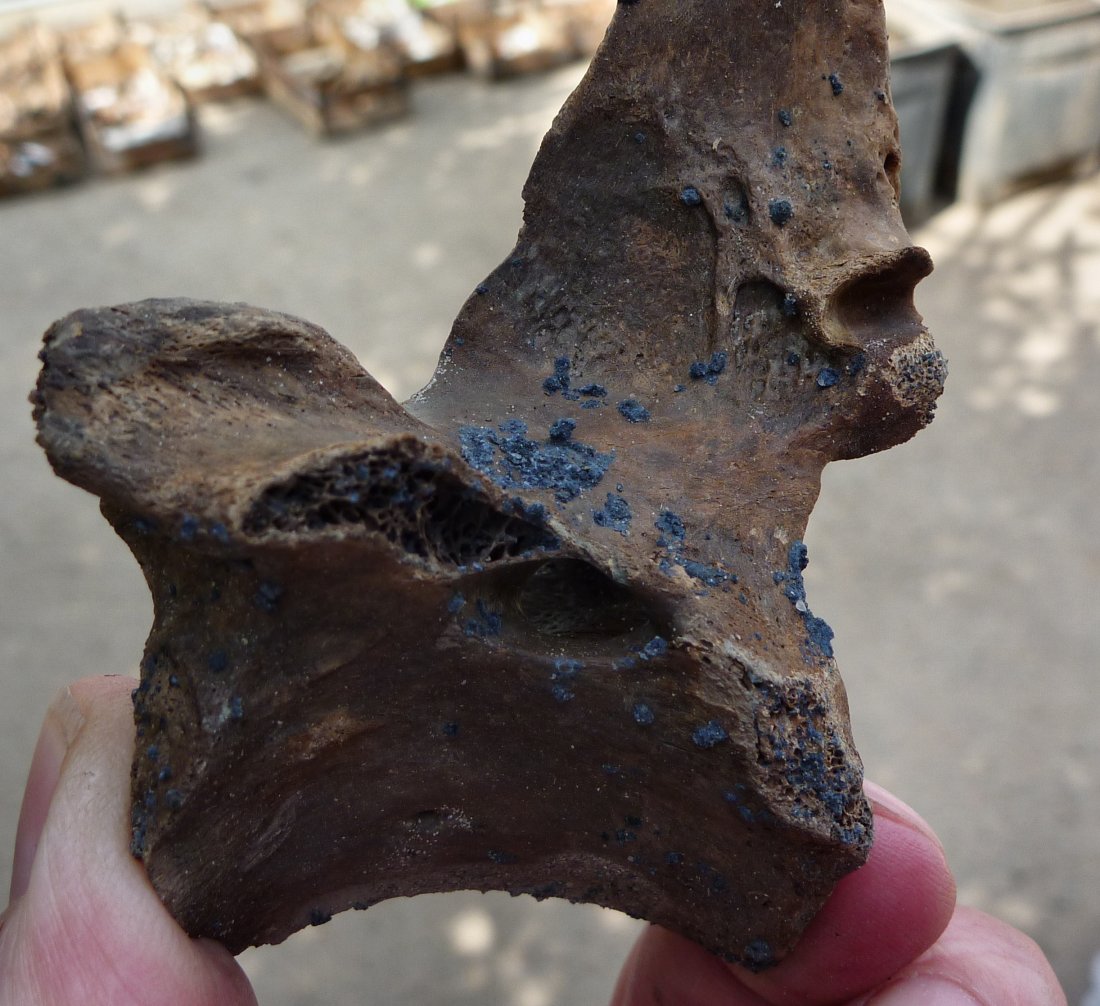 Vivianite has also been found on the remains of American soldiers who died in a plane crash in Vietnam. Researchers were able to tell by the presence of the mineral that the soldiers were likely buried in wet soil alongside pieces of their plane, allowing vivianite to form.

These are just a few examples out of many others where archaeologists have witnessed the odd mineral creeping up on exhumed corpses.

Well, it all has to do with how phosphate interacts with iron and water. While our bodies are composed of many different molecules, the most important for vivianite is phosphate, and luckily it's found all around our bodies.

"Phosphate is present in the hard bits of bones and teeth (as part of the mineral hydroxylapatite), helps hold together strands of DNA and RNA, and is used by cells to store and move energy around as well as to organise their many protein-driven activities," explains Drudge.

So, when a person dies and starts decomposing, all this phosphate leaks out into the environment around the corpse.

If this environment happens to be wet and filled with iron – like that of White's coffin or Ötzi's glacial tomb – the phosphate interacts with these other molecules to form the mineral vivianite.

At this early stage, the crystals are colourless, but if they interact with oxygen in the air, they quickly turn deep shades of blue, creating an odd scene for anyone who happens to find the corpse afterwards.

The formation of vivianite can be a good thing or a bad thing for researchers trying to figure out more about these corpses. For example, the formations might lead to a better understanding of how the corpse was buried and what elements are in the soil around them. It can also shield remains from further decay.

On the other hand, if the team is trying to analyse the DNA of a corpse, vivianite can be a curse, because it has the power to screw up a common study method called polymerase chain reaction (PCR).

PCR involves taking a few strands of DNA and copying them multiple times so researchers have enough to analyse. But since vivianite is bound to phosphate, it can stop the reaction from happening.

So, the next time you read about an archaeological discovery and see that the remains have patches of blue, know that it's vivianite, and hope that the team doing the study doesn't plan on analysing the corpse's remains.

Oh, and you might also want to reconsider where your own burial plot is, if it's in a particularly damp, iron-rich area.