It's Official: Voyager 2 Has Left Our Solar System And Is Sailing in Interstellar Space

Voyager 2 has left the Solar System. After making a careful analysis of the data, scientists have confirmed it: like Voyager 1 before it, the little space probe is now out beyond the heliopause, and heading deeper into the vast unknown of interstellar space.

With five separate papers appearing today in Nature Astronomy, scientists confirm that Voyager 2 crossed into interstellar space on 5 November 2018, at a distance of 119 astronomical units (17.8 billion kilometres) from the Sun.

And, because Voyager 1's plasma instrument was broken when it crossed the heliopause six years earlier, it's the first time scientists have been able to study a full in-situ dataset of the plasma profile of this important boundary.

The two Voyager probes were launched all the way back in 1977 to study the outer Solar System. Voyager 2 was launched first, getting a head start of two weeks, but Voyager 1 was on a shorter trajectory through the Solar System.

In addition, Voyager 2 was slowed by its Neptune flyby in 1989, so Voyager 1 surged ahead as planned. After that 1989 flyby, the two probes had completed their primary objective, but they were far from done.

"At that point," explained astronomer Ed Stone of Caltech, "the mission became the Voyager Interstellar Mission."

Nobody knew how long it would take for the probes to reach interstellar space. With a supersonic wind of ionised plasma, the Sun carves out a bubble of space around the Solar System. 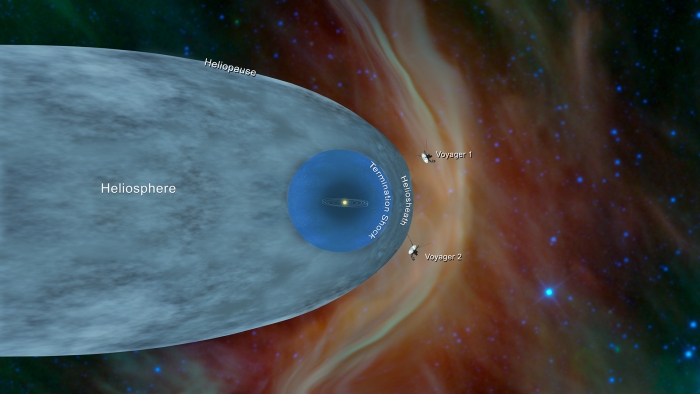 "That contact surface is the boundary, and we are trying to both understand the nature of that boundary where these two winds collide and mix, and how they mix," Stone said.

Voyager 1 officially crossed the heliopause on 25 August 2012, at a distance of 121.6 astronomical units (18.1 billion kilometres).

When the probe made its historical crossing, researchers were only able to confirm this fact eight months later, through electron plasma oscillations from which an interstellar plasma density could be inferred.

We didn't actually know when Voyager 2 might follow suit - the heliosphere is a bit wobbly, and slightly changes shape all the time - but in October last year, it started picking up an increase in cosmic radiation, similar to that experienced by Voyager 1 in 2012.

All systems were go and all hands on deck wringing out every last drop of data for the crossing. This time, the plasma density detection was directly made. And, interestingly, what Voyager 2's five instruments picked up shows a smoother, thinner heliopause, with a stronger magnetic field. According to plasma observations, the probe crossed the heliopause in less than a day.

Voyager 2's cosmic ray instrument also detected something Voyager 1 didn't - evidence of a layer between the heliopause and interstellar space where the two winds interact.

Voyager 1 encountered galactic cosmic rays and the interstellar magnetic field invading the heliosheath; Voyager 2 found the interstellar magnetic field wrapped around the heliopause, and cosmic rays from inside the Solar System streaming out along it. This indicates that the heliopause is not a single, smooth contact boundary, but is far more complex and dynamic.

The reasons for the differences between the two probes' results are not entirely clear, but there are a number of possible explanations. One could be down to timing - Voyager 1 crossed as the Sun was building up to solar maximum, the active peak in its 11-year cycle, when the solar wind is significantly stronger. Voyager 2 crossed as we emerge from solar minimum.

There is also a whole bunch of other stuff we don't know. The heliosphere is a little like a comet's coma, with a nose and a tail as the entire Solar System orbits the galactic centre. Both probes passed through the nose, so we still don't know what the tail looks like.

And, of course, the heliopause is but one boundary of the Sun's influence. Our star's gravitational influence is much, much bigger, extending out through the Oort Cloud as far as 100,000 astronomical units (15 trillion kilometres).

Sadly, it's extremely unlikely the Voyager probes will remain operational for that distance, or that any of us now will be alive to see them reach it.

But their achievements are monumental nonetheless - only the Voyager probes have directly sampled the outer heliosphere, the heliopause, and the beyond. And understanding our Solar System's bubble could help us to understand the astrospheres of other stellar systems, too.