Despite all the intergalactic hopping in science fiction and the occasional extraordinary research claim, most of us have accepted that when it comes to travel, humanity is always going to be limited by the speed of light. Of course, we haven't managed to accelerate anywhere near light speed as yet, but even if we could, Einstein's theory of relativity clearly states that nothing can surpass it.

But astrophysicist Geraint Lewis from the University of Sydney gave a talk last night explaining that, in theory at least, super-fast warp speed travel is possible according to Einstein’s theory of relativity. We just need to find the right materials to achieve it.

"If you look at the equation that Einstein gave us, it shows you can bend and warp space so you can travel at any speed you like in the Universe," Lewis told ABC Science in an interview before his presentation in Sydney, Australia. Of course, the problem is that even if bending space is theoretically possible, we have no idea how to do it.

To achieve warp speed, it won't be our rockets that we need to upgrade. Instead we'll need to find a material that has a "negative density energy", according to Lewis.

"It is not a material that we actually have in our hands, but there are signs that there are aspects of the Universe that actually have this kind of property," he explained. "Empty space itself has a negative energy density. The big question is if we could mine it and shape it, we would basically have a warp drive there and then, but we just don't know if that's possible."

This is something that the NASA's Eagleworks lab is investigating. Run by mechanical engineer Harold 'Sonny' White, the lab last year created mock-ups of what a potential warp drive spaceship could look like. As you can see below, the ship is suspended within two giant rings, which would theoretically create a warp bubble that bends space around the spacecraft. 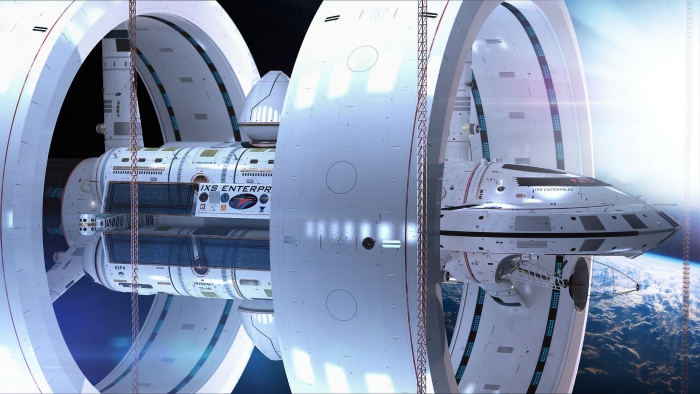 This is the same type of thing that Lewis is proposing, and it means that the ship itself would never actually be travelling faster than the speed of light - it would simply warp space to make its destination closer, so it wouldn't need to violate any of Einstein's laws.

But how do we even begin to know how to bend space? White's team has now set up an interferometer test bed, where they'll use different mechanisms to try and generate and detect microscopic instances of little warp bubbles using a device called the White-Juday Warp Field Interferometer. For now, they haven't found a way to space, but the work has to start somewhere.

Of course, all of that involves a whole lot of 'ifs', and Lewis admits that warp speed is impossible for now. But that it doesn't necessarily have to remain that way.

"You just have to look at the work of Newton 400 years ago, and even people who work in quantum physics 100 years ago, and those things are real today and they started off as dreams essentially," Lewis told ABC Science. "Einstein's theory is already a hundred years old, but we have only started to scratch the surface ... I think in the next 100 or 1,000 years we will reveal a lot more about the Universe and maybe this hyper-fast travel will be realisable."

One thing's for sure, if we do ever find a material with negative density energy and then work out how to manipulate it, it would definitely revolutionise space travel. According to estimates, White's hypothetical warp drive spacecraft could get to our closest neighbouring star system, Alpha Centauri, in "two weeks as measured by clocks here on Earth".

And that's something we need if we ever want to get serious about exploring the Universe.