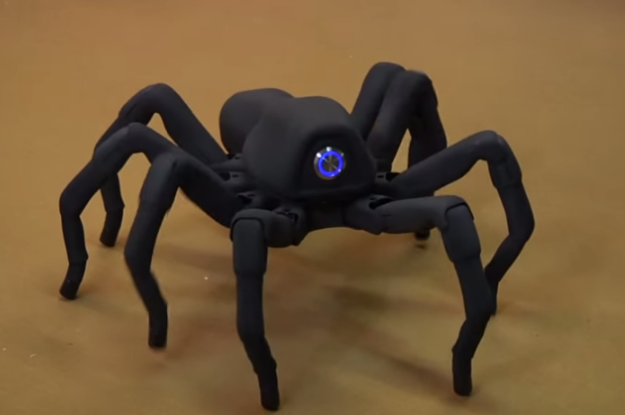 "The object that's in this box exceeded all of my expectations for coolness," says Adam Savage to Tested.com’s Norman Chan. What’s in the box, I hear you ask? Only the most awesome 3D-printed spider robot you could hope to have shuffling around your living room - the limited edition Robugtix T8 robot.

Made by Hong Kong-based robotics company, Robugtix, and retailing for just under $3,000, the Robugtix T8 is not just some cool-looking robot, it’s also an incredibly complex piece of compact machinery. According to Adam, the 300-gram spiderbot is equipped with 26 super-tiny, high-tech motors called servomechanisms - or ‘servos' - three in each leg and two in the posterior, and a controller that’s been pre-programmed with a whole bunch of walking and moving sequences. Together these mechanisms enable the robot to move just like a real spider, distributing its forward motion across each of its eight legs in several fluid movements.

"Just to really be clear, the amount of real math and intense understanding of the way animals and insects move that’s built into this is super-intelligent,” says Adam in the video above. “There hasn’t been another thing that’s this advanced, I don’t think, outside of a university robotics lab."

We'll stop gushing about it so you can just watch the magic above. If any of you out there are cat-haters, we promise to inflict this bad-boy on our cats for comedic effect if you send one our way...