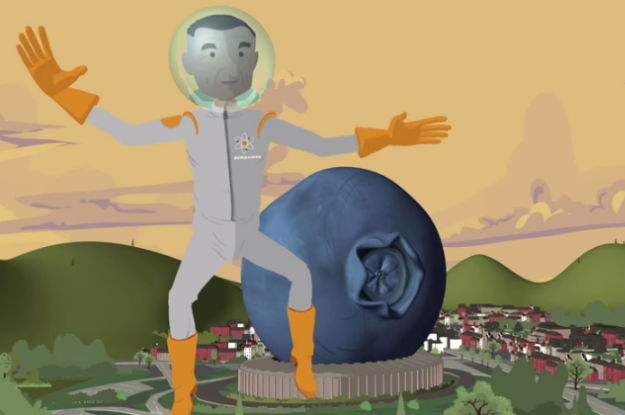 WATCH: Just How Small Is an Atom?

So, you’ve probably heard that atoms are small, right? But have you ever stopped to think just how small these building blocks of life really are? American chemistry teacher Jonathan Bergmann would like to tell you, but strap yourselves in first, because this is going to be a wild, mind-boggling ride.

We start off by thinking about all the atoms in a grapefruit. Let’s pretend it’s only made up of nitrogen atoms. Now let’s blow up each atom to the size of a blueberry. How big would the grapefruit have to be to hold all of these super-sized atoms? Oh, not that big, just, you know, the size of THE EARTH.

So let’s now look inside of one of those blueberry-sized atoms. In the very centre is the nucleus. How tiny do you think that is? Well, says Bergmann in his TED-Ed video, if we blow an atom up to be the size of a blueberry, and you popped the blueberry open and started searching around for the nucleus inside, you wouldn’t find it in a million years - it’s way, way too small to see.

So we’re going to have to blow our atom up to the size of a two-story house. If you pulled on your blueberry-proof scuba suit and dove into the blueberry atom, you’d find the nucleus in the centre, but it would be just barely visible. In an atom the size of a house. That’s ridiculous.

Now, let’s blow the blueberry up to the size of a football stadium. You would finally be able to properly see the nucleus - it would be the size of a marble.

Is your mind sufficiently blown? No? Well Bergmann’s got more for you. Most of the mass of the atom is made up by its protons and neutrons, which are contained inside that tiny, tiny nucleus. So how dense does that make the nucleus? “Well, the answer is crazy,” says Bergmann.

Imagine a box that’s 30 cm by 30 cm by 30 cm. Or one foot each way, for our American readers. “How many cars’s nuclei would you have to put in your box to have your box have the same density as a nucleus?” says Bergmann. Turns out you’ll need 6.2 billion cars. So 6.2 billion cars, all squished into a tiny box will give you the same density as just one of the nuclei floating around in a single atom.

Our heads hurt, we need to lie down.

Watch Bergmann do his magic in the TED-Ed video above. Science is AWESOME.