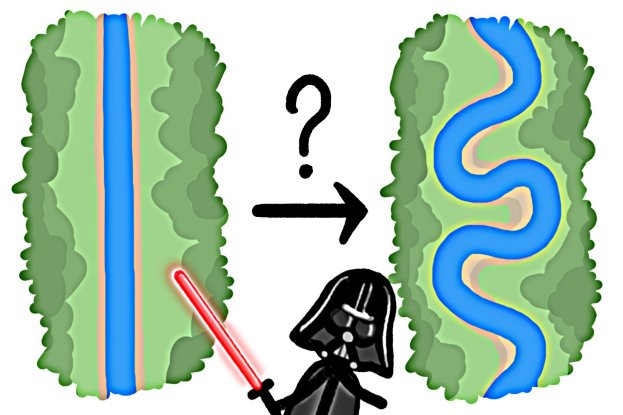 WATCH: Why Do Rivers Curve?

Don't be deceived - while big, wide rivers winding their way across a plain may not seem particularly productive, they're constantly ploughing their way through soft soil and creating ever-changing courses that almost never run straight.

So what causes a river to bend in the first place? As the latest episode of MinuteEarth explains, all it takes is a little disturbance and a lot of time. And in nature there's plenty of both of those.

Imagine, for example, that an adorable little family of muskrats decides to make a burrow in one side of a stream. This cosy home weakens the bank and eventually it'll collapse, allowing water to rush into the newly formed hollow. As it sweeps away more dirt, the hollow begins to get bigger and bigger, allowing the water to flow into it quicker and quicker.

As the flow on one side of the river gets faster, it begins to slow down on the other. And because fast-moving water is required to help move along small sand-sized particles, all this dirt moves to the bottom, making the river shallower and shallower, until eventually it becomes land.

So far so obvious, but this is where it gets interesting - while one side of the river is drying up, the fast-moving water on the other side sweeps around the newly-formed curve with enough momentum to rush across the channel and SLAM into the bank on the other side, causing another curve to form, and then another, and another... until eventually you have a windy, snake-like river.

And fascinatingly, all over the world rivers generally follow the same pattern - the length of one S-shaped curve tends to be around six times the width of the channel. This means that rivers are pretty much fractals, because tiny, bendy streams are just smaller versions of their bigger relatives.

As long as nothing gets in the way of these curves, a river will become bendier and bendier until eventually the curves bump into themselves. When that happens, the river's channel follows the straighter path downhill, leaving behind detached oxbow lakes, which can be seen anywhere liquid used to flow - including on Mars.

Watch the episode above to find out more about how a river's course changes over time, and the processes that have influenced the formation of the landscapes we see both here on Earth and in the rest of the Solar System.