A sunspot observed by the GREGOR telescope. (KIS)
SPACE

The surface of the Sun is a turbulent dance of gravity, plasma, and magnetic fields. Much like the weather on Earth, its behavior can seem unpredictable, but there are patterns to be found when you look closely.

The first pattern to be observed on the solar surface was that of sunspots. Sunspots were noticed by a few ancient astronomers, but they have been regularly studied since the 1600s.

As astronomers counted the number of spots seen each year, they found the Sun goes through active years and quiet years. There is an 11-year cycle of high and low sunspot counts. There are other cycles as well, such as the Gleisberg Cycle, which lasts 80-90 years.

These patterns are similar to the tornado seasons of the American Midwest, or the El Niño/La Niña cycles of the Pacific. These large patterns have a regularity that makes them easy to anticipate.

But while predicting sunspot cycles is relatively easy, predicting the appearance of an individual sunspot is not.

One of the challenges with sunspot prediction is that we can't put sensors directly on the Sun's surface. Measuring the magnetic fields that create sunspots is difficult.

But astronomers have learned that the Sun can be studied using sound waves, and this technique is starting to let them predict individual sunspots.

One of the projects studying the Sun in this way is the Global Oscillation Network Group (GONG). It is a collection of six solar telescopes that measure the motion of the Sun's surface 24/7.

The vibrations of the Sun's surface are caused by sound waves moving through the Sun's interior. The study of the Sun in this way is known as helioseismology.

While it is mainly used to study the solar interior, the sound waves are also affected by surface features such as sunspots, and recently the GONG team used this feature to predict one.

About a week ago, the GONG team noticed that the acoustic solar vibrations seemed to be disrupted by a feature on the far side of the Sun. They couldn't see the feature, but it was consistent with that of a sunspot. 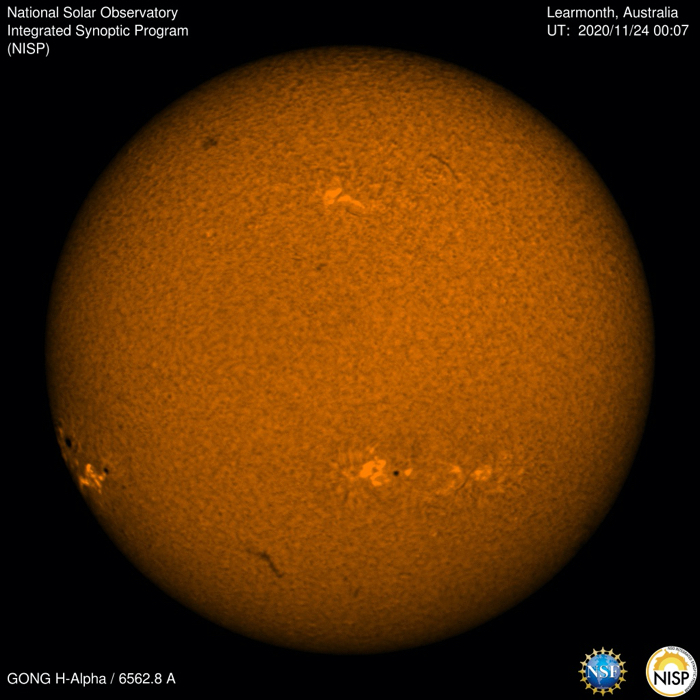 The predicted sunspot cluster, on the left, rotating onto the face of the Sun. (NSO/AURA/NSF)

So the team predicted that a sunspot cluster could be visible from Earth around Thanksgiving. And it turned out they were right.

This kind of prediction is extremely useful because large sunspots are often accompanied by other activities such as solar flares.

Intense solar flares can disrupt modern satellites such as GPS, and in the most extreme case could threaten to collapse our electrical grid. Predicting these events several days in advance will give us time to mitigate their effects.

With further research, the GONG team and others might even be able to predict the appearance of sunspots before they form.

This would give us well more than a week to prepare for any threat from solar flares and would give all of us who use this technology reason to breathe a bit easier.