Researchers Have Built a Plasma Jet That Can Touch Stuff, Like a Tiny Lightsaber

Nothing says welcome to the future like having your wound fixed by a tiny lightsaber. It might sound wild at first, but that's basically what a new plasma technology advance is now promising.

Engineers from the University of Electronic Science and Technology of China have found a way to unleash a flow of microwave-generated ions so it extends far enough to touch nearby surfaces.

If you're not sure what atmospheric pressure plasma is, the most important parts are in the name.

Unlike directed streams of charged particles that can only be produced in a vacuum or under intense pressures, this plasma is made of supersonic blobs of stable gas, or 'plasma bullets', that don't require a specific pressure.

There are a variety of ways they can be produced, such as by exciting particles with different currents or low-frequency electromagnetic radiation - such as microwaves. But all of these bullets can be pumped out at rather benign temperatures, lending them to a variety of heat-sensitive applications that could use streams of ions.

Engineers can use bundles of tiny APPJs to ionise surfaces of materials, for example. Physicians could also use them to sterilise wounds, clean teeth, and even help blood coagulate.

"With the development of low-temperature plasma jets, the applications of plasmas used in biomedical fields would be extended for use not only as a surgery knife, but also for skin treating, sterilisation, and cancer therapy," says engineer Wenjie Fu.

There's just one tiny problem. Until now, these plasma jets tended to suffer from a frustrating limitation – to stabilise their flow, you'd need a polarised tube made of a material such as quartz.

This would be like wrapping a lightsaber in a clear plastic tube to keep it contained: not entirely practical or desirable.

To do away with such a tube container without raising the jet's temperature, researchers ditched the kinds of microwave guides other devices used to generate the plasma and turned instead to a coaxial cable type structure.

Tinkering with the distances between the conducting elements in the lines, they could increase the electric field density of the microwaves without adding power.

A few critical adjustments to the end of this coaxial transmission system also allowed them to channel a gas around the outside and the plasma down the centre, allowing them to ditch the quartz tube and still tune the gas's characteristics.

The result is an exposed, directed stream of plasma that can kill microbes and coagulate blood, and is cool enough to touch; or it can be ramped up to incinerate flesh (for surgical purposes). 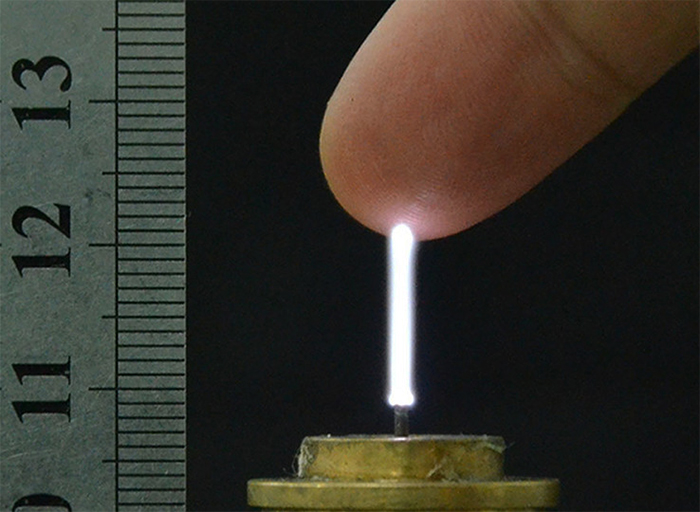 It's still early days for this kind of medical technology, but with the proof of concept now looking solid, a commercial version of such a 'light scalpel' could be in your doctor's hands in the not-too-distant future.

This research was published in Applied Physics Letters.