Astronomers have spotted a spectacular gamma-ray binary system in a galaxy right next door to our own, and not only is it the first to be found outside the Milky Way - it's also the brightest one yet.

Gamma-ray binaries are systems with two stars: a star like our own Sun, coupled with either a black hole or a small, dense neutron star. These black holes or neutron stars radiate gamma rays - the highest-energy form of light - and this newly discovered system breaks existing luminosity records.

It's fair to say that living in this binary system would be a whole lot different from here in our own Solar System, as the central star is some 25 to 40 times larger than our own Sun.

Until now, only five such systems have ever been detected. The newly discovered sixth has been called LMC P3, and sits some 163,000 light-years away from us in a small galaxy called the Large Magellanic Cloud.

"Finding [a gamma-ray system] so luminous and distant is quite exciting," said lead researcher Robin Corbet from NASA's Goddard Space Centre. "Gamma-ray binaries are prized because the gamma-ray output changes significantly during each orbit and sometimes over longer time scales."

"This variation lets us study many of the emission processes common to other gamma-ray sources in unique detail."

Astronomers have actually known about LMC P3 since 2012, but new data from NASA’s Fermi Gamma-ray Space Telescope and other facilities means it's now been upgraded to a gamma-ray binary.

The second orbiting object, which takes 10.3 days to swing around the larger star, is believed to be a neutron star.

Oddly enough, this isn't the only discovery in the Large Magellanic Cloud to be announced this week: researchers from Tohoku University in Japan have spotted a star called ST11, with an entirely different molecular make-up than the ones we're used to.

It's a hint that life beyond the Solar System could be like nothing we've ever imagined.

ST11 is surrounded by a hot molecular core - one of the early stages of high-mass stars, which is responsible for forming complex molecules out in deep space.

These molecules can eventually form planets, comets, and asteroids, but the ones spotted around ST11 aren't like similar cores from the Milky Way. 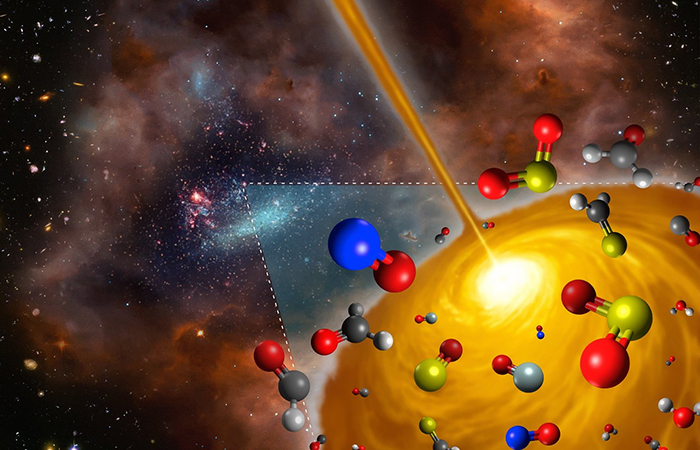 Sulphur dioxide, nitric oxide, and formaldehyde were found in abundance, while levels of organic compounds such as methanol were surprisingly low.

It's also the first hot molecular core to be found outside our galaxy.

"The observations suggest that the molecular compositions of materials that form stars and planets are much more diverse than we expected," said one of the team, Takashi Shimonishi.

Shimonishi and his colleagues used the Atacama Large Millimeter Array (ALMA) to study ST11 in detail, and super-powerful telescopes like ALMA and Fermi are giving us an unprecedented look at the galaxies beyond the Milky Way - and how weird and wonderful they are compared to our own.

The discovery of LMC P3 has been reported in The Astrophysical Journal.

The study of ST11 has also been reported in the same journal.