They were the largest animals to ever walk the Earth: sauropods, a dinosaur clade of such immense size and stature, they're sometimes dubbed 'thunder lizards'.

These towering hulks – including Brontosaurus, Brachiosaurus, and Diplodocus among others – needed four thick, powerful legs to support and transport their massive bodies. At least, most of the time. Perhaps.

Some mysterious, ancient tracks described in a 2019 study could offer fresh support for a disputed view in paleontology: that these lumbering giants sometimes got around on two legs, not four, belying what their quadruped status (and simple physics) would seem to demand. 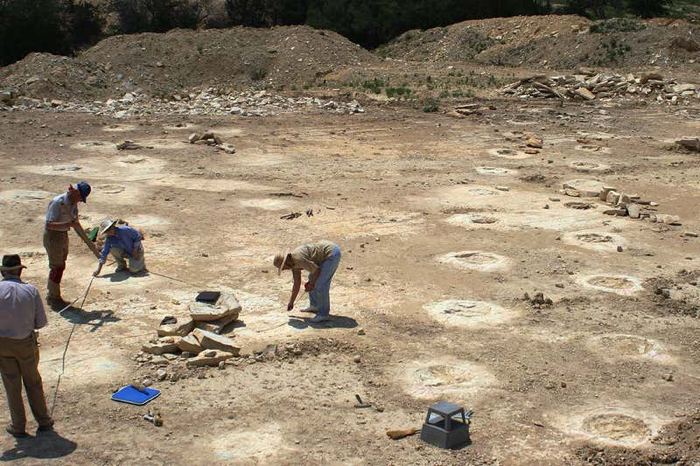 As strange as it might sound, this hypothesis dates back several decades, to when fossil researcher Roland T. Bird identified some unusual dinosaur tracks laid down on ranch grounds in the county of Bandera, Texas.

What made the tracks unusual was that the marks were manus only, referring to footprint impressions made by front limbs, not the rear limbs (known as pes).

"Without a doubt made by a sauropod, but as I interpret them, made by an individual while swimming," Bird wrote in a letter in 1940.

"They were all typical forefeet impressions as if the animal had just been barely kicking bottom."

With time, Bird's interpretation of these manus-only tracks fell out of favor, as modern paleontology came to realize that sauropods were primarily land animals, not aquatic as was once thought.

The alternative view to explain manus-only tracks like this is that the forefeet of sauropods (supporting more of the animals' body weight) are all that leaves track marks on certain kinds of ground surfaces, as the rear limbs, supporting less weight, leave less impression on soil and sediment. 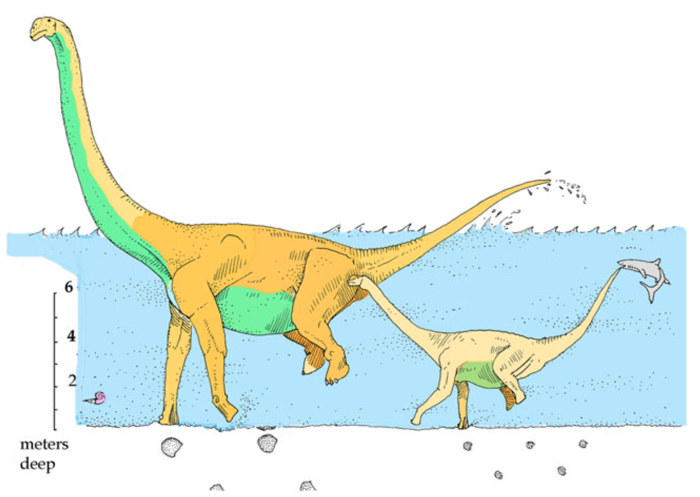 While that might now be the generally preferred interpretation of manus-only sauropod tracks, the case for dinosaurs treading through shallow, shoulder-height bodies of water on their front limbs (with their rear limbs not reaching the ground) has never been definitively ruled out.

A series of sauropod tracks in Texas gave paleontologists a chance to reconsider the merits of the arguments.

The marks were first identified in 2007 in a limestone quarry called the Coffee Hollow, which makes up part of the Glen Rose Formation, a geological site that preserves numerous dinosaur footprints dating back approximately 110 million years ago (within the Cretaceous period).

Three different trails of parallel, manus-only sauropod trackways were investigated at the site by teams from Purdue University Fort Wayne and the Houston Museum of Natural Sciences, with several dozen individual footprints being preserved for study (before the surface layers were removed for commercial purposes).

While we don't know for sure what kind of sauropods left these manus-only marks, the researchers highlighted the possibility that it could be a different kind of dinosaur to those responsible for other manus-only footprints previously seen in the Glen Rose Formation.

Given the size of the footprints (up to about 70 centimeters [27.5 inches] long and wide), it is likely the tracks belonged to larger kinds of sauropods, and the trackmarks look to be 'true tracks' left on the upper surface, as opposed to undertracks (impressions made in lower layers of sediment).

As for whether the marks support the idea of differential foot pressure or of "unusual behavior" (left by dinosaurs semi-swimming, or punting through shallow water), the researchers said it's impossible to be sure, but acknowledge what is perhaps more likely, given the weight of what other fossil evidence tends to suggest.

"Greater differential pressure exerted on the substrate by the forefeet than the hindfeet probably explains the Coffee Hollow trackways, like other manus-only sauropod trackways, but the possibility that they indicate unusual locomotion cannot at present be ruled out," the authors wrote in their paper.

"Although hypothesized unusual behavior would not necessarily involve 'swimming', it is worth considering the possibility that R.T. Bird might have been correct in thinking that (at least some?) Glen Rose Formation manus-only sauropod trackways were made by dinosaurs that were wading in water deep enough for their makers to punt, pulling themselves along by their forefeet, while their hind legs floated above the bottom."

Ultimately, the team said future discoveries will be needed to settle the matter – which means the punting sauropod still has a chance to wade into reality.

The findings are reported in Ichnos.

A version of this story was first published in January 2020.