What's Causing These Perfect Ice Rings to Form Around Rocks?

The images, naturally, went viral, but now the search is on to find a cause for the beautiful, icy phenomenon.

Over at io9, Katharine Trendacosta has compiled an amazing summary of the latest theories from Reddit.

Firstly, Rentalov offered up one of the most obvious suggestions:

My guess is the different depths of water in the pond caused it to freeze in increments, the deeper the water the slower the freeze. But I am in no way an expert on this.

A few others argued that stratification - the formation of heat-based layers in water - was to blame, or fluid turnover.

Right now, this double answer from IICooKiiEII and zcwright appears to be the winning theory:

I'm studying materials science and my guess would be that the ice particles would nucleate at the surfaces of the rock and continue from there, and this happened several times as temperatures could have fluxed and caused the freezing to stop. So the freezing basically started and stopped several times starting from the rock and then continuing from where the ice stopped, except when it continues where the ice had stopped, the new ice doesn't have the same crystal structure or is oriented differently, causing a mismatch in the ice.

I think you are on the right track. I would guess that a ring froze and then debris got stuck against the already frozen section. The freezing of the next ring would have a different crystal structure or lots of nucleation sites (and thus light scattering grain boundaries) that would cause the interface to be opaque.

Watch this space for updates, and send us your own theories.

**Update 29 November 2014:** We've had some really interesting and very plausible suggestions emailed to us about what could be causing these rings to form.

Jacob Cox, principal research chemist over at Green Science Corporation in the US, explained:

It seems that the mild surface currents are being frozen around the rock. Yes, the rock does have the ability to transmit heat, but it would have to overcome both the cooling  affect of air current and the water's heat capacity. The rock would irradiate heat but this would not have an extensive reach and would cool very quickly in respect to heat exchange. The final temperature of water would not be a factor as far as the rock/water heat exchange.

The lines shown are more likely to be a product of change in flow created by the prior ice sheets formed - the surface current creates viscous friction, slightly melting the outer areas of the prior sheets in the process, making a line [where] the currents are going around the obstacles formed i.e. the ice sheets. The air flow creating the surface currents would increase the evaporation, reducing the temperature of the water causing the most susceptible part of the water to freeze, the surface.

I think the rings form as a result of impurities in the ice being concentrated at the advancing phase interface. Each time the ice formation stops and then restarts, pure ice starts forming on the salty interface last produced and a new salty front is pushed out again. A bit like the formation of [Liesegang] rings in mineral formation, but in reverse.

It maybe that as the concentration of salts increases at the phase change advancing front, freezing stops or salt crystallization occurs, then the water freezing resumes without the need for a cycle of temperature variation.

While you ponder those, enjoy some more of odstane's beautiful images of the ice rings below, and check out Trendacosta's great piece over on io9 on more theories behind the phenomenon. 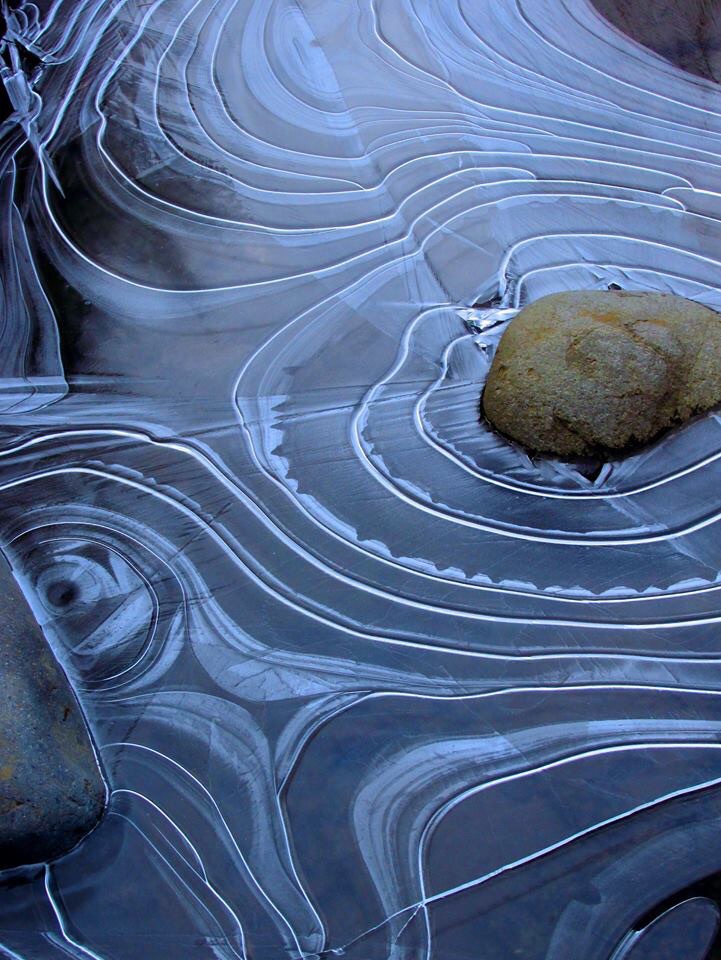