It's not easy raising kids. You bring them into this world, feed them, look after their every need, and what kind of thanks do you get?

Well, in the case of velvet spiders, a mother's pride in her brood is nightmarishly short-lived, because when food supplies run low, her crawling, many-legged children will ultimately devour her – and it seems they'll happily feast on any doting foster parents too.

A new study of Stegodyphus dumicola, a species of social spider, has revealed that virgin adult females in communal nests (aunties, if you will) chip in to help out spider mothers in the performance of their maternal duties, a phenomenon called alloparenting.

In the case of S. dumicola, this kind of foster care turns out to be disturbingly extensive in scope, and includes what researchers call "extreme and suicidal maternal care".

This, in other words, is what's known as matriphagy, where mothers give up their bodies to become a sacrificial foodstuff for their young – and for these velvet spiders, any unmated aunties from the nest join in on the deadly ritual, in an arachnid revival of virgin sacrifice. "[The] spiders literally start feeding on the female while she is alive," evolutionary biologist Trine Bilde from Aarhus University in Denmark told New Scientist.

"But there is no apparent aggression. It looks as if females are almost inviting spiderlings to feed on them."

Bilde's team would know. They set up close to 200 experiments over the course of 10 weeks to observe this grisly phenomenon at work, teaming up virgin and mated females in isolated nests.

Then they watched, as the makeshift family tended eggs, regurgitated food for spiderlings, and – ultimately – offered themselves body and soul to the next generation.

Researchers have observed this kind of fatally inclined alloparenting before, but never in virgin females. 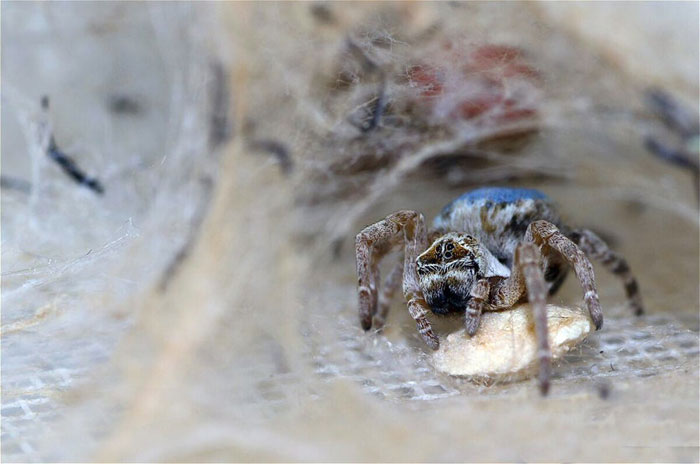 The team hypothesises the motivation is an evolutionary mechanism – because even if they're not your kids, from a genetic perspective, they're the closest thing a virgin auntie has.

"The more gene copies she propagates to the next generation, the better, so providing your body as food is a sensible evolutionary solution."

A rather more pragmatic perspective, held by ecologist Jonathan Pruitt from the University of California, Santa Barbara, who wasn't involved in the study, is that S. dumicola just isn't smart enough to keep track of whose spiderlings belong to who – but the end result is the same.

"I suspect that females merely aren't capable of discriminating between their egg cases and someone else's," he explained to New Scientist.

"The colony is composed of close kin, so even if females produced their own egg cases, there would still be a benefit of assisting a closely related relative."

So which is it? Do virgin velvets tend the brood to such horrific ends to ensure their own genetic survival, or because female spiders just aren't sure where their dang kids have gotten to?

We may never know the answer, but there's at least one thing we can be sure of: one should never question a mother's love, or an auntie's devotion – because those bonds are frightfully eternal.

The findings are reported in Animal Behaviour.