Why Do Mirrors Flip Things Horizontally But Not Vertically? Here's The Physics

Mirror image is a tricky thing, but it's pretty clear when you look at words in a reflection, that mirrors flip things horizontally rather than vertically. Or, at least it seems that that's the case.

For example, when you hold up a sign saying "Food" in the mirror", it reads a backwards "dooF", but the letters are still the right way up. Why is that?

And why, when you raise your right hand, does your mirror-self raise its left hand, but it still moves it up rather than down? How does a mirror know the x direction from the y direction?

This classic 2015 episode of Physics Girl explores what's going on, and it's an answer that's stuck with us.

Because, you see, the reason that things appear to always be flipped horizontally in the mirror actually has nothing to do with the mirror, but with us. It's because we flip them horizontally.

Try holding up that "Food" sign again, but then flip it vertically to face the mirror. You'll then see an upside down, but forward facing, "Food" staring back at you.

The reality is that the mirror isn't flipping things horizontally or vertically at all, it's actually flipping them along the z direction - the one that points out in 3D from a traditional graph. 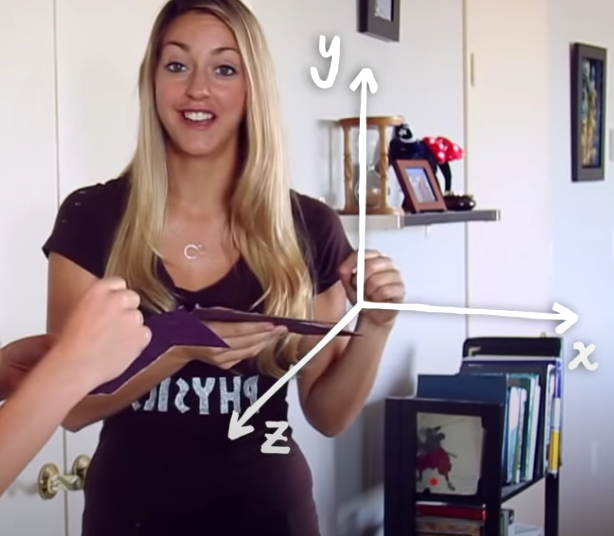 That might sound confusing, because it's hard for us to visualise the z direction when we're so used to seeing things along only horizontal or vertical axes - and because we're horizontally symmetrical, we don't notice that things aren't truly horizontally flipped when we look in the mirror.

But Physics Girl does an amazing job of explaining it in the video above with a left-handed glove.

To see how it would look in a reflection, you would need to peel that glove off and turn it inside-out. That's the true mirror image - no horizontal flipping required.

Is your mind blown? Yep, ours too. We'll never look in the mirror the same way again.

A version of this article was first published in February 2015.