One fascinating quirk of the Universe is that shapes and patterns can be found in hugely different contexts: the Golden Spiral can be seen in the human cochlea and the shape of a spiral galaxy; the fractal geometry of veins echoed in the branching of lightning.

In a bold new pilot study, an astrophysicist and a neurosurgeon have bumped it up a notch, using quantitative analysis to compare two of the most complex systems in nature: the neuronal network in the human brain and the cosmic network of galaxies in the Universe.

It's actually not that peculiar a comparison. You may have seen an image that occasionally gets shared around, showing a human neuron and a simulated galaxy cluster, side-by-side; the two look startlingly similar.

But there's a lot more to the human brain - and the Universe - than how it looks.

Writing in Nautilus Quarterly in 2017 they explained:

"Galaxies can group into enormous structures (called clusters, superclusters, and filaments) that stretch for hundreds of millions of light-years. The boundary between these structures and neighboring stretches of empty space called cosmic voids can be extremely complex.

Gravity accelerates matter at these boundaries to speeds of thousands of kilometers per second, creating shock waves and turbulence in intergalactic gases.

We have predicted that the void-filament boundary is one of the most complex volumes of the universe, as measured by the number of bits of information it takes to describe it.

This got us to thinking: Is it more complex than the brain?"

The starting point was working out similarities between the two. The human cerebellum has around 69 billion neurons; the observable cosmic web contains over 100 billion galaxies. That's one.

Both systems are arranged in well-defined networks, with nodes (neurons in the brain, galaxies in the Universe) connected via filaments.

Both neurons and galaxies have a typical scale radius that's only a fraction of the length of the filaments. And the flow of information and energy between nodes is only around 25 percent of the mass and energy content of each system.

Both of these are apparently passive materials that permeate their respective system and play only an indirect role in their internal structures.

With these similarities defined, the team next undertook quantitative comparison of the two, based on images. They obtained slices of the human cerebellum and cortex at different magnifications, and compared them to simulations of the cosmic web.

What they were looking for were similarities in the matter density fluctuations between brains and the cosmic web. And they found that the relative distribution of fluctuations in the two systems was amazingly similar - although on much different scales. 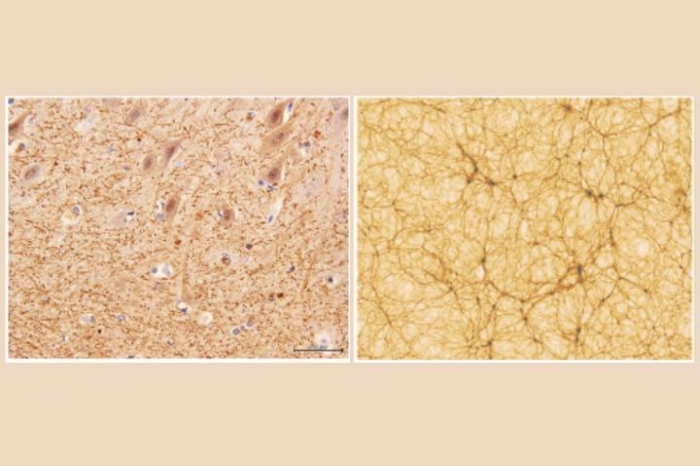 A slice of cerebellum at 40x magnification (left) and simulated cosmic web at 300 light-years a side (right). (University of Bologna)

"We calculated the spectral density of both systems. This is a technique often employed in cosmology for studying the spatial distribution of galaxies," Vazza said.

"Our analysis showed that the distribution of the fluctuation within the cerebellum neuronal network on a scale from 1 micrometer to 0.1 millimeters follows the same progression of the distribution of matter in the cosmic web but, of course, on a larger scale that goes from 5 million to 500 million light-years."

But that wasn't all.

In addition, both systems showed a tendency to cluster connections around central nodes. And both seem to have a similar information capacity.

"Roughly speaking," the researchers wrote in 2017, "this similarity in memory capacity means that the entire body of information that is stored in a human brain (for instance, the entire life experience of a person) can also be encoded into the distribution of galaxies in our universe."

That's not to say that the Universe is a brain, or capable of sentience. But it does hint that the laws that govern the growth of the structures of both could be the same.

According to a 2012 paper based on simulations, the causal network representing the large-scale structure of spacetime in our accelerating universe is a power-law graph remarkably similar to the human brain.

Studies such as this one, by Vazza and Feletti, could pave the way to better understanding those laws.

"These two complex networks show more similarities than those shared between the cosmic web and a galaxy or a neuronal network and the inside of a neuronal body."

The research has been published in Frontiers in Physics.