A family doctor's recommendation to follow a whole foods, plant-based diet coincided with a life-changing turnaround in the fortunes of one patient – potentially triggering complete recovery from a mysterious and painful disease.

Livedoid vasculopathy is a rare, chronic condition where painful and persistent ulcers form on the skin in the lower extremities of the body.

While it appears to be linked to cases of poor blood flow, no specific cause for the disease is known, and no commonly accepted cure exists, although some patients report successful treatment via anticoagulation drugs and compression stockings.

For many patients, however, nothing works well enough. For a long time, this described the experience of a 63-year-old woman in New Zealand  (warning: a photo of her symptoms below), who began showing symptoms of the disease in 2005, although it was only several years later that livedoid vasculopathy was diagnosed.

"Her usual symptoms were sporadically itching red blotches on the lower legs and feet, swollen feet, which would form into painful oozing ulcerations varying from small (1-6 mm) to large (>10 mm)," doctors explain in a case report.

"She had experienced ulcer outbreaks every few weeks to months since 2008." 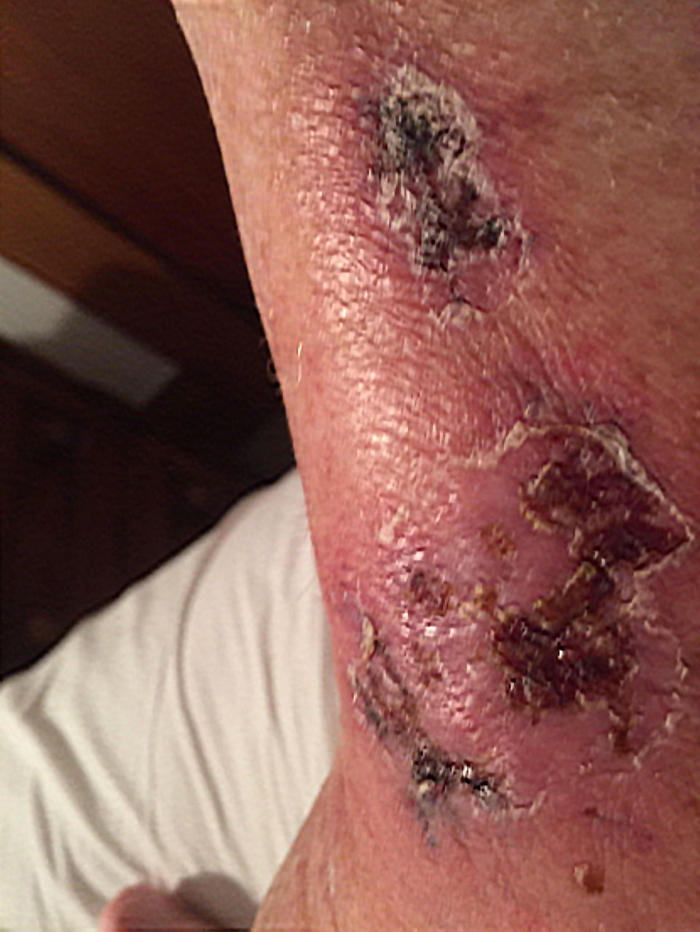 All it would take to trigger such outbreaks were clothes rubbing against skin or receiving a minor injury. She wore compression stockings to reduce ulcer formation and swelling, but the painful sores would quickly reappear when she stopped wearing them.

Aside from her livedoid vasculopathy condition, the patient's health was generally fine, although for years she habitually took prescribed ibuprofen (and sometimes codeine) to alleviate her pain.

During one flare-up of ulcers, the understandably desperate patient expressed a desire to 'try anything'. This led to a discussion with her doctor about the potential vascular benefits of a whole foods, plant-based (WFPB) diet – consisting of vegetables, fruits, legumes, grains, herbs, and spices, but excluding meat, dairy, eggs, fried foods, and heavily processed foods.

At the time, it was thought that the patient had capillaritis, a different dermatological condition that presents patches on the skin. The doctor's advice was based on the presumption that the dietary change, though not specifically tested as a treatment for capillaritis, might plausibly help blood flow in the vasculature.

"The WFPB diet has been shown to improve cardiovascular health with few to no side effects," the doctors note in their report.

In this instance, the dietary switch seemed to work wonders – or perhaps it was pure coincidence. Doctors can't say for sure, but either way, after committing to the WFPB diet, the woman's symptoms began to vanish.

At follow-up one month later, the patient's lesion healing had improved, with symptoms being less bothersome than they had been in years, the woman said.

A year after making the switch, she appeared to be in complete remission, showing no symptoms at all for the first time in approximately eight years, later describing the feeling as having "a new lease on life".

While it's difficult to know for certain whether the WFPB directly caused the changes in livedoid vasculopathy – or merely correlated with the patient's improvements – there is at least some evidence to suggest the dietary regime brought about the remission.

During the patient's recovery, minor lapses in adhering to the WFPB seemed to bring about minor bouts of ulcers, and a more significant break from the diet over a Christmas period – involving fatty meats, cheese, and oil – was linked to a worse resurgence.

"I lapsed badly," the patient explains. "Fish and chips, pies, ham and cheese sandwiches, and in Feb/March my feet developed those awful sores… I was in a lot of pain again."

Since that incident – and incurring a course of antibiotics to help clear up the ulcers – the patient has successfully committed to a 100 percent WFPB diet, and the doctors note her symptoms have been quiet ever since.

"Although livedoid vasculopathy can remit spontaneously, the immediate and repeated recurrence of severe symptoms on reduced adherence to the WFPB diet makes a causal relationship plausible," the researchers write.

As for what might be behind this hypothetical causation, it's hard to say.

"The mechanism is not completely clear," the doctors explain. "We speculate that the dietary changes directly affect vascular endothelial health, which in turn affects propensity towards a prothrombotic state."

It's possible, the researchers think, that the diet might help restore the healthy function of vascular endothelial cells, in turn triggering anticoagulant and anti-inflammatory effects, while a reduction in animal products and associated saturated fats could have positive effects on circulation that lessen inflammation.

Until we know more, the researchers say dietary therapy with a whole foods, plant-based diet should at least be considered as a potential treatment for cases of livedoid vasculopathy – but further research is most certainly warranted so we can find out what's really going on here.

The findings are reported in BMJ Case Reports.